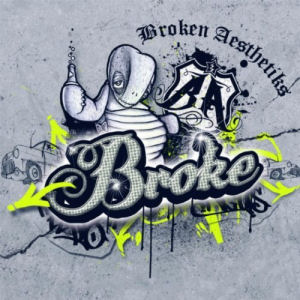 “Fact! Parliament no longer runs this country
Power moves and abuse are executed by major companies
Big corporations ensure we all get crushed
Doesn’t matter who’s in power, the average worker gets fucked
Fiction! Most crowds still got a love for this culture
Cause after flogging a dead horse the others pick like vultures
People say I’m critical with high expectations
I could wait for times to change but I don’t have the fuckin patience!”

MC/producer Angus ‘FatGut’ Younga and DJ Elev8 make up the Australian rebel rap crew known as Broken Aesthetiks. You certainly can’t fault Younga for his honesty when looking at his bio on or offline – and if he’ll forgive me I’m going to take it a step further and make it up to him on the flipside. He’s definitely got the fat gut down, but judging by his appearance you would also think he’s middle ages and has a receding hairline. Elev8 looks a little more suave by comparison – stylish haircut, well defined chin, the kind of guy who could probably blend comfortably into the same corporate middle management that FatGut is rallying against in the opener “Fact or Fiction.”

Even if they are opposites compared to each other, what Broken Aesthetiks have in common is that they are both completely unlike the comfortable stereotypes people have developed about hip-hop over the past 30 years. There’s no rule stating that fat middle aged looking Aussies CAN’T be great emcees, but that young defiant urban swagger people associate today with the likes of T.I., Lil Wayne, Maino and Kid Cudi won’t be seen in this Aussie rap team. It’s a shame then the group isn’t called “Broken Stereotypes” because by the time you’ve finished listening to “Broke” they will have changed your expectations. Melbourne can be just as brutal as the Motor City, and if Michigan can create Royce Da 5’9″ then Victoria can produce equally unapologetic emcees whose lyrical abilities exceed your expectations. Though he’d probably make a better body double for Andy Sipowicz than a hip-hop superstar, he’s ballsy enough to create an entire song called “Flyer Than Jeff Goldblum”:

“How I ever got laid in the first place is a mystery
When I bend bitches backs I leave ’em with muscular dystrophy
Oh you dissin me? Well step back sucker
You out of luck, the M in emcee stands for motherfucker
[…]
Two stupid juvenile immature fucks
Formerly known as DJ Elev8 and FatGut
But with rhymes this clever when we’re ever together
Call ourselves the deviant two, strapped in gimp suits made of leather
But seriously, who you know rhymin better than that cunt
trying to get laid by telling women he’s Daniel Merriweather?
Exciting like bringing hookers to a small get together
with a headline but the mistress wouldn’t let me off to tell her”

“Let’s start it off – these promoters get carted off
Got shit locked down like the years Hurricane Carter got
Effin’ know when I rhyme to spit fire on the beat
Proud to know your head’s tired from nodding to the heat
Find me under “talent” in Webster’s dictionary
Tellin talent like Nikki Webster that I got a dick to bury
Droppin heavy shit since N.W.A. – +Fuck the Cops+
And I’m so tight, I’m still waitin for the penny to drop
Women don’t like to meet me, they try not to greet me
Spend my nights being avoided in social events and evenings
Writing intricate rhymes is my everyday
Fuck your in-line poetry kid I’ll keep it insane
To emcees stay wide, I’ve been dope since grade five
I’m great live, hear these views on Dateline or The Grapevine”

It’s all the more fascinating and enjoyable to hear Melbourne’s equivalent of R.A. the Rugged Man (with possibly a better flow, and perhaps even better looking) simultaneously mock himself for being luckless with the ladies while having a better braggadocious shit talk than any wanker in a three piece suit ever could. FatGuy may literally have the skills to pay the bills AND get the punani based on what Broken Aesthetiks are working with – even if they’re as “Broke” as their album’s title suggests. With songs like the funk slap rap of “Strike Her Eyes,” the Linkin Park styled “Be Alright” with MysTorri, the light and lovely melody accompanying the heavy bass and flow of “Feeling Lost” and the spaghetti Western sound of “Watching the Wind,” there’s plenty to enjoy throughout this album. He may admit to not being the most handsome man in the room, but the same could be said of Biggie Smalls in his heyday, and he sure pulled chicks. I think FatGuy’s going to be okay in the bedroom AND the boardroom – he’ll rap his ass off until he gets what he wants in either venue.