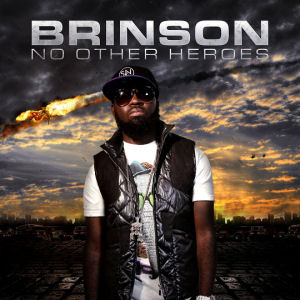 Brinson :: No Other Heroes

Brinson is arguably one of the more consistent gospel rappers out today in terms of his lyrical content and biennial releases. Now amongst the RR intelligentsiaopinion varies somewhatabout how effective his approach is. While I found Brinson to be a thoughtful rapper with good production who didn’t overdo his Bible thumping, Pedro ‘DJ Complejo’ Hernandeztook the view he was narrowcasting too much to a Christian audience and that while they would appreciate his message few others would. Nevertheless as the owner of his own GodChaserz imprint, he’s got the means to bring his message and that of his labelmates to the masses.

Now if I can pull back the curtain for a minute for the readers, Brinson reached out to me after our recent Lecrae feature. Nothing in life is guaranteed of course, but Lecrae certainly left me feeling more open to Christian rap than I had in a little while. After receiving both a digital and a physical copy I decided to delve into the review, but quickly ran into a problem – the GodChaserz website seems to be down. Every page comes up blank white, even the ones cached in Google, which leaves you with the uncanny feeling that the Rapture came and we’ve been left behind. That makes the digital copy convenient but useless for a review with no liner notes compared to the physical, so I broke the holy seal to see the real deal hidden inside.

Unfortunately the physical turned out to not have any liner notes either, so ultimately I’m forced to offer you the scant information on the back cover: “Executive producer A. Brinson Wright; Co-Executive Producer Wilbert ‘Juice2020’ Thomas.” As best I can tell that makes CStraight and ReadyWriter will be familiar to long-time site readers. To be honest I have no idea who Uncle Reece is though – he could be Brinson’s actual uncle for all that it matters. Let’s take a look at a solo track – the aptly titled “Chase God”:

“From here on out, dis here, is your anthem
We filled with the Holy Spirit, not a phantom
We spit out the holy scriptures at random
Uncomplex, in context of the text
Holy Bible revival, God vortex
Higher heights, deeper depths, yup!
Christ Jesus put us in the game, not the bleachers
So get off yo’ butt, and start preachin”

That’s a little more heavy-handed than Lecrae’s latest album, which is a bit of a role reversal for the two emcees, but Juice2020’s crunk style organs and thumping beat help carry the song. “3D Stand Out” featuring Jai also works due to the strength of its production and guest vocalist, the former providing a trunk rattling bass, the latter providing an uncanny imitation of Santigold to the point you’d swear it was actually her on the track. Other beats are a mixed bag. Juice was going for a ?uestlove style percussion on “Hit the Floor,” but unfortunately the drums drown out the rap. “Not Too Far” succeeds though – a 1980’s throwback beat and a sung hook by Niki Dawson. Imitating that sound was a wise decision – imitating the music and flow of Gucci Mane on “Jesus Is My BodyGuard” was NOT. This one idea alone was so cornball it nearly sinks the entire album all on its own.

It would be remiss not to mention Brinson has a song called “Most Importantly” on the album which isn’t a song per se – it’s his own call to the listeners to know Jesus in their life which quotes directly from Romans 10:9. It’s fair to say Brinson is not pulling any punches on this album – whether you like it or not he feels everything else on this album was LESS important than this one chance to reach out and bring more people to the Lord. I can’t fault his honesty on that though I can fault the fact that it’s indicative of the more forceful approach Brinson seems to employ this time around. There are times like “No Name” with CStraight where the GodChasing doesn’t feel like a Bible thump to the head, and then there are songs like “All the Way” featuring Champ you almost have to sit through like a Sunday sermon waiting until the lecture is over, bored in your pew. Then again there’s a reason most priests don’t give their sermons to a beat, and that’s why there’s a gospel genre of music in the first place. Brinson tries to do the rap equivalent, but on this album he tries too hard. It’s not indicative of his work as a whole, but it’s not a success in this particular instance.