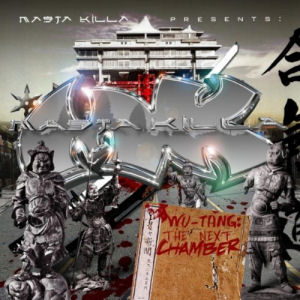 First off, let me start by saying that reading is fundamental. See, I was all set to go on this high horse tirade about how tactless Nature Sounds and Royal Lion Entertainment were for sending over a plain CD-R of this Masta Killa project…and then I read the press release. As it turns out, “Masta Killa Presents: The Next Chamber” is a digital-only release and as such, they were actually doing me a favor. Furthermore, to increase the amount of egg on my face, all the tracks were properly tagged and sequenced. So, moving along, for the benefit of anyone who has lived under a rock for nearly two decades, Masta Killa is a member of the Wu-Tang Clan. Back when the Wu’s debut album “Enter the Wu-Tang (36 Chambers)” dropped, I was a husky, greasy-faced preteen. As just about everyone else did, I had my favorites out of the group. My first was the late Ol’ Dirty Bastard, and I still have his “Return to the 36 Chambers: The Dirty Version” cassette somewhere around here somewhere. Shortly after that, it became GZA, whose “Liquid Swords” was the first CD I ever bought. A year or so later, “Ironman” switched my focus onto the artist that remains my favorite amongst the Clan today, Ghostface Killah. While I was aware of Masta Killa and his talent, he never stood out to the point where I felt I always needed to check for him. By the time his proper debut, “No Said Date” dropped in 2004, I had finished undergrad, was somehow still husky with a greasy face and more into the Houston sound and the then-fresh sounds of Kanye West the emcee. It’s not a knock on MK by any means, as he’s one of the best in the crew, it’s just that my tastes had changed some.

As an appetizer for MK’s upcoming third album, “Loyalty is Royalty,” he has released this collection of rarities that MK describes as “hors d’oeuvres, something to whet your appetites.” While only coming in under forty minutes in length, the compilation features at least one appearance from every Wu member with the exception of Method Man. “The Next Chamber” kicks off with “Rhyme Time Freestyle,” which as advertised, is a freestyle over the “Inna Gadda Da Vida” break that Nas’ “Hip Hop Is Dead” made famous. GZA and Prodigal Sunn join in on the fun as the trio proclaim “this is hip-hop and emcees get busy.” MK goes for dolo once again on the much too brief Mohawks-sampling “Scram.” GZA and MK team up again on the spacey “Just A Thought” and RZA tags in on “Money Come First.” The latter features that trademark sound from the Abbott, lots of adlibs and orchestral instrumentation. Wu affiliates Killah Priest and R.A. The Rugged Man get busy themselves on “Chains,” which boasts a slight ragga influence to the production.

“Fam Members Only” features both RZA and GZA, as the two of them, together with Killa, outline just what it is they’ll find themselves striving, standing, living and dying for. “Brain” is a quick verse that sounds like it may have snatched its hook from the old Kids WB cartoon, “Pinky & The Brain.” As one might guess, it’s all about relations with the opposite sex. The longest song on this compilation is “Always NY” which features guest verses from U-God and Inspectah Deck, as they flow over what sounds like a chopped up Curtis Mayfield sample from the “Superfly” soundtrack. Big Baby Jesus opens “Black Mamba,” but aside from a few lines from Ason, the rest of the song is passable to me. “Noodles Pt. 2” is the story of a robbery, relayed over a beat that is smooth as eggs. Things close out with “The PJs,” which features Raekwon and Pete Rock and “Metal Lungies (OG Version)” which is an alternate version of the song that appeared on GFK’s “The Pretty Toney Album” which featured Sheek Louch.

Even with the short length, long time Wu-Tang fans should be satisfied with this release. There’s no exploitation of the Wu brand here. Some projects of the past few years would bear the Wu imprint, but not much else. However, on this compilation, all tracks feature at least one Wu member. For any listeners that may have concerns about whether or not Masta Killa’s sword is still sharp, they can rest assured that it is. Standouts like “The PJs” and “Unstoppable Threats” make that point for MK. While perhaps not as popular as some of his Wu brethren, he can make a firm case for relevancy with the material on this compilation.