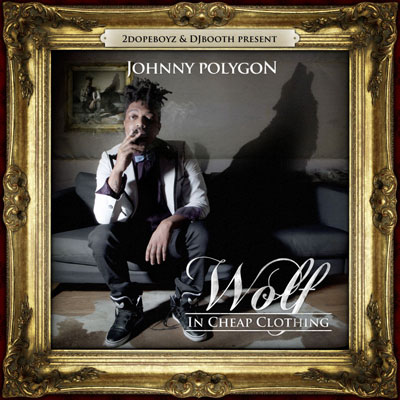 They say you never forget your first. Well, Johnny Polygon was my first. Now before you get your panties in a bunch and start sending me emails with subjects like “Pause” or “No Homo” or whatever other term you kids are using these days, Johnny Polygon’s “Group Hug” was the first review that I wrote for this fine website. In the time that has passed since “Group Hug,” Johnny’s popularity has increased, largely due to the success of “The Riot Song,” which even spawned a video and a remix with Kid Cudi. He’s had a few releases, namely “Rebel Without Applause” and “Catch-Up.” The latter was a collection of songs both unreleased and previously available tracks that dated all the way back to 2004 and even includes a couple songs that didn’t make the final cut of “Wolf In Cheap Clothing.”

During my first review, I felt like Johnny was doing a bit of experimenting with different styles, trying to see what works best for him. In 2011, I’ve come to understand that this IS his style, and if you don’t like it, that’s okay because your girl does. When Johnny sings, he’s usually belting out notes about some aspect of love or perhaps the more meaningful things in life. When Johnny raps, he usually touches on topics that portray him as the average Joe that just happens to make music. At other times, the two get crossed and it makes for an even more interesting listen.

“Wolf In Cheap Clothing” begins with rapping Johnny as he explains how a typical day for JP starts off. This entails waking up, smoking a blunt and logging on to the Internet to see what’s being said about him. He embraces the negative comments towards him, as Johnny says it makes him feel “mad official” because “if they’re dissin’ then, that means they’re listening.” Singing Johnny makes his first appearance on “Someday” and from this point on I’ll try to refrain from separating the two, as they are both Johnny Polygon at the end of the day. On “Fuckin’ Awesome,” Johnny’s singing to and about the ladies as he explains that he’s all about enjoying things as they are and nothing else: “You’re not my only one, but maybe you’re my favorite/ So let’s just keep on doin’ it/ We’re only havin’ fun, so let’s try not to change it/ Cause that would only ruin it.” On “Invincible,” Polygon is attempting to elude the devil that is out to get him. And for the record, the devil is said to have “amazing titties.” Now who can argue with that logic?

“Handle My Wasted” is a high energy track that mentions parties in places like Brooklyn, Paris, Oklahoma, Amsterdam and Rome, asking the listener if they can handle their wasted. The EP comes to a close with “Nevermind” and “Stupid Li(f)e.” On the former, Polygon deals with losing someone near and dear to him that seemed to be playing him for the fool the whole time: “I was reaching for the moon, hoping if I miss, we’d at least land on a star/ But I foolishly assumed, that once we got there we’d still be what we are.” Tough break, Johnny. We find JP at his most vulnerable on “Stupid Li(f)e” as he professes his love for his…stupid life. The “life” that he speaks of is comprised of sex, drugs and suicide, but Polygon is quick to say that it’s all a lie.

The world may never see what truly inspires Johnny Polygon, but while trying to figure it out, the music makes for a fairly nice listen. “Wolf” only solidifies the assumptions that I made nearly two years ago after listening to “Group Hug.” There’s songs for every mood and JP still does a good job at balancing things well. It would have been nice if “What Sadness” and “Benadryl John Pol” were included, but I’m just being greedy. As it stands now, Johnny Polygon still isn’t a square, and some might argue that he’s “Fuckin’ Awesome” regardless of the clothing he’s wearing.