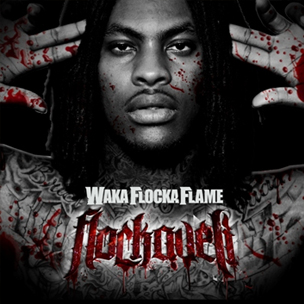 This album came out in October, but we’re just now getting around to reviewing it. In part that’s because we never got a review copy, and none of us were too eager to spend our hard-earned scratch on Waka. In part it’s because writing about Waka Flocka Flame’s music seems pointless and contradictory. This is not intellectual music meant for calm reflection and analysis. Waka makes music for the streets and for the club. If you are thinking about Waka’s music, you are missing the point.

Waka, aka Juaquin Malphurs, got his start backing his mentor Gucci Maine (his mom was Gucci’s manager until recently), and made some buzz with mixtapes before “Flockaveli” came out.  He’s had a string of hits in 2010, including “O Let’s Do It,” “No Hands,” and “Hard In Da Paint.” He’s also had some controversy. He admitted to not voting on BET, and brags about not being lyrical. His lack of lyricism has gotten him his share of criticism both by critics and by Method Man, who said “if you ain’t saying shit out your mouth, your time is very slim in this motherfucking game.” (Meth later apologized).

Waka ain’t lying: if there is one thing he is not, it’s lyrical. While his album references Tupac, lyrically he is from the school of Lil Jon and Rick Ross. His favorite rhyme scheme is to use the same word again, especially “nigga” or “motherfucker,” which you can tag at the end of any sentence. He raps about fucking, fucking shit up, and getting fucked up. Every other word out his mouth is a curse word, and two of the songs on his album start with “Fuck”. He mostly yells and grunts, and on the few occasions when he tries to get deep and spit some knowledge (like “Fuck This Industry), he fails.

Waka’s strength is not what he says but how he says it. Waka may not have shit to say, but he makes it sound good. He’s honed his craft by performing live, and he knows how to set a place off with a well-timed ad-lib. He knows what kinds of lines the crowd will shout along to, the kinds of messages that can be heard over booming 808s. Hip-hop started off with MCs rocking parties, and Waka can definitely rock a party.

“Fuck The Club Up” is an example of a song that doesn’t work on paper, but is gold when set to music.

“I’m just thuggin’ in the club
With my squad, bitch we deep
If a nigga jump stupid
Then it’s two things hands and feet
If I holla Squad Up like football bitch we blitzing
All hell finta break loose, this the anthem”

This is followed by the chorus, and one of of Waka’s best lines: “Bitch I’m drunk!” Waka sets the goonish, ignit lyrics to life, attacking his lines with an easy-going aggression, like he could either fuck you up or buy you a shot, depending how things went down. Waka’s got charisma for miles, which makes up for the lyrics he shouts out.

Waka’s lyrics are hard to defend. He celebrates the gangsta lifestyle, bragging about shooting people and rolling deep with his gang.  “Bang” is an execrable celebration of gang-banging, with a chorus of “We in this bitch throwin’ gang signs, mayne!!” “Bustin’ At Em” combines an irritating guitar-laced beat with a idiotic chorus of “Bau bau bau bau! Bitch I’m bustin’ at em!” When he reflects on the damage caused by the violence that surrounds him (“For My Dawgs”), his response is more violence. When he’s not rapping about gangbanging, he keeps it sexist, hedonistic, and materialistic. I’m writing this on Martin Luther King Jr. Day, and it’s hard not to feel disappointed that one of the hottest rappers at the moment is rapping about getting wasted and killing other people of color.

In Waka’s defense, he’s rapping about what he knows. He grew up in the projects of Riverdale, Georgia, and the street life is reflected in both his lyrics and his life: his brother was killed ten years ago, he was shot last year (“When my little brother died, I said â€˜Fuck school!'”), and he was recently arrested for possession of drugs and weapons. You don’t get the sense that Waka is either faking it or using his background as a selling point (although I guess he technically is). It doesn’t excuse his subject matter, but at least he isn’t being cynical about it.

Waka doesn’t exist to drop deep thoughts or commentary on the state of the world. He’s like the Motley Crue of hip-hop. He is here to rock, have fun, and get laid. He’s living a wild life and talking about it in his music. If he were a rock musician he’d be celebrated as someone who is keeping it real. The fact that his lifestyle is irresponsible and unsustainable is sort of the point, although the lifestyle he’s describing is more destructive and irresponsible than what the Crue were doing in their heyday. (The Crue did have their share of deaths, mostly due to drunk driving and heroin).

Most of the album is produced by Lex Luger, who also handled beats for Rick Ross this year (and OJ Da Juiceman and Tay Don and Gorilla Zoe and Kanye West). Luger’s style is to make beats as dramatic and bombastic as possible, piling on horror movie synths over ticking hi-hats. Tracks like “Hard In Da Paint” are prime examples of Southern rap, crisp and clean as a white T and icy as diamonds. The songs, like the lyrics, hit you in the guts in a relentless onslaught. Subtlety is not a forte of Luger or Waka.

My one real beef with “Flockaveli,” besides its glorification of violence, is that there is too much of it. At 17 tracks and 72 minutes long, this album is more Waka than anyone needs or can handle. Waka and his producers don’t offer a lot of variation, and it ends up being too much of a good thing.  He’s backed on the mic by a slew of rappers, including Gucci Maine, Pastor Troy, Cartier, and Wale, who offers some seriously dumbed-down verses on “No Hands.” The guests add some variety to the mix, but its basically sex, drugs, and gunshots from start to finish.

On an intellectual level, I don’t like “Flockaveli.” The lyrics are simplistic and goonish. The music is effective but all sounds the same. If I was looking for an example of what hip-hop should be, it’s not Waka Flocka Flame. On a gut level, though, “Flockaveli” works. It’s morally questionable, but it hits hard. The beats are banging, and Waka proves that owning a thesaurus and being clever aren’t the only way to be a rapper. Waka is a blunt instrument that beats you into submission, and “Flockaveli” is a big dumb rock record of a hip-hop album, a “Girls, Girls, Girls” for the traps. Even if you hate this album you like it, so why not give in?