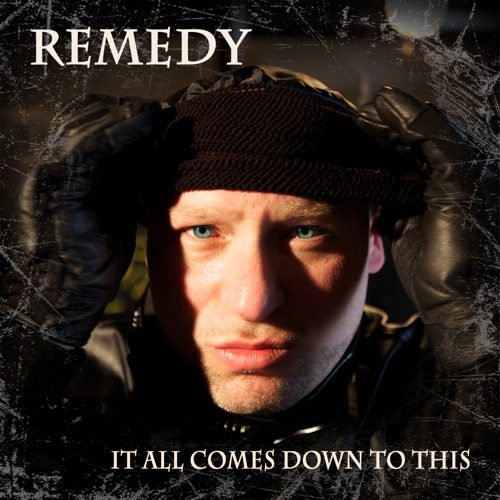 Remedy :: It All Comes Down to This

“I never claim to be the best white rapper/But have to, show these mothafuckers what I’m after.”

Quick, who is both the first white rapper and the first Jewish rapper to be affiliated with the Wu-Tang Clan? The answer is none other than Remedy, who first joined the squad of “killa beez” on a 1998 compilation CD. Since then, Remedy, who grew up in Staten Island, has started his own label and released several of his own albums, as well as albums from other Wu-Tang affiliates. Now Remedy is back with his latest mixtape, “It All Comes Down to This,” which features an interesting collection of freestyles, new songs, and previously unreleased tracks, only one of which is over three minutes long. One can pick out the Wu-Tang influences right from the beginning, as Remedy spits about hustling, life in the ghetto, and the state of the hip-hop game over beats full of soul samples, orchestral strings and brass instruments, and kung-fu movie dialogue. Unfortunately, the mixtape stumbles when it comes to lyrical content – Remedy’s verses are at times repetitive and clichÃ©d â€“ and delivers a handful of solid tracks surrounded by a number of songs that could use a little more polish.

If nothing else, “It All Comes Down to This” is a great collection of beats. Remedy and guests freestyle over classic Wu-Tang instrumentals from “Wu-Tang Forever” – “Heaterz” and “Triumph” â€“ and it’s refreshing to hear these tracks resurface from almost 15 years ago. There’s also the Wu-Tang-esque “2010 Re-Emergence,” which features a pronounced trumpet and a deep bassline with a high-pitched piano in the background. In a similar fashion, “StupidDumbRetarded” features a heavy drum beat and rolling bassline over an upbeat set of horns, as guest emcees Lounge Lo and King Just tear up the track. On “All a Dream,” Remedy samples the famous bassline from Biggie’s “Juicy” over a flowing grand piano, and he raps a slightly altered version of the first verse from “Juicy” that is modified to reflect his own life (“I let my tape rock â€˜til my tape popped/ Smokin’ on skunk weed drinkin’ 40s on the block”). Perhaps the best produced track, and the best overall song, though, is “Testimony.” Over a driving set of orchestral strings, Remedy and fellow Wu-Tang affiliate Killah Priest each spit a heartfelt verse. Throw in a crooning soul sample and a majestic chorus, and “Testimony” is easily one of the most complete and most polished songs on the mixtape.

Unfortunately Remedy’s flow just doesn’t mesh well with some of the more hardcore tracks, where he is often overshadowed by guest artists, and he doesn’t have the lyrical prowess needed to carry a full-length mixtape from start to finish. At times, his rhymes are overly simplistic as he raps about moving weight, carrying guns, and doing drugs. This is not to say that all of Remedy’s stories are not worth a listen; he goes back and forth with JoJo Pelligrino on “Transporting,” as the two emcees spin tales of their hustling endeavors over a mellow track full of meandering strings and pianos. Other songs, though, simply don’t measure up, and to be quite honest it is a little odd to hear someone on the late side of 30 still talking about drugs, guns, and hustling for money. Perhaps this is best exemplified by “You Ain’t a Hustler,” a very new-school, synth driven beat that really doesn’t fit in with the rest of the CD. Remedy’s flow is slow and monotonous, and his lyrics simply lack any creativity or cleverness. The same can be said for several other songs that Remedy tries to carry on his own, as his verses grow tedious on “Mob Pirates” and “Tonite’s Still Da Nite.”

The bottom line is that, while “It All Comes Down to This” is sound in the production department, Remedy is lacking in lyrical complexity, and as a result his stories of hustling and making money come off as rather clichÃ©d and unoriginal. There are some bright spots, and it is interesting to hear Remedy incorporate his Jewish beliefs and culture into his music, but other than that there is nothing to set the mixtape apart from any other similar release. A slew of guest appearances keeps things from growing dull, and “Posse Cut [Remix],” featuring R.A. the Rugged Man, Hell Razah, JoJo Pelligrino, and Blaq Poet, is admittedly one of the better songs on the CD. Still, this is not enough to rescue the mixtape from the depths of mediocrity, and while Wu-Tang fans might want to check out Remedy’s latest release for some familiar beats, they will most likely be disappointed by the lyrical content.

Remedy :: It All Comes Down to This
6.5Overall Score
Music8
Lyrics5.5