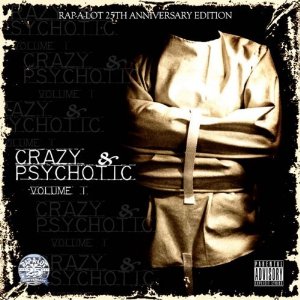 “Some crazy niggas out of Houston goin’ platinum…”

Quick, who is currently recording for Rap-A-Lot Records? Devin? Z-Ro? Trae? Scarface? Not to my knowledge. With the exception of Bun B, the label’s stars, all major southern rap artists, all jumped ship. The drought of signees coincides with the label’s 25th anniversary. Or maybe vice versa, as it may very well be lack of active personel that inspires the efforts to generate revenue with variously themed retrospectives.

“Crazy & Psychotic Volume I” hopes to highlight the label’s merits in exploring the dark hallways in rap’s psyche. Rap had perhaps always been a cathartic medium, but in Rap-A-Lot madness found an asylum that encouraged its inmates to confront their inner demons. The poster boy for Rap-A-Lot as rap music’s psycho ward is Ganksta NIP, who, (pretty much wrongly) credited as Gangsta NIP, makes two appearances here. Both “Slaughter House” (“Slaughterhouse”) and “Murder After Midnight” (“Murda After Midnite”) are off his third album, being favored over early works like “Psycho” or “Psychic Thoughts.” But you can’t really go wrong with the man who introduced himself in 1992 as “the craziest motherfuckin’ rapper on Earth,” since pretty much all of his shit is cuckoo. “Slaughter House” praises him as the “creator of horrorcore” (some might disagree there) and taunts, “Steven Spielberg, Stephen King, you wanna sue me? / Bushwick tried to kill them kids, he did all through that Child’s Play movie.”

Speaking of, “Crazy & Psychotic Volume I” makes one thing abundantly clear – Rap-A-Lot’s head nutcase in charge was always Bushwick Bill. The classic “Chuckie” exploits his shrill image and short height to the max, as he looks to the demonic doll from ‘Child’s Play’ for inspiration. The triumphant “Call Me Crazy,” off his first solo, is a fitting finale for the compilation. “Murder Avenue,” a solo track from “Till Death Do Us Part,” is vital mainly because of the afterword contrasting the fictional account you just heard with Jeffrey Dahmer’s bloody deeds. “I Just Wanna Die,” another solo track off a Geto Boys album (“The Resurrection”), is probably the last great Chuckwick moment as he takes us on a virtual suicide ride, pursuing his death wish behind the wheel while a dozing Willie D nearly becomes a collateral victim.

Bill is of course also present for “Mind of a Lunatic,” the epic hair-raiser from 1989 that intends to illustrate “what goes in the mind of a lunatic.” The classic GB line-up can also be found on “Assassins,” which is a bit unfair to Juke Box and Prince Johnny C, who originally recorded the song. The inclusion of “Murder After Midnight,” particularly the placement as the first song, is questionable since it – despite the “You could say this was a murder by a lunatic” sample – follows the simple logic of revenge. The 5th Ward Boyz never really made the insanity plea, but for the sake of variety “Got to Be Down to Die” (“Gotta Be Down to Die”) gets a pass. Z-Ro’s “Respect My Mind” does fit the bill with its extreme paranoia extending even to friends and kin, yet, as the lone more recent track, serves as an indication that in its later years Rap-A-Lot wasn’t that much of a madhouse anymore.

If the compilers would have dug a little deeper, they could have come across valid candidates such as Prince Johnny C’s “Love Crazy,” DMG’s “Psycho,” Blac Monks’ “Zillion Wayz to Die,” Do Or Die’s “Kill or Be Killed” or even Devin the Dude’s “Alright.” You can’t argue with “Look Into My Eyes” by Scarface, especially not the therapy session of the second half (with its spooky conclusion that a psychiatrist suggests to his patient he will find all answers to his questions in the Bible) – at the same time the absence of earlier Face solo material like “Murder By Reason of Insanity,” “Diary of a Madman” or “The Wall” is notable.

The obvious dilemma of “Crazy & Psychotic Volume I,” however, is that it omits “Mind Playing Tricks on Me” and “Ever So Clear,” both quintessential purgative songs that possessed a psychological quality unheard of in rap, because in the label’s opinion they likely belong on a more ultimate collection. (In “Mind”‘s case, that would be “Number 1 Street Hits.”) Exhaustive or not, the themes discussed and feelings expressed on this CD are an essential part of the Houston label’s historical relevance.