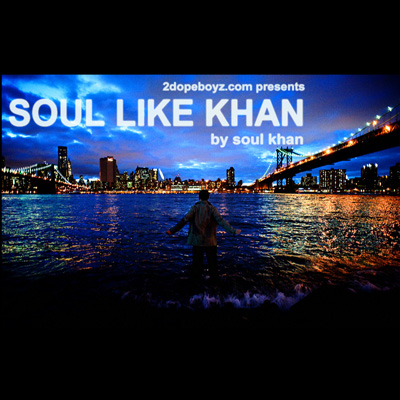 “This is 1995 colliding with the future/Maybe I ain’t got the kinda style that ya use to/Fuck it I’ve been writin’ since the cryin’ of the rooster.”

Soul Khan is a battle artist. A member of the New York hip-hop group Brown Bag All Stars since 2008, Soul Khan has become a household name in the underground rap scene and has traveled across the country to battle emcees. And these aren’t the type of rap battles from “8 Mile,” where Eminem defeats three opponents in a row over tracks such as “Shook Ones, Pt 2.” These battles are done acapella, with no instrumental to help carry the emcee’s flow, and thus battle rappers like Soul Khan need to be lyrically sharp and quick on their feet in order to succeed. Often times, though, battle rappers simply do not carry over well when it comes to an actual album, where the focus is less on witty punch lines and put downs and more on overall lyrical depth. Soul Khan, though, makes a nearly seamless transition on his debut solo album “Soul Like Khan,” which he first began working on two years ago after moving from Los Angeles to Brooklyn. Produced largely by J57, the album not surprisingly has a very soulful and jazzy feel to, creating an old-school sound that Soul Khan blends with new-school elements of hip-hop in his rhymes.

For an album that clearly emphasizes the impressive lyricism of Soul Khan, the level of production from the likes of J57 and others is remarkable. “Shot Glass Magnified” features a crooning set of horns and trumpets and an upbeat jazz piano that resembles the piano from Nas’s “Memory Lane,” giving the song a mellow and lighthearted feel. “Invisible Hand,” on the other hand, is a much more aggressive track driven by deep horns and a hard-hitting drum loop with scratched in lyrics for a chorus, as Soul Khan raps about coming up and getting signed in the hip-hop game. Perhaps the most impressive track, though, is “Minyan,” which is produced by J57 but features live violin and guitar from Rebecca Waine and Will Mogey, respectively. As the sweeping violin serenades the track, Soul Khan spits one of his best verses of the album:

“It’s like ten times a day, I play the janitor
Sweeping up the stairway to Heaven clutching the banister
And each steps a mile high
So I ascend with deep breathes and wild eyes and never lose my stamina
Whether God exists or is just a fraud or a myth
He better tell me what to build before the fucking water shift
I was named for my grandmother’s very young brother
Who was shot and buried with others in various clusters
He was slain at 16 so why you play with 16’s
I’mma always hold it down for the weight of his dreams”

Despite the notable production efforts, it is ultimately Soul Khan’s skill on the mic that drives his debut album and makes it such an enjoyable listen. In a day and age when mainstream rappers are packing less and less into their lyrics, Soul Khan carries over his talents from battle rapping and makes every verse feel meaningful and heartfelt. His powerful delivery allows him to take over tracks, as is evidenced on “Fahrenheit” when Soul Khan starts rapping over nothing more than a simple piano and a soothing choir sample and absolutely kills it. Then there’s “Place That Birthed Me,” which is a clever take on the typical “rep your hometown” song that captures the true spirit of Los Angeles. As the second verse opens, Soul Khan raps: “I could spit a reference to different intersections/But that wouldn’t capture California in it’s essence,” and he ends the song describing his transition from the West Coast to life in the fast lane of New York. Finally, there’s “For That,” Soul Khan’s moving ode to hip-hop, to the music that helped shape and direct his life. Over a flowing grand piano and a simple drum loop, as he dissects his family and personal troubles growing up, he spits: “The boom bap never let my sanity crack.”

The bottom line, in case it wasn’t already obvious enough, is that Soul Khan knows how to rap, plain and simple. His experience coming up as a battle rapper clearly shines through on “Soul Like Khan,” which is chock full of tongue-twisting lyrics and carefully crafted stories that paint a picture of Soul Khan’s life in the hip-hop game. What’s more, the jazzy and soulful vibe of many of the tracks gives the album an old-school feel that golden-age hip-hop fans are sure to appreciate. Soul Khan’s lyrics carry weight, whether he is rapping about the struggles of being an underground rapper or the pitfalls of relationships, and his raw delivery offers a stark contrast to some of the more mellow, easygoing instrumentals. Those looking for a rap album with some actual lyrical depth should look no further than “Soul Like Khan,” an impressive debut from an emcee with nowhere to go but up.