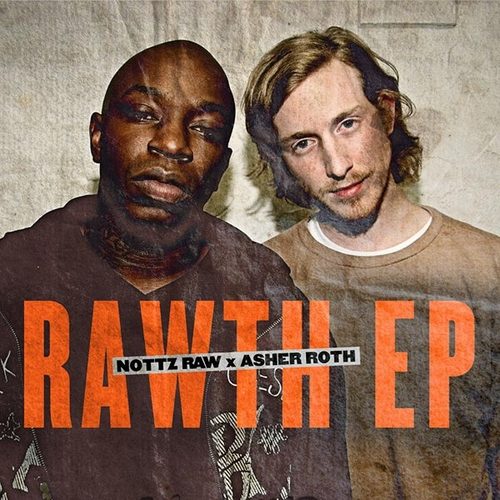 “When I cook crack for rap stars I’m bred to do it
Nottz Raw, speak this hip-hop shit so damn fluid, I
shit out drums and wipe my ass with sheet music”

From Snoop Dogg to Scarface, from Game to G-Unit, there’s no doubt that if you consumed a daily diet of hip-hop from across America in the last decade plus you heard at least ONE Nottz beat on a hot-ass album. He’s just that ubiquitous – everybody seems to love the sound that he throws down and even your favorite rapper’s favorite rapper wants to rap to his instrumentals.

Then there’s Asher Roth – the white bread rapper who got a leg up into the industry with the help of DJ Drama and Don Cannon, then won over frat boys everywhere with his party anthem “I Love College.” Roth’s trademark is a quirky sense of humor which has been compared both favorably and negatively to the only somewhat similar stylings of famous white rap artist Eminem.

The reason for these two to collaborate on an EP are at least on the surface obvious. Roth certainly isn’t going to turn down a chance to spit bars to a Nottz track, let alone more than a half-dozen of them. The already established Nottz doesn’t really have anything to prove, but working with Asher Roth pairs his name in the limelight with a currently popular rapper, keeping the value of his name and his production skills high. Rappers shopping for someone to take them from unknown to globally known hear the Nottz tracks on a free Asher EP and say “Whatever his price, I’ll pay it.” Boom – Nottz stock just went up.

The title “Rawth” is a clever play on splicing their names into one mutant whole sans use of a teleporter. The “Roth” part in it is easy to see, but how “Nottz” factors in is a little less obvious until you realize that the producer sometimes refers to himself as Nottz Raw. There it is: Raw + Roth = “Rawth.” Now that you know who they are and why they decided to put out this joint EP, there’s just one question they’d like to ask you: “Don’tcha Wanna Be? (My Neighbor).” And yes, the sample that opens the song is the one you’d expect if you grew up watching Fred Rogers on PBS.

Asher Roth: “Welcome to Morrisville P
About 25 minutes North of Phil-lay
Where I was born and raised, and I learned my ways
Yo the Morrisville pool, man those were the days
With the birds and the trees, and the nice summer breeze
When you’re bare feet, careful, don’t step on the bees
And center field for my little league team
Third place in the state was a pretty big thing
At sixteen I was cut from JV
So I had to figure out what I’d do in my free…
time, although meanwhile
I would hang out with Footy, and I’d freestyle
On a beat I’ll, get funky for money
Yeah buddy I’m a budding Doug Funnie
Unlike the rest of the elements… I was Arrested Development
Speech was incredible on ‘Mr. Wendal’
And since then I blend with the pencil”

Asher Roth’s reputation for delivering punchlines and telling whimsical stories is fairly well established at this point, but what comes as a surprise on “Rawth” are the times when Nottz ventures out from behind the boards to spit bars. Over the whistling melody of “In My Mind,” the man better known for his beats shows an unexpectedly fresh ability to flow:

“Slick muh’fuckers should be charged for rape crimes
Suckin the game dry like vampires
Suckers messin up the game, where’s the umpire?
You’re just a pawn muh’fucker, just call me sire
It’s real hip-hop here, I’m what the streets desire
This here grown folk music married to hard bottom
Tell my Nottz Raw fans across the world I got ’em”

The songs on “Rawth” are hard not to like. “Gotta Get Up” is a light piano riff with one of Asher Roth’s trademark “lazy college bum” raps, with a hook sung by D.A. from Chester French. “Coming & Going” works the opposite end of the ivories. It’s heavy as hell and features a cameo from the still underrated Rhymefest, who brags “See I don’t know if I’m idealist or realist/I just know me and Nottz are the illest, so feel this” – and you do. As if that weren’t enough, the industrial raw guitar riff backdrop of the “Run it Back (Remix)” features a guest rap from Canadian rap sensation Kardinal Offishall that steals the show.

“I’m in Depeche Mode, trading my Tears For Fears
I’m lookin at the double rainbow, laughin at queers
who try to act like there’s somethin to see here – fuck that!!
Hardcore fans know you shouldn’t be here
I am in a league that you can’t try out for
BITCH, you’re still half and half, a damn minotaur
You’re half man, but an all out pussy
I’m cool but I’ll FUCK YOU UP if you push me!”

I’m still undecided on Asher Roth in general. It’s not that he’s done anything that I hate per se, but it’s just that sometimes Asher Roth is a little TOO lackadaisical to actually be taken seriously as an emcee – especially when compared to the intensity of the very guest stars heard on this EP. Regardless it’s eight songs from Asher Roth and Nottz, completely for free, and if that’s not a win in 2011 I don’t know what is.