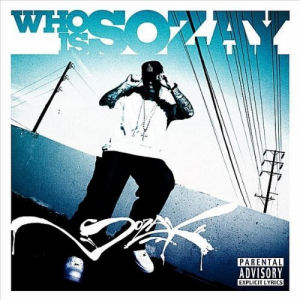 “The greatest trick the Devil ever pulled was convincing the world that he didn’t exist.”

Some movies become influential far beyond their initial release. Over 25 years after the release of Brian De Palma’s “Scarface,” nearly every part of the movie has found its way into pop culture in general and hip-hop music specifically. Rappers sample from the dialogue, imitate Al Pacino’s signature way of speaking as the lead character, loop background and transitional music from the film for beats, and even the film’s sound effects have become DJ scratches. In another 10 years “The Usual Suspects” may have reached similarly legendary status, as Kevin Spacey’s portrayal of Roger ‘Verbal’ Kint continues to influence the worlds of pop and hip-hop. Much like Houston rapper Brad Jordan chose the name Scarface to give an appropriate air of menace to his rap tales, Emmet Flores chose Sozay to reference the seminal performance of Spacey, who in the film’s denouement was revealed to be the near mythical gangster Keyser Soze everyone in law enforcement had been looking for.

Sozay’s had enough hard knocks in his life that referencing a fictional gangster for inspiration is not unwarranted. By the age of 16 he was already having frequent run-ins with the L.A.P.D., at a time when their unchecked abuse of police power had just led to the Rodney King riots. Not long after that he became a teenage father, did a five month bid for stealing cars, and started penning raps in prison to pass the time. This was not the beginning of his fledgling rap career though – he didn’t come out and go right in the recording studio to make a clean break from crime to rhyme. No – Sozay went right back into the life and ultimately wound up doing a 15 month stint in the federal pen for drug smuggling. It may be that in Flores’ case he just couldn’t start doing right until he had done enough wrong for two lifetimes, but the federal bid turned out to be his real wake-up call. Despite getting knocked by parole violations and music industry setbacks, Sozay pursued a degree in music engineering, determined to hustle legit and make money one way or another out of rap even if it wasn’t as the star rocking crowds on the M-I-C.

Thus we have the Sozay of 2010, the one who has been on a nearly 20 year journey to reach the point of releasing his “Who Is Sozay” EP. It’s a fair question to ask given his rap career has took this long to materialize, yet his long years of experience lead to him sounding far from a rookie in the studio. Even though Flores could probably produce and master the album himself, he’s left those duties to Ed Faris on these eight songs. That might strike some as curious given Sozay could have saved a buck or two doing it himself and put that money into his promotional budget, which would perhaps lead to less people having to ask who Sozay IS. On the other hand after waiting this long to put out an album to the masses, why take a chance on going after a rap career halfway? Turning over the duties allows Sozay to focus on his rhymes entirely, and on “High Hopes” he benefits from it:

“I see it, I call it, the writing’s on the wall dick
Just look how you all get in front of this culprit
Ladies grab their purses, gentlemen their wallets
Cause momma’s little boy’s a thieving alcoholic
All it takes is one look to spot what’s missing
Life’s a urine stain cause I got no pot to piss in
State law makers seems they got a mission
Employ me full-time duckin warning shots in prison
People say ‘Emmet, c’mon, where’s your optimism?’
I look on the bright side but demons block my vision
Got no competition, but I still can’t get ahead
A disgrace to my mom, and I would bet my head
at times she looks back and regrets she kept her egg
Matter fact, I ain’t hugged my moms since I wet the bed
Some days I want to tie a noose around my neck, instead
you know an Optimo filled with with ‘dro will get my head
(Hiiiiiiiiigh, so hiiiiiiiiigh)”

If you’ve gotten the idea that Sozay uses rap as a way to vent his anger and frustrations, you’re on the right track, but the irony on “High Hopes” is that he pairs it with beautiful pianos and stirring R&B samples. Perhaps “One” is a better summation of his darkness, as it opens with a Usual Suspects sample and bangs out like a DJ Muggs beat that would back B-Real or Sick Jacken:

“Dance with the Devil, some say hallelujah
The new guy in town like the U.S. in Fallujah
I refuse to lose the game, each goal of mines
accomplished no accomplice to unfold the crime
Fools ain’t worth five bucks if they came with a bowl of dimes
Took that chain up front or you leave to go behind
Hold the line, no retreat, fuck that I fold your spine
Like meth labs in Alaska, I got the coldest lines”

Sozay prides himself on an antagonistic and unapologetic flow that blows through instrumentals, and being “So L.A.” in his attitude and his presentation – in fact he has a second song with Los Angeles in the name: “L.A. Kings.” He’s also got an unconventional marketing tactic – a nearly 12 minute song called “Guerrilla Warfare” with NO cleared samples that urges the music industry to sue the shit out of him for them “because I need the publicity.” Perhaps that will work. It’s more likely what will work is the strength of his convictions and his long time waiting for this opportunity, though he nearly fucks it off with the unnecessarily contrived pop AutoTune crossover song “Last Call.” This EP would have been better off without that song, but I’m willing to be more lenient with “Miss Ready Go” given it has a sound and feel Westside Connection fans can relate to. Maybe Flores will be better known after this EP and people won’t have to ask the question “Who Is Sozay” any more. I have the feeling though that like Verbal Kint’s story his career will be long and convoluted – the ultimate difference being that Soze didn’t want to be recognized while after years of obscurity this rapper would like nothing better than to be a household name. He’s on his way.