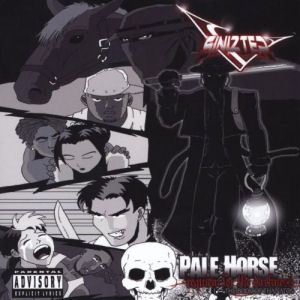 Given his decade of experience in the music business one would think V Sinizter would be a much more familiar name to rap world let alone the general public. As an underground rapper from Saginaw, MI he made all of the right connections to work his way up the ladder, he won a competition at the 2002 Gathering of the Juggalos festival and earned a coveted one year contract with ICP’s imprint Psychopathic Records. For the know-nots this doesn’t sound impressive, but having followed the marketing muscle of Michigan’s facepainted hatchet warriors, V was poised to reach millions of eager supporters worldwide who put their money where Violent J and Shaggy 2 Dope tell them to. This was the big break V needed; a lifelong malcontent whose bio claims a disturbed history of spousal abuse, drug abuse and (if taken literally) Satan worship. Sadly this relationship didn’t pan out and Psychopathic debut “Hunting Season” didn’t meet sales expectations. We can only speculate what happened but undoubtedly both sides pointed fingers: V blamed ICP for not doing more to market him, ICP blamed V for not doing more to craft music that would appeal to their juggalo fan base. The relationship ended and V Sinizter sank back into the Michigan underground seldom to be seen.

V Sinizter was not to be denied though, and even though it took eight more years to crawl up from the underground to the light, here he is again with “Pale Horse: Requiem for the Darkness.” That determination alone is a success to be applauded given how many rappers give up after a record deal goes sour and/or they’re held down by one too many bad breaks. Still V may in some respects be in the same unenviable position he was before – largely unknown outside his core niche. Therein lies both V’s gift and his curse – when you search long and hard enough online to learn more about his Sinizter ways he’s invariably pegged as a “horrorcore” rapper. That’s a subset of hip-hop that only has a few big names (see Brotha Lynch Hung and Esham) who have achieved relatively mainstream commercial success. Those who have succeeded combine excellent production with a lyrical flair that makes even malevolent and macabre tales musically enjoyable. Those who don’t rely on a disaffected youth who don’t fit into materialistic commercial rap yet also don’t neatly pigeonhole into the (let’s admit it) sometimes elitist rap underground. They further rely on diving that group into those with a predilection for the occult, a fascination with mortality, a brooding dark soul that is often for right or wrong pegged as being “goth.”

I think that’s more than enough preamble to fill you in on what “Pale Horse” is all about, but those who understood the reference to the biblical Book of Revelation already guessed V’s tendencies before now. Whether his bio plays up his persona for marketing effect or not, it’s fair to say from listening to “Requiem for the Darkness” that V fits the horrorcore genre to a tee. In fact he’s even trying to prove his worth as a gothic rap artist by summoning spirits from the great beyond on songs like “Seance”:

“Alcohol’s got my vision’s blurred, I’m perturbed
cause of an incident that’s occurred, leave my life disturbed
My girl’s left the Earth; it’s ironic that the liquor I drink is the reason
that I’m seizing – a fatal car crash stopped my baby’s breathing
Seein her in the hospital the next day, got me hostile in the worst way
I wanted to pop a pistol underneath the chins of the teens
who deems it necessary to drink and drive
And put the lives of others on the road to jeopardy
while driving intoxicated! Didn’t worry the consequences
Now both of them dead, but they took my baby along with them
Minutes turned to hours, hours days, days weeks I can’t sleep
I just weep, all I wanna do is hear my baby speak
one last time, anything to know she’s doin fine
So while surfin the internet, I came across a find
Future medium, with divine gifts to talk with the dead
Maybe this’ll be the thing that gets these dreadful thoughts out my head”

If you’ve seen any horror movie ever in your life, then you’re aware that these best laid plans NEVER work out as expected. You don’t bring dead pets back to life, you never call on the spirits of lost souls to speak from beyond the grave, and for God’s sake don’t dump toxic chemicals in a cemetery and not expect bad shit to happen. The good news is that V Sinizter is certainly a storyteller worthy of Edgar Allen Poe, the bad news is that his tales translate much better in print than they do musically. In fact they might even make good Hollywood scare flick scripts. If we read the song titles they indicate the cinematic inspiration that V is working with: “Night of the Living Dead,” “Abracadaver” (sounds like a splatstick film from Peter Jackson) and “The Dead Will Return” to name a few.

Let’s just be blunt about it – V Sinizter missed his calling in life. His flow does nothing for me – he sounds like a poor man’s Tech N9ne; and even though it’s not his niche per say N9ne does dabble successfully in the occult from time to time. The difference is he doesn’t offer a full album of it and at 23 tracks and over an hour long “Pale Horse” is much too much; a brooding zombie film fest of songs that are musically gruesome and not in a good way. When he goes for upbeat party music on tracks like “RX Death” it’s actually worse. Still some songs do rise above the mediocrity of Sinizter’s self-produced tracks here and there such as the nearly Cypress Hil sound of “Die by the Sword,” the hard rock distortion rap of “Fear the Reaper” and the aforementioned bass heavy “Night of the Living Dead.” A limited selection of V Sinizter songs would make an above average EP, a top notch producer might even take it above that, but in all honesty it’s fair to suspect Sinizter is where he’s at in his career because he’s not willing to conform. He’s making his music his way, and being just as dark and melancholy as he wants, knowing there’s an audience out there for it. The purpose of this review is not to ask V to trade on his artistic integrity and make a more commercially successful album, but it’s fair to say he might make a better living writing horror movies instead of rapping them on his dire beats.