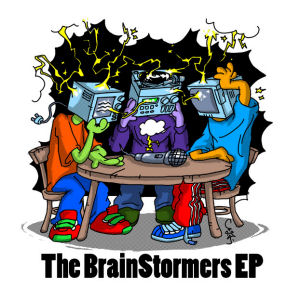 The BrainStormers make a bold statement even before you download the free EP on theirEnter the Wu-Tang” and the “Jurassic 5 EP” on their very first try. Being just “decent” or “aight” wouldn’t do when you consider yourself to be the successors to hip-hop classics, conceived in their legendary greatness.

We’ve got good news and bad news for The BrainStormers, but let’s start by introducing you to their lineup. Cayoz Da Beast hails from California, A.L. Laureate is straight out of Florida, you’ve probably already heard Virginia’s Praverb the Wyse by now, the newest member of the posse O*Zee is coming out of Maine, and Dj Grazzhoppa hails from Belgium. In terms of regional diversity they’re actually doing a good job rivaling Slaughterhouse, and they even get Crooked I to make a cameo appearance “4 Corner Vision.” In fact guest appearances are a strength for this EP in general. The apocalyptic and harrowing bars of Hell Razah blend seamlessly into the slow and gothic beats of “Righteous Soldiers.” Skyzoo seems perfectly home on the keyboards and scratches of “Proceed With Caution,” a song that makes the most of the line “every verse hits hard like a Kimbo right” on each hook. Even ManChild from underground favorite Mars Ill steps in on the album’s finale “Same Start.” Two thumbs up for being able to being able to pull in favors and get this level of guest talent on your debut.

The bad news for The BrainStormers is that it ultimately doesn’t make their album that memorable. It’s unfortunate their press release had to go the route of comparing them to other hip-hop supergroups, but since they did it’s unavoidable to mention that each of those groups had distinctive personalities despite their large size. When you think of a classic Jurassic 5 track, the deep and powerful vocal tones of Chali 2na immediately leap to mind. The first time you heard a Wu-Tang Clan song, you knew you’d remember the calm composed intelligence of a GZA flow or the drunken insanity of Ol’ Dirty. All members of Slaughterhouse were already rap stars going in but you know Royce Da 5’9″ each time he drops a punchline. After thirty minutes of this EP I can’t begin to tell you who was who or which emcee was a star. It’s not as though any of them are terrible, sloppy or bad. The bars you hear weren’t written down in haste, recorded in a half-ass manner, and produced with beats so appalling you don’t want to listen. Each track is above the level someone could make at home on Fruity Loops – just not by enough.

The word for this collective isn’t “legendary,” it’s “competent.” They’re not bad, but not memorable. The only rappers I could quote from as memorable in this review would be their guest stars, and I’ll be the first to admit that’s unfair to all of them. In trying to create a great collective like the rap groups of the past who inspired them, they forgot to have at least one member who pulls the rest of the group up with him. Leaders of the New School needed a Busta Rhymes to make Charlie Brown and Dinco D shine that much more brightly. No one wants to play second fiddle to a superstar, but if you don’t have one to begin with, who will even pay attention? If these rappers sit down and brainstorm again, hopefully they come up with the idea of an EP where each rapper gets one whole song to shine brightly. The Wu-Tang Clan was smart enough to have tracks that showcased individual members like Method Man and make stars out of what would have otherwise been anonymous members of the crew, and the BrainStormers desperately need to do the same.