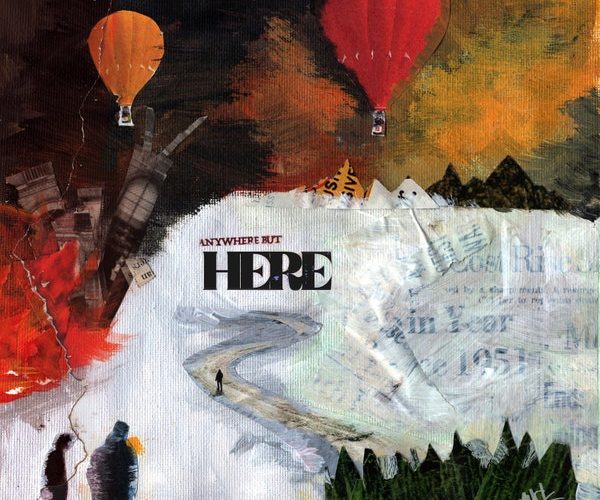 Joey Bada$$ is an Oscar-winning actor. That’s wild and something I feel has been under-reported; however as Joey’s star shines brighter each year, his Pro Era crew seems to be left behind in the rear mirror as the main man drives onwards to bigger and better projects. Members Chuck Strangers, CJ Fly, and Powers Pleasant have all put out new material in the last year, but it’s often Nyck Caution’s material that catches my attention most. After a strong collaborative effort with Kirk Knight in 2017, Nyck returns with his first solo album “Anywhere But Here”.

The title is apt as Nyck often finds himself sharing pain, negativity, and regret. It’s not exactly NF-levels of misery, but when coupled with laid-back production from Flatbush Zombies’ Erick the Architect and Freddie Joachim (who is on fine form) – it’s an album powered by grief, particularly the loss of Nyck’s father, as shared on “December 24th”. It’s an emotional way to start your debut album but it captures raw energy that clearly catapults the Brooklyn emcee through a very honest selection of songs.

Most honest is “Dirt On Your Name”, with lines like “It’s hard to save for a rainy day when everyday’s a rainy day” capturing the mood of anyone struggling at the moment. I felt that. There are some more experimental moments that aren’t necessarily bad, but just stick out like a pair of sore thumbs. “Bad Day” with Denzel Curry has that crunchy electro-hop style he’s known for but it’s quite jarring in the middle of a fairly chilled tracklisting. Similarly, “What You Want” leans into the trappings of, well, trap; I’ve just never been a fan of that distorted bass effect it uses. Even on excellent headphones, it sounds like that vibrating car at the traffic lights with music too loud for its system.

“Don’t get too caught up with things
That you know we don’t have control of
Don’t waste too much time with people
That distract you from your glow up
‘Cause once you grow up, you outgrow
Pеople that you thought you could never lеt go of
That’s just how it go
Colder than I was a couple years ago
Sad to say it but the motion has a movement of its own
I don’t wanna tell these short-term people all my long-term goals
That’s just how the ride goes“

Joey pops up on “How You Live It”; a lively collaboration with all sorts of nods to childhood favorites like Dipset and D-Von Dudley. The production certainly leans into that modern New York style as Nyck likens himself to Cam’ron despite his quotables being more likely something Noreaga would say. That admission to jacking off to help him last longer during intercourse is some way to start a track!

The highlight of the album is the single “Product of My Environment” thanks to Freddie Joachim’s beautiful little guitar melody and some killer verses chronicling how their upbringings shaped them, particularly Erick the Architect.

Of all the albums released during this pandemic, Nyck Caution’s “Anywhere But Here” manages to capture the somber mood of a planet that’s experienced pain, loss, and permanent change. More importantly for Nyck, he’s shown growth and solidified his style in a crew that needed some memorable examples of their craft. This is well worth checking out.