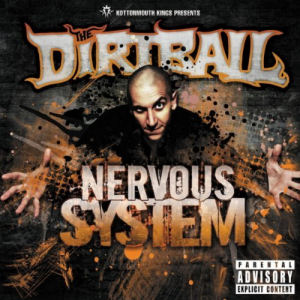 The Dirtball is back with his fourth solo album “Nervous System,” which is also his first album since officially being made a member of the Kottonmouth Kings on “Long Live the Kings.” Dirtball’s vibe is best described the way Nervous did originally in his 2008 review: “The Dirtball has a bit of swagger, a strong stage voice and the tracks do not make me just want to dance in place; they make me want to PUSH SOME DAMN BODY!” He’s a party rock rapper through and through, which is what made the Oregon native such a natural fit for California’s Kottonmouth clique. A typical Dirtball song, say “Anybody” from this album, will tend to be about taking pharmaceuticals in anything BUT the recommended dosage while trying to get as crazy at the club or house party as humanly possible:

“I feel the party party in my body body
My heart pounding pounding from the pills in my system
Anybody wanna get down?
Anybody wanna take a ride downtown?
Anybody wanna party with the party man
on the party plan?
[…]
Done ate a lot of pills on the 4th of July
My buddy Gabe was involved and between you and I
He bent off on a hot one, 20 pills deep
Lot of heavy tweakin ‘fore he went to sleep
He seemed okay, he was always a mess
But he never woke up, now he laid to rest”

The lyrics show that Dirtball seems to be walking a fine line between endorsing this behavior and warning listeners about it. If we were to take Dirtball literally at his word, he and Bizarre could have a contest for who pops more “Purple Pills” and he’d probably win. Dirtball professes that it’s recreationally fun to be reckless. On the other hand in the very same song he’s professing to get so high he feels like he could die, his friend Gabe actually DOES. Still one gets the feeling D.A.R.E. would not approve of his lifestyle, because Dirtball does his best to blur the line between telling a fictional character acting this way and his real life every day. The conclusion one comes to when listening to Dirtball for an hour is that he’s either as self-destructive in pursuit of the party life as he describes, or that he very strongly wants you to BELIEVE he is. On songs like “Party Parade” the first sounds you hear are of bong water bubbling up, before a funky saxophone sample mingles in the mix. Dirtball sings a little on this one:

“Well here’s a track for the people that be movin
It ain’t a crime if you wanna keep your party groovin
So form a line, any line, keep your car cruisin
It’s the summertime, ease back and strap loosen
Now grab another cold one, pull it from the freezer
Pour another shot of that shit and yell ‘Tequila!’
Slam it down, pound another party hard as ever
A hundred one degrees we blazin like the weather
I’m gonna die young – we dyin so baby stop cryin
Enjoy life, it’s a party parade”

The guests you would expect from the Suburban Noize family check in periodically for cameos, but it’s beneficial they are kept to a minimum, since they somewhat outshine him when they do. Daddy X’s performance on “Let’s Do It” is more entertaining vocally and lyrically than his compadre despite giving Dirtball the first two verses. Big B shows up for one of the biggest beat songs on the album, “Karma Bite,” a track which at least suggests Dirtball has a philosophical side beyond getting high. There’s also a Psychopathic Records cameo courtesy of Blaze Ya Dead Homie on “The Paper,” where he brags “My lungs are on fire/every breath is white ash/always gettin taxed for the split screens that I trash/in the studio/way before crack and Coolio/I was slangin dime bags out the front screen do’.” BYDH has always sounded like the long lost cousin of Shaggy 2 Dope or Violent J, right down to his dusty clown growl vocally, and this track is no exception.

The Dirtball is one of the artists who is hard to judge outside the context of the audience he is meant for. On that basis, anyone who likes the Kottonmouth Kings or who enjoyed any of his three previous solo albums would be perfectly happy with “Nervous System.” Dirtball’s speciality is definitely uptempo rip rock hip-hop party music, and most of these songs fit the bill perfectly. Some of them are even named for that very idea – “Bang Loud” would not work at anything other than top volume, “Move Back” is what you’d better do when people start moshing to the mayhem, and “No Cops” is exactly what you’d want if you were at said hot party. “Cops are not my friend/they won’t let me win/I will not obey/nowadays, any crime pays.” Does this album pay too? It certainly does for Dirtball’s loyal fans. Occasionally I can lose myself in the music and the moment too, but a whole hour of partying and popping pills does get a little redundant. Still “Cracka Now” is funny and has a good West coast funk synth vibe, “Rule the World” is a refreshingly minimalistic exercise in lyricism, and “Long Road” shows Dirtball is capable of self-examination. There’s more to this pill popper than meets the eye, but he’s very careful to keep up the image he cultivated and not let it show.