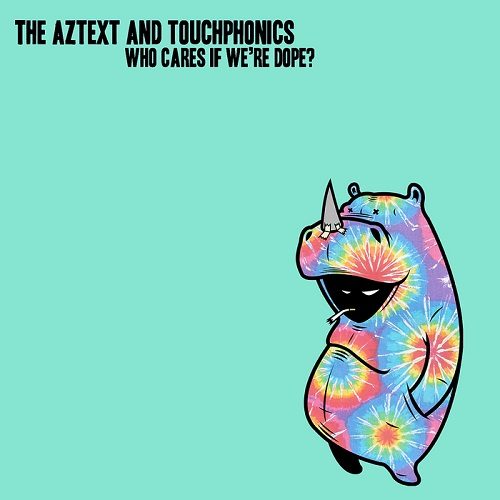 The Aztext and Touchphonics :: Who Cares If We’re Dope? Volume 2

When last we heard from Vermont hip-hop trio The Aztext, they had released the first of a four-EP project, “Who Cares If We’re Dope?” The concept is that each of the EPs will feature a different producer, and each EP will join together like Voltron to form an album at the end of the project. Volume One featured the sample-heavy, old-school leaning producer E-Train, and The Aztext were sounding a little defensive as they tried to find their place for themselves as artists who respect the classic hip-hop sound in a contemporary landscape. For Volume Two, they’ve decided if you can’t beat â€˜em, join â€˜em. They’ve teamed up with San Francisco producer Touchphonics, who provides futuristic and club-friendly beats. The boys are getting out of their comfort zone and trying on a new sound.

It starts off with the robotic “Cool Don’t Exist,” in with Pro and Learic trade rhymes about how they’ve outgrown a lot of labels that used to describe hip-hop, like fresh and def. The verses are solid, but the song gets dragged down by the hook. Things pick up with the future funk of “Doin’ What I Want,” in which Pro and Learic lay out their DIY attitude and their approach to music, rapping:

“I Make Records” offers a stripped-down beat for the MCs to spit about their craft. “Tear the Moon Down” goes totally left-field. It has a pumped up dance beat and booming bass, the kind of track that Pitbull might be rapping over. The Aztext manage to keep up with the fast tempo, and adapt their battle rhymes to the club-rap beat.

They save the best for last, with the laid back G-funk of “Till the AM.” Lyrically, it’s your basic song about partying with your friends, but the snapping beat and whining synths make it the best track on the EP. It’s also about being too old to party to the break of dawn, with Pro asking:

“Hate to admit
Am I jealous of a college kid
Vomiting all his gin in a garbage bin
All his friends laughing smoking on Parliaments
Arguing about which car he’s gonna be driving in?
Get sick to my stomach thinking about how long it’s been
Since I was sick to my stomach from partying
So tonight it’s bottoms up until the dawn again
I’ll be late for work
Somebody call it in”

“Who Cares If We’re Dope Volume Two” is another solid entry in the series. The Aztext are testing new ground and trying out new sounds while keeping true to themselves. They manage to work with Touchphonic’s club beats without sounding like they are out of their element. It doesn’t feel like they are trying to appeal to a different demographic as much as challenge themselves to do something different. The results are worth a listen.