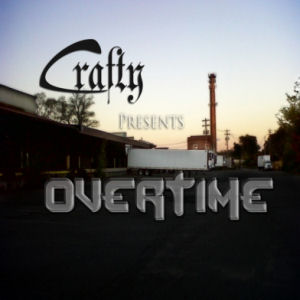 A message to all rappers out there past, present and future – I do NOTwant to listen to your answering machine on an album. I don’t care how clever you think it is that you can set a drunk, belligerent freestyle over the phone to a beat – don’t do it. Furthermore I don’t need to hear a concert promoter trying to sell you on appearing at some venue he had to put a thousand dollar deposit on while simultaneously trying to talk you into selling (at least) ten tickets to your friends if you DO appear on the show. If you buy Crafty’s album I’ve just saved you four minutes and fifty-one seconds of your life. You’re welcome.

Crafty falls into the 2011 trend of doing everything yourself – he’s the executive producer, he mixed and engineered the album, and it goes without saying that he raps on “Overtime” too. This is actually his second album though (the first from October 2009 slipped under our radar) and it would seem Crafty is already tired of having to hold ALLthe weight, so he’s brought in a whole slew of his friends and colleagues to do the rapping. That makes the tracks that are not only produced by Crafty but FEATURING Crafty something of a rarity here, which is a little disheartening given I wanted to get a real sense of how well he could juggle all these balls at once. On “This Feeling” at least, he’s got it down:

“Pimpin the white’ll keep the greenery lit
Or fuck with pills you can’t operate machinery with
It’s seen as a gift, but I’m cursed with the need to use it
Take a few for myself, liquor weed and music
[…] I feel it when I’m lit
Therapy, somethin I’m just killin the time with
A&R’s ignorin me, thinkin that I’ll quit
Livin in my septic tank, sleepin on my shit”

Though his strengths may on the whole be better suited to producing, the rap here isn’t offensive, unless you’re offended by someone chemically altering their mindstate. In that case rap music probably wasn’t for you in the first place. Still Crafty could work on improving his diction, or mix the vocals with the production better to make his words more clear, but it’s probably both. There’s not a lot of exuberance to his rap either, which is not to say he’s delivering the words unenthusiastically, but it is to say that it’s hard to form an emotional attachment to the voice you hear in your ear. He’s solid, not spectacular.

Turning over the mic spotlight on “Overtime” definitely steps things up, as Crafty produces better tracks for others than when he has to spit the bars too. The mellow notes of “Snake Oil & Bread” suit the low key delivery of Lifewhyz ideally. Quite Nyce turns in the most amped up performance of the whole album on “The End” and the slight bit of distortion in his vocals gives him a tinge of Vinnie Paz without the guttural phlegmy gruffness. As this album represents Massachusetts and the area in and around Boston, it should come as no surprise there’s a rapper named Green Monsta on “Brasshole” among other tracks. Sadly he’s one of the album’s less impressive representers, even though Crafty’s horny horn track supports him very well. The sleeper on this whole compilation is “Losing Daylight” – the guitar licks are haunting and the simple drum and bass track weave perfectly into Lifewhyz’ rap.

“Crafty Presents Overtime” is being offered by the artist and his record label of choice for the bargain price of $5, and for that little dough it’s hard to argue that you won’t get your money’s worth. Respectfully I would assert that I’d feel the exact same way if this entire album were instrumentals. I don’t hate Crafty, Lifewhyz or ActOne but I could take or leave most of the rest of these emcees even with Crafty’s beats. You also can’t help but feel like you’ve heard them before in a lot of cases – ActOne in particular has that “frat boy rap” sound of Asher Roth, but I do mean that as a compliment. For Crafty to have come this far in a couple of years is a plus, but he needs to step his game up going forward.