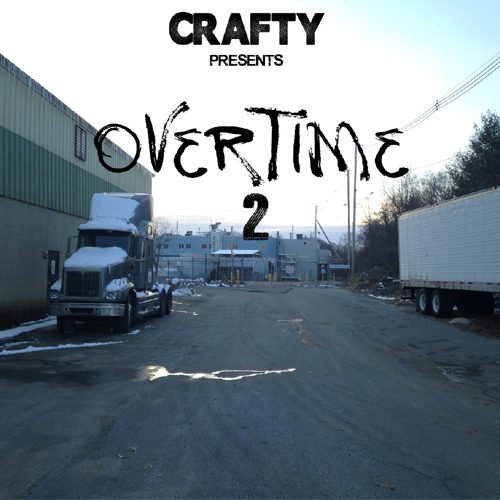 The hip-hop world was apparently clamoring for a sequel to 2011’s “Crafty Presents Overtime.” After his last release I felt that Crafty had established himself as a competent and perhaps somewhat above average regional Massachusetts artist, but I’d also be hard pressed to see the broader appeal nationally. The rhymes were inoffensive (perhaps to their own detriment) and the flows competent (at least not mushy and garbled) but the thing that stuck out to me immediately was jacking a familiar golden era rap song in Nice & Smooth’s “Hip-Hop Junkies.” Fast forward to “Overtime 2” and Crafty and friends did it again, with Dane Curley’s “Mr. Nigga” immediately reminding me of the Poor Righteous Teachers classic “Rock Dis Funky Joint.”

Let’s be clear about this – sampling (to me) is not a crime, and any loop you can find is fair game. Furthermore I can’t expect a generation of rappers and rap fans born since 1990 to know, remember or have even heard of PRT, unless they read on a hip-hop news website that Father Shaheed died in a motorcycle accident last year – still probably wondering who he was while they jam out to Chief Keef and Trinidad James. Time marches on and I accept that, but I do feel like someone in Crafty’s circle who is older than him could have said “You know this was already looped on a hip-hop classic and people are inevitably going to compare the two – your +joint+ might suffer by comparison.” It would be sage advice.

Back to “Overtime 2” though, a point at which the “Presents” part becomes worthy of recognition, because Crafty is increasingly more of an executive producer putting out a compilation of local talent. He’s got a “feature” on nine out of 19 tracks, but as with “Mr. Nigga” a lot of the time he’s not present unless it was on production. Neither the album insert on my physical copy nor the Bandcamp site on the digital copy offer clarification as to who did what on the boards. What I do know was that whoever produced his song “My Rock” did little to nothing to disguise the fact it was a direct jack of Kendra Morris’ “Banshee,” even looping her vocals for the chorus. (“Down to the bottom of a thousand ton well.”) I listen to so little pop/mainstream music that it’s laughable and I still recognized it immediately. That’s not jacking an old school classic no one’s heard – it’s borrowing almost entirely beat and melody from a song only a few years old. Other than changing the speed it’s the same song.

It’s not as though Lil Wayne didn’t do the exact same thing on the “Free Weezy Album” for the track “He’s Dead,” built entirely on “I See Ghost (Ghost Gunfighters)” by As Animal, so fair is fair. The tricky issue with sampling has become that the less obscure the loop, the more likely you’d better pay up and license it, and the less likely it is an independent artist like Crafty can afford the exorbitant clearance fees. One has to believe Wayne’s got the bank for it even with Birdman suing him for $50 million. Crafty probably just has to hope he can skate, so I’m going to stop listing all the familiar beat jacks on “Overtime 2” for his own benefit.

At over an hour long “Overtime 2” feels a bit excessive, although it does have its high marks. Crafty’s solo track “Half a Chance” is among the best with a simple and effective track, dead pan serious flow and verbal hip-hop snippets from Big Pun, Chuck D and M.O.P. on the chorus. Unfortunately as with many hip-hop artists there’s unnecessary homophobia laced in where a more suitable diss could have been used.

“I’ll return to my stomping grounds (I’M BACK) bitches
Let’s hear your last wishes, on money I’m mad vicious
Just as I check your bars, dissect your flaws, pulling cards
All you f#%@ts can die – just because”

Any number of disrespectful words would have fit there, and no shortage of them start with a “F” sound as well – frauds, fakers, phonies. Make it an adjective and even more possibilities open up – flimsy emcees, flashy emcees, foul emcees can all “die” without the extra hatred. Should I expect that level of thoughtfulness from a rapper who brags “I deserve a ribbon for never giving a f^#k” on the song “Wine and Macaroni & Cheese” though? No. And no hate for that – if he honestly doesn’t give a damn who he offends then I can at least respect him being up front about it and not making any pretense of political correctness.

Other songs worthy of note include the dark “self-absorbed weirdo” flows of Hibernation on “Puzzle With a Missing Piece,” the mellow backdrop of “Look Back” featuring Mike Murderer and Nala, and the jazzy instruments in the Crafty finale “Just a Dream.” There’s enough material here to be worthy of praise and admiration, and yet it drowns in the inability of Crafty to not “present” every single one of his friends while simultaneously trying to showcase his own work. Perhaps sticking to just one or the other would help. Aside from some overly obvious sampling choices and some unnecessary gay-bashing “Crafty Presents Overtime 2” is a suitable album to listen to, especially given it’s being offered as a free download (at least as of this writing) on Bandcamp. It goes back to the question I asked at the beginning of this review though – who outside of Massachusetts is going to pay for it? I’m curious how Crafty takes it beyond regional to a larger audience after having already paid dues for so many years.