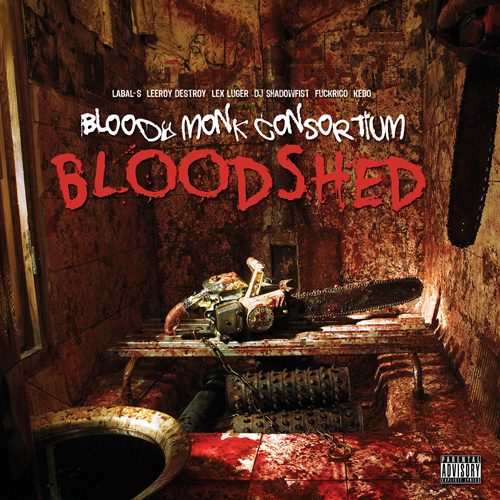 The geographically diverse and musically lethal Bloody Monk Consortium hit the internet with a free release in August of 2010. Their music sounded heavily derivative of adrenaline fueled East coast rappers past and present like Wu-Tang Clan and Vinnie Paz, but it’s not necessarily a bad thing to be derivative of good artists if it results in an above average debut EP. 48 studio tracks gave Lex Luger, FuckRICO and DJ ShadowFist the breadth and depth musically to set up Leeroy Destroy and LABAL-S for intense verses. The crew even shows their support for the elements of hip-hop by having an affiliated producer/graffiti artist named Kebo in the crew all the way from Italy. To make a long opening paragraph short, B.M.C. did a good job of setting the table and only needed to come back with an impressive full length album to prove their collective was not a hip-hop flash in the pan.

One thing is immediately clear about “Bloodshed” on listening – the plan was to come heavy with content this time. 21 tracks clock in at over one hour and ten minutes total. By weight alone the album would be a bargain at C-Rayz Walz joins guests Damo and Teton on “Run It.” LoDeck and Pumpkinhead fit like perfectly aligned pieces over the menacing Lex Luger beats of “Blood Letter.” mag0wl is a new name in the musical mix but he proves on “Shrink’s 3rd Eye” that his minimalist and Eastern sound are ideal for B.M.C. and special guest Pacewon.

Pace: “If you see me talkin to myself it’s cause I’m whisperin a prayer
I’m listenin to God not listenin to fear
And my raps are like paddles, blistering your rear
Spittin that game to your sister in her ear
Well at least I used to – now I’m married
My attitude is straight but my mood still varies
One minute I’m happy as Tiger Woods’ caddies
The next minute I’m down like bums in an alley
Steppin on emcees like a new pair of Ballys
My temperature more hotter than Cali’s”

The stars of the show are LABAL-S and Leeroy though, which is to be expected and is how it should be. The album peaks when all of their verses are strongly supported by B.M.C. production, and falters when the beats don’t stand up to their gruff voices and delivery. You might over time get the impression they need a throat lozenge, but LABAL puts it best when he says “Don’t ask me what the fuck I sound like/I’m comin off the mound like a hundred and twenty-three mile an hour strike” on “Logic Fly.” Coincidentally Logic Fly is also the producer for this song, with a constantly evolving instrumental of menacing melodies that sounds like the best of a mid-1990’s RZA track. FuckRICO comes through with many of the album’s gems – the appropriately “church” mood of “Fallen Angelz,” the low and slow gruesome “Axe Murder Blood Bros.” (complete with shoutouts to Dexter) and the black and white ivories of “Dead Speaks.” On the latter Leeroy says “I’m standing in my b-boy stance, summoning for my seance.” At every turn these Bloody Monks seem one song away from being consumed by their personal demons.

It’s unfortunate that this is where being derivative backfires. On a short EP you want to grab the audience by the ear and it doesn’t hurt if there’s something immediately familiar they can relate to in that short time span. Over a whole hour that feeling starts to change and you want some more diversity to keep things from being tedious. There are times that B.M.C. feel like the future of Gravediggaz if they were all alive and recording together today, having evolved in style and sound all that time. There are other times when it feels like they’ve got a formula and just stick to it: here’s our shitty lives, here’s the fucked up shit we see daily, here’s how we survive by meeting an eye for an eye. It’s compelling but only to a point, and by the final track “Exit” that point wears thin like Rebecca Black’s “Friday” – it’s a slow motion car crash you can only take so much of. The Monks are in some ways their own worst enemies because they’re trying so hard to be taken seriously. It stops being fun to listen to. It’s almost vexing that “Nightmare on Hemp Street” starts out with a jazzy uplifting trumpet and then changes up to a slow plodding “baddest motherfuckers on the block” track – don’t fuck with the listeners like that!

Much like when I first encountered the Bloody Monks, I feel there’s a strong potential for innovation and creativity from this group given the unique way they united coasts locally and hip-hop globally within their collective. At the same time, there’s something to be said for having fun, and the tracks with guest rappers or producers don’t sound quite as constipated as other parts of the LP. Obviously their style is what it’s going to be – heavy, dark, serious, and a little bit macabre. Gravediggaz tended to find the humor in the macabre though and “Bloodshed” often lacks that redeeming quality. I don’t think this is the last we’ll hear of the Bloody Monks and I certainly don’t want it to be, but I do feel more diversity of topics and musical style would be well advised.