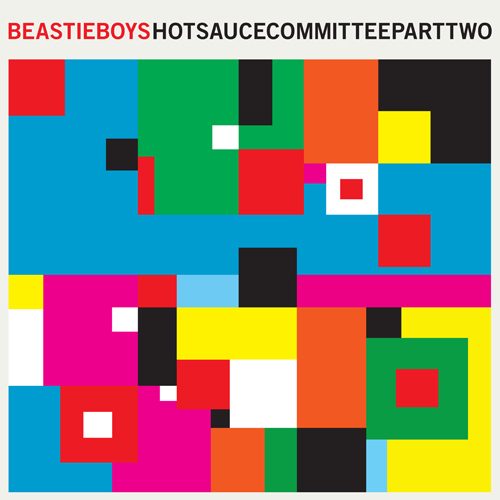 It may seem like a pun on “Hot Sauce” but it’s really not when we say there’s a burning question here: “What happened to Part One?” It was originally supposed to come out back in 2009 before the music world was stunned by the announcement that Adam Yauch b/k/a MCA had cancer. One single featuring Nas had already been released, but the rest of the album was put on hold indefinitely so Yauch could get treatment and recover. Nearly two years after that stunning revelation, the Beastie Boys are back on track with an album that is by most accounts largely comprised of what they planned for Part One ANYWAY. Confused? Don’t waste too much time thinking about it dunn, just get down to the funky sounds of the party anthem “Make Some Noise.”

Ad-Rock: “Here we go again, give you more, nothin lesser
Back on the mic is the anti-depressor
Ad-Rock, no pressure, yes, we need this
Cause the best is yet to come and yes, believe this”

MCA: “Leggo my Eggo while I flex my ego
Sip on Prosecco, dressed up tuxedo
Sippin coffee playin Keno, in the casino
Want a lucky number? Ask Mike Dino”

Mike D: “I burn the competition like a flame thrower
My rhymes, they age like wine as I get older
I’m gettin bolder, competition is wanin
I got the feelin, assume the lane and”

The self-produced track is a lyrical and musical venture back to their past, which seems odd given how many times the Boys promised via interviews that “Hot Sauce” would be new, unusual and even “bizarre” in some cases. Nonetheless it’s nice to have an old school inspired Beastie Boys song to party to, and that’s the level this works on perfectly. It’s not meant to inspire deep thought, it’s meant for you to slam down your cup then run out to the dance floor. “Too Many Rappers” will fill that intellectual void, with a drum track that borrows stylistically from the Bomb Squad and the Nasir lyrics that challenge hip-hop’s fraudulent lyricists.

“I had carte blanche, the vagabond
Nas is the narcissist, my pockets are rotund
I’m not a killer, but compared to you I’m more realer
You ain’t a shotter, mobster, or a drug dealer
A slug peeler you’re not, mafioso – nope!
You ain’t got the cut throat in ya, beginner
I ain’t tryin to hear your racket
You work for police dawg you snitch, you rat, you wear that jacket
[…] One, two, three
Too many rappers and there’s still not enough emcees
It goes three, two, one
MCA, Ad Rock, Mike D that’s how we get it done”

The more I look for all the musical insanity that was supposed to be on “Hot Sauce,” the more I find that it’s a traditional Beastie Boys album for all of the right reasons. “Crazy Ass Shit” has the trademark broken microphone distortion, with rhymes reverberating off the walls of the Grand Canyon, while “Mike on the mic” vows to get “stinkin nasty like the head cheese.” The Santigold duet track “Don’t Play No Game That I Can’t Win” has a Jamaican bounce and swing over which the Boys become playful supporters of the former Santogold, secure enough to let her come off as a bigger star on the song. “Funky Donkey” lives up to the billing and starts off whimsically by asking listeners to “put this on a zip disk (and) send it to your lawyer.”

Eventually the question has to be asked – can you take anything that these long-time New York hip-hop stalwarts say or do on “Hot Sauce Committee Part Two” seriously? It doesn’t matter! Before you consider that a copout, reflect on their career for a minute or two. Most of the great Beastie Boys songs you will think of off the top of your head aren’t that profound. You might eventually recall some songs with a slightly political or a spiritually Buddhist tint, but if we’re all being honest about it the songs like “Hey Ladies,” “Sabotage” and “Body Movin'” come first. Tracks with deceptively serious titles like “Multilateral Nuclear Disarmament” are nothing more than an excuse to break out their instruments and jam. It’s something they’ve done well dating all the way back to “Check Your Head” and they haven’t lost their touch. It’s not many a hip-hop album where you can be disappointed there weren’t more instrumentals, but this may be one.

Whether or not you can take the rhymes of songs like “Here’s a Little Something For Ya” seriously or not ultimately becomes far less important than whether you can enjoy the boom bap of the beat and how well produced their mixture of lyrics to rhymes is. On occasion the Beastie Boys have put a message in their music, and when they decide to make it a focal point it’s done well, but even an unsophisticated lyric has to have enough structure to be delivered over a mic and done with enough charisma to be considered fun and enjoyable. While there are some tracks that are experimental in terms of production, such as the industrial and gritty “Say It,” songs like “Nonstop Disco Powerpack” are far more the norm, with a style that goes even beyond the Boys’ own catalogue all the way back to Busy Bee and Kool Moe Dee. Frankly that works for me. Don’t go looking for the hidden meaning behind “Hot Sauce Committee Part Two” – the Beastie Boys are just here to fight for their right to party.