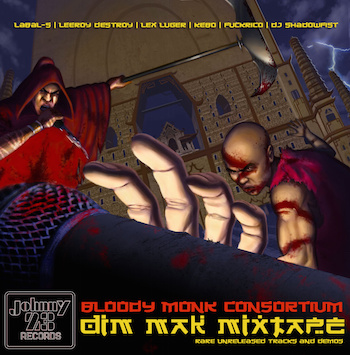 The Bloody Monk Consortium hit us with this release back in 2012, but it wasn’t until I experienced the unfortunate situation of water leaking into my basement that I found this unreviewed album on the shelf (thankfully still in the original shrinkwrap). That’s my bad. It’s now going to be a Back to the Lab review rather than a brand new album write-up, but if the old saying “better late than never” has any meaning I hope they appreciate us getting to it before the year 2014 came to a close.

The membership of BMC is large (Labal-S, DJ Shadowfist, Lex Luger, Kebo, Leeroy Destroy and F*@!Rico) and so is this mixtape – 71 minutes and 22 songs long. It’s billed as “rare unreleased tracks and demos,” and if I may segue for a moment, it bothers me when the word “rare” is thrown around casually. “Rare” is a T206 Honus Wagner baseball card. “Rare” is an “Inverted Jenny” postage stamp. Rare is finding a gold nugget of any size in the ground, and given what a single ounce of the precious metal is worth, it’s a potentially life changing event – which is exactly why it almost never happens these days. That’s what “rare” is – something that’s highly prized while simultaneously highly difficult to acquire. The very fact this album is on Bandcamp means it’s not “rare.”

Labal-S continues to be the show-stealer of the crew. “Regardless of circumstances I keeps it raw/certified organice, bars in the verse/solid as the Rock of Gibraltar/you never find me at the altar.” His husky voice is compelling and his breath control is ever so slightly reminiscent of Action Bronson – I suppose that’s his New Jersey/East coast style coming through. The album is punctuated throughout by samples about the infamous mythical Dim Mak touch of death. Due to the popularity of the Wu-Tang Clan since the early 1990’s, and the “Kill Bill” films since then, the fiction of the death touch still resurfaces now and then as fact – and the samples throughout present the death touch as though it were a real art which anyone could learn by carefully studying the pressure points of the human body.

On “rare” tracks like “Season of Feasting” the rappers of Bloody Monk are full of tough talk and bravado, noting that “fingertips lose grip when you grab the mic and spit bulls@%!” So even if the Dim Mak technique is fictional, it should be taken as a signal for how deadly serious the crew is. This has mixed results when stretched out over a long mixtape, because in this case rarity is not equivalent to selectivity. Overly long, poorly mixed tracks like the unfortunately named “Holocaust” were best left in the ground as undiscovered gems. Shorter tracks are not exempt either – the distorted bass and drums of “Rampage” could have been cleaned up before release – but instead sounds like the “demos” the title mentioned. Sometimes though the Monks find the perfect middle ground between unpolished and clean, and Lex Luger tracks like “Cutthroat” result.

Aside from unnecessarily homophobic lines like “Man these rappers either gay or they clitoris/pussy-ass lyricists” this is an example of what the Bloody Monk Consortium can achieve when they put it all together. The undercurrent of hip-hop elements on tracks like the Rico produced “Spraying Trains” is the glue that holds this crew together, and keeps them from being a random collective simply spitting their own bravado in an imitation of Wu-Tang Clan that’s a few years too late. Closing on the heavy piano keys and dark bells of “Knights” brings the long release to a satisfying close. Had they chosen their inclusions more carefully and shortened the length I could give “Dim Mak” higher praise, but instead I have to rate this one as a curiosity which is an interlude between their more important albums.