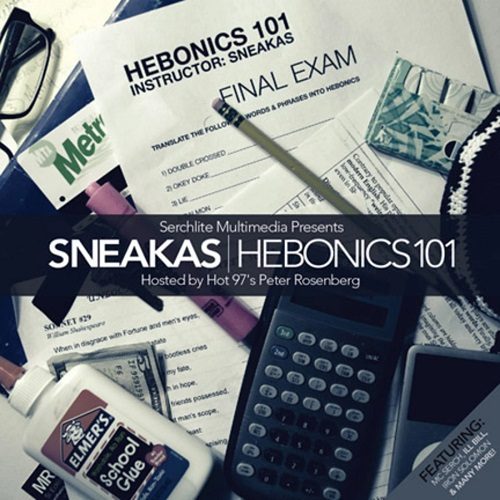 Who gives a damn about origin, heritage, ethnicity, and all those vague typifications of human beings anyway? I do, occasionally, because I think finding out about a person’s background plays a part in understanding him or her. Cultural upbringing defines us only to some extent, and the preconceived notions others have about it often prevent them from seeing our true self, but knowing what we are can help us and others understand who we are.

Background information of that kind should normally not have such a prominent place in a record review. Giving rise to those musings, however, is the featured artist himself, New York rapper Sneakas. Sneakas had a digital album a couple of years ago with some high-profile features, but, gimmicks be damned, it was the free mixtape “Hebonics 101” that caught my attention. A&R’ed by Serch, the release balances original material, jacked beats, Jewish New Yorker tradition and universal hip-hop culture.

“Shmok is way known
A goy refers to someone who isn’t our own
A shlemil is a klots, to collapse is to plats
When you snack then you nash, and salmon is lox
And if you got dirt you got shmuts, mazl you got luck
And if you got double-crossed you got shmok’d
With a shmekl you poke, like mishpokhe’s your folk
Yiddish ( ? ), a shpitsel’s a okey-doke”

The proper introduction to Sneakas follows afterwards with “Good Day,” which the Israeli-born MC concludes with “I’m not pro-Jewish, I’m a Jewish pro.” Wordplay and punchlines are the order of the day, involving LeBron James, Fonzie and a double entendre with profit/prophet – until Sneakas checks himself, “Stop with these Jewish jokes, would ya?” Only to drop another one, of course.

After putting a Yiddish spin on Kanye West’s “Monster,” Sneakas goes into a series of real songs, one of them even called “A Real Love Song,” a contagiously soulful joint he really puts his heart into. At the risk of losing slower listeners, he sports a fast flow on the decidedly OutKast-ish “Plastic Happy.” Heavy on political attitude are the video single “I’m An American” and “Better Now,” the former being more representative of Sneakas’ sublime approach (“We won’t have a black president till pigs fly / Achoo! / I’m sorry, swine flu [/flew]”), while the latter features a sloganeering host but redeems itself with the multilingual guest from Israel, Shi 360. “Summer in the City” is a lighter look at an adolescence spent in ’90s Manhattan (“For us the light at the end of the tunnel is Jersey”), while the Semite theme returns strongly with “Illjewmanati,” featuring a line-up Sneakas boastfully sums up as “the kosher Slaughterhouse.” The opening batch of rap samples referencing Jews and Hebrew is interesting in itself, and while Sneakas and Iron Solomon do okay, the vets steal the show, Ill Bill talking about his grandmother surviving the Holocaust and MC Serch quoting from his 3rd Bass days and making digs at one of rap’s reigning champs:

“I know who Jay paid – ME, I’m Serchlite Publishing
So when I’m gone my kids got money from Serchlite comin’ in
Let me give you a Hebrew lesson, it’s not (l’haim) – it’s ‘l’chayyim’
(Mazel tav) It’s ‘mazal tov,’ I know it’s hard, but bro, keep tryin’
We can break bread on a Friday night, we got good food, wine
So raise your glass and welcome to the faith, my dude, shine
I’m glad about your earnings, it’s still Weekend at Bernie’s
Jews pull the strings, just go ask your attorneys”

Competently hosted by radio personality Peter Rosenberg, “Hebonics 101” is a decent mixtape to build upon. If Sneakas preserves his playfulness and comes up with more quality tracks in the vein of “I’m an American” and “A Real Love Song,” he’ll hopefully get farther than the sadly slept on Hot Karl. To say it in Sneakas’ “grandma slang” – zol zayn mit mazl!