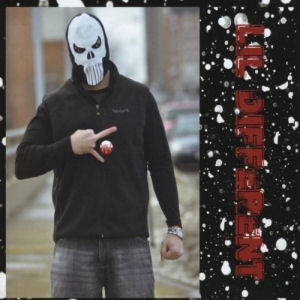 “I’ve been bringing nothing but the raw for the last ten years.”

This statement is a head scratcher if you don’t already know Angle or have his press sheet in hand. There’s nothing factually incorrect about it per se – his first album “Not Quite 90 in the Head” came out in 2001 and he’s been making cameo appearances on albums by Midwestern artists like AreCee, Coolzey and Tack-Fu in the time span from then ’til now. On the other hand “bringing nothing but the raw” implies something memorable, something so dope that listeners would immediately know him without any explanation required, something undeniable and unforgettable. Perhaps his press kit makes the point better than I will with this statement though: “Angle has opened for many hip hop artists including Atmosphere, Eyedea, Blueprint, Brother Ali, Murs, Vast Aire, Pigeon John, Prince Po, Qwel, Mr. Lif, and more.” I’ve seen at least a half dozen of those names do live shows within 10 miles of where I live and can’t remember anything about Angle from a single one of them. That makes Angle the textbook definition of “opening act” – the guy that’s not a star that’s there to kill time ’til the guys who are show up.

Now the vibe one gets from Angle’s artwork and the title of his album is that he’s a “Lil’ Different” in the same way that Tyler, the Creator is a little different. He’s not afraid to think outside of the box, say or do weird things, perhaps even shock you a little for the sake of making art. The thing that shocks me the most though is how all over the place the beats on this ten track album. It’s obvious that his producer of choice Tremayne does have some tools in the shed, and occasionally he pulls them out and shows us what he’s capable of. The minimalist instrumental and bass hits of “Tough Talk” set off Angle nicely as he talks about “the constant struggle, the rock and the hard place” of being a hip-hop artist. “Deadly Grounds” would be suitable for at least a Tech N9ne EP or mixtape if not a full length CD, and “My Opinion” is a P-Funk/George Clinton inspired track I have no beef with.

At the opposite extreme is “Cakewalk,” with a loop that’s so annoying it took only 26 seconds before I hit pause – before I finished typing this sentence. “Defenders” isn’t terrible, it’s just terribly cliche. “Sci Fi” seems paper thin – no layering of beats and sounds, a drum track that’s far too simplistic and doesn’t hit, and vocals that dominate the instrumental to an extreme degree. This is unfortunate because it’s not one of Angle’s best songs lyrically. It’s tempting to avoid being overly negative given I want to support Midwest hip-hop to the fullest, but I also feel I’m doing him and the scene both a disservice were I to not point out that he’s got to be capable of something less simplistic.

“Some random guy called and said ‘Hi I’m your bio dad’
Just want to make up for lost playin catch in the yard
I’ll teach you how to be a man and fix a damn car’
BULLLL-SHIT, that’s when my phone went click
Who’s the next to want to wipe my ass for Benjamins?
Ladies and gentlemen, with rabies and leather skin
I’ll wave at you standing in the storm you’ll be weathering”

A complete lack of enthusiasm lyrically isn’t helpful either. Angle delivers these lyrics like he just woke up from a long NyQuil nap, which I’m sure was exactly his intent – it’s just really hard to enjoy. I’m not saying Angle isn’t doing something a “Lil’ Different,” or that it’s not artistic, or that he hasn’t developed a following at least regionally that will support this album. If art is subjective, then I’m not quite into how “different” Angle is on this album. They’re either making the beats and rhymes simplistic to make a point about the overly intellectual underground rap scene, or this is a parody of certain low IQ mainstream popular artists that went over my head. If I couldn’t discern it as a reviewer, how will you as a listener? I’ll give Angle another chance because with more enthusiasm and a more choice selection of beats, those 10 years experience will probably pay off – it’s a shame it doesn’t here.