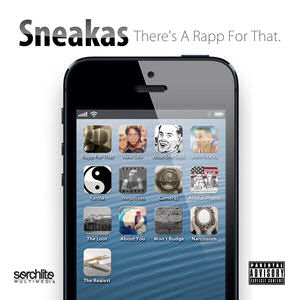 Sneakas :: There’s a Rapp For That

No, “There’s a Rapp For That” isn’t Sneakas mocking the information age, it’s simply his way of saying that rap’s got answers too. Being on the come-up, the New York representative would surely like you and me to focus on him while he has our attention. But I’ve always maintained that rap is bigger than one artist or the handful of stars the music industry promotes at any given time, and so when Sneakas declares on the opening title track, “This is real life shit, voice of tomorrow / cause freedom can’t ring in the voice of the hollow,” I’m not desperate to prove or to refute that the artist in question really speaks on “real life shit” and emerges as the “voice of tomorrow,” I view it foremost as an apt characterization of rap as an artform. Let’s bear in mind that rap has been providing content longer than the internet and dispenses everything from news, drama, games, counseling, lifestyle and nostalgia to smut.

The one challenge all rappers face is finding ways to address things. Run-D.M.C. knew that “it’s tricky to rock a rhyme that’s right on time,” but writing a song that is right for the times is another thing. Sneakas himself recalls spending “a whole album sayin’ I was sayin’ somethin’ / But I said that so much that by the end I said nothin’.” This time around he packs quite a lot into his songs. “Karma” illustrates the concept of karma through storytelling over a ’00s beat from main musical contributor, Detroit producer Dewitt Moore (DeNotes Productions), followed by the likewise philosophical “Negatives,” which is engineered by producer(s) //LXG from a straight drum track into a full-fledged emotional pop backing.

“John Starks” longs for the chaotic New York that gave birth to hip-hop culture, triggered by the ongoing gentrification of boroughs like Brooklyn:

There’s often a teasing tone to Sneakas’ raps, but he can be dead serious when needed. On “Neighborhood Watch” he collaborates with Bishop Lamont for a strong commentary on the Trayvon Martin case:

“Even in our mourning we got it ass backwards
We focus on the hoodies and forget about the blackness
But ask yourself this: I’m white and I’m young
If Zimmerman saw me, would he pull out his gun?”

“The Narcissism of Small Differences” is an intelligent exposÃ© on how hatred is always the strongest between people who are the closest, Sneakas taking a notably wise stance on the conflict in his old country:

“You think that Israel and Palestine is so different?
Ask both sides, they will tell you they the victim
But a little distance helps you see what is true
cause from 20 feet away you can’t tell who is who”

“Animal Pharm” denounces the role of big pharma in America’s health system in very clear terms. There’s a video for it, but the music itself perfectly highlights Sneakas’ technical acumen as his writing and delivery combine for a convincing song.

Besides cerebral subject matter Sneakas can also let go lyrically, but he always makes sure to wrap it in a neat package. Remy Redd supplies classic NY hip-hop samples for the hard-edged “Gimmie the Loot” featuring Boldy James. “That’s What She Said” is a light-hearted sparring match with Bishop Lamont to a blithe DeNotes production. “Won’t Budge” is anthemic power rap, Sneak’s announcement “Fuck who got next, I got now” followed by ambitious verses, the first concluding with “Look at where our dreams take us / I’m tryina grow old to the point where the candles cost more than the cake does” and the second spit at double time.

After 2011’s “Hebonics 101,” “There’s a Rapp For That” is a step forward for Sneakas. There is still room for improvement. He has yet to reach the level of mic authority his mentor MC Serch had back in the days as his flow is still a little bit stiff. He sometimes goes for the easiest punch (“You don’t need Beats by Dre to hear me”) and doesn’t go all the way with wordplay. Let’s take the description “Otto from the Simpsons, I’m takin’ these kids to school.” If you recall the circumstances under which the school bus driver takes the kids to Springfield Elementary, it’s a punchline whose untapped potential overshadows the actual punch. Why not set it up fully with something like “Let me give you a crash course in bein’ cool”? That’s not to say that he needs to enroll in Rhyme Writing 101 as offerings as diverse as “Animal Pharm” and “Gimmie the Loot” leave little to be desired.

In the end Sneakas arms himself against criticism with a multi-dimensional approach. Not everybody could rap over the ‘Who’s the Boss’ theme song and make it work, but Sneakas and producer (and former NBA pro) Moe Ager turn their version of “Brand New Life” into a spirited affair. “The Realest Shit I Ever Wrote” seems doomed to fail with its tired 2Pac quote for a title and early ’90s R&Pop beat, but the rapper overcomes the odds with his heartfelt recount of his journey with hip-hop. And while he ridicules Brooklyn hipsterdom, he isn’t above rhyming over “Cameras” by BK indie pop duo Matt and Kim.

In some ways Sneakas does evoke Serch, particularly in his loyalty to New York City and adhering to traditional values. A representative of a younger generation like Mac Miller is not going to come up with lines like “It used to be you had to mean what you say / but now you could say the meanest things without meaning anything.” Still Sneaks keeps it fresh and doesn’t dwell in times past musically. He finds in fact cool ways to take the old to the new, like when he plays on Pun’s “Dead in the middle of Little Italy” tongue twister with a Twitter joke, or when he lets a famous Mobb Deep line inspire him to get back at ex-girlfriends (“About You”). Bottomline, Sneakas shows and proves that there’s a rap for almost anything.

Sneakas :: There's a Rapp For That
7Overall Score
Music7
Lyrics7