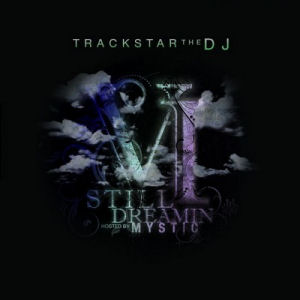 Last summer I couldn’t believe my good fortune to stumble upon a new copy of Mystic’s long out-of-print 2001 debut “Cuts for Luck and Scars for Freedom,” a great record that positioned the Oakland native as the next great female MC. Ten years later though, the follow-up has yet to materialize, and despite still showing up as a guest on West Coast projects every now and again she’s been an elusive figure, which is why I was a little surprised to see sistagirl was the host of Trackstar’s “Still Dreaming VI” mixtape. Mystic is the master of ceremonies on the St. Louis DJ’s compilation featuring a wide range of smooth hip hop tracks and R&B cuts both old and new.

“Still Dreaming VI” exudes feel-good vibes throughout its 80-minute running time. While I was already familiar with many of the tracks from prior retail releases, it proved a quite enjoyable compilation upon repeat listens. The hip hop tracks feature bright, soulful production, such as on Lupe Fiasco’s “Hurt Me Soul” from his debut and the Black Eyed Peas’ “The Way You Make Me Feel” from theirs, a song that might serve as a reminder to those who have forgotten the distant time when BEP didn’t suck.

There are a number of 9th Wonder produced tracks, including “Think Good Thoughts” with Drake, Phonte, and Elzhi. Other hip hop highlights include Outasight’s “Downtown in My Mind”; “Hey Young World, Pt. 2” featuring Dave Ghetto, Phonte, and Mystic; Apathy and Phonte’s “True Love”; and Pharaohe Monch’s “The Truth” with Common and Talib Kweli. Remixes include J. Period’s remix of “Changes” with Nneka, M1, and General Steele, as well as Headset’s remix of Mystic’s “OKâ€¦Alright” from her debut. The OutKast standard “Liberation” appears late in the tracklist.

The R&B selections are divided between 1970s standards and more contemporary material, with names ranging from Teddy Pendergrass, the Moments, and the Stylistics to Sade and Coultrain. My only complaint with the R&B selections is that the cluster of downtempo tracks at the end causes the mixtape to sag and drag a bit, but for the most part they mesh well with the hip hop-flavored tracks. Overall “Still Dreaming VI” is a relaxing and enjoyable listen of quality music all the way through and while some is familiar it all sounds good blended together.