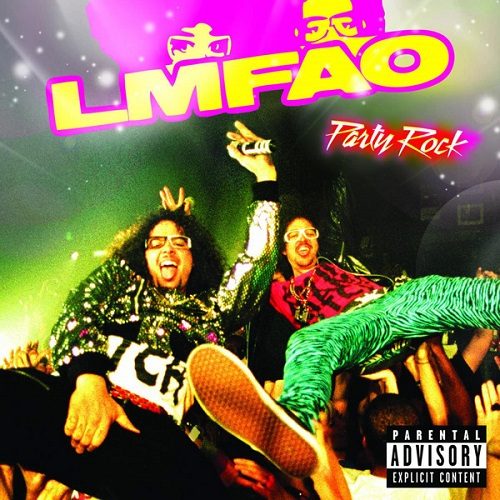 I’ll be the first to admit I didn’t take LMFAO seriously. The name alone gave me reason to think they were not a serious group, and the fact they are the son and grandson of Motown founder Berry Gordy led me to believe their album was a vanity project that got released because of nepotism. In the real world though pretending things you think aren’t important will eventually go away doesn’t work, so I made a huge mistake in underestimating how popular LMFAO would become. Their first single “I’m in Miami Bitch” became a global phenomenon, with so many revisions and guest star remixes that listing them all would be longer than this entire review. On further reflection it’s not hard to see why. Redfoo (the elder of the two) produced a simple and unencumbered bassline with a few electronic notes sprinkled over it, and the kick/snare tempo makes it easy to dance to. Combine that with a chorus people love saying out loud when they’re drunk because it feels a little bit naughty and rebellious, and you’ve got a sure fire winner on your hands.

LMFAO may have had connections and nepotism on their side, but a hit’s a hit’s a hit no matter who makes it or why. The challenge for LMFAO’s tag team duo of Redfoo and SkyBlu was to not become a Tag Team duo i.e. a one hit wonder with a pop song remembered decades later for being their only success. They quickly capitalized on the success of “I’m in Miami Bitch” with the full length album “Party Rock,” but not surprisingly chose to stick to the formula that made them a success in the first place. Depending on which version of the LP you get, “Party Rock” is a 14-15 song long album that hinges on three things – booze and a pair of tits. I suppose technically you could call that TWO things but they spend so much of the album talking about uncovering breasts that I went the extra length they did and considered each boob important in its own right. Is it juvenile? Absolutely, and it works for them. It works so well that “Get Crazy” became the theme song of popular MTV reality show “Jersey Shore”:

If there’s such a thing as being profound by virtue of a complete lack of being profound, LMFAO have achieved it. Like true hedonists they revel in their complete lack of concern for the pressing social issues of the day and live life like it’s one non-stop party of sex, drugs and alcohol. Actually the drugs aren’t a big part of their lifestyle save for a little weed, but the alcohol definitely is. Another of their huge crossover hits is the up-tempo, heavy hitting, electronic synth binge anthem “Shots.” The behavior that this song advocates is what every high school student looks forward to about college and every parent fears about it. It’s possible this song would have been a success with or without Lil Jon, but his cameo appearance takes an otherwise wantonly excessive song so far over the top that even if you disapprove of the lifestyle you can’t help but enjoy the exuberance:

On some level one begins to suspect that LMFAO is in on their own joke as opposed to being the butt of it, especially when a song like “Lil Hipster Girl” goes out of its way to rock samples from the hip-hop classic “Here We Go (Live at the Funhouse)” by Run-D.M.C. By virtue of being Berry Gordy’s progeny through the generations, they’d probably have some degree of genetic imprint for musical appreciation, but that’s tempered to some degree by the fact they are riding a wave as opposed to cutting the edge. “La La La” could easily be mistaken for a Black Eyed Peas song, and one can argue whether or not it’s a coincidence that they are signed at least in part to will.i.am’s vanity label. “What Happens at the Party” has a delivery not unlike many recent Southern rap hits, be they from Gucci Mane or Waka Flocka Flame. “Leaving U 4 the Groove” is yet another style bit, this time borrowing heavily from Pharrell Williams. Even their signature electronic sound ultimately reminds one for better and for worse of Ke$ha on tracks like “I Shake I Move” and “I Am Not a Whore,” though the latter is certainly amusing in its ernest confessions:

“Most girls I meet are quite savage
Always tryin to grab up on my package
They say I look yummy and they want a taste
But I’m a human, not a sandwich
Sometimes I feel like LL Cool J
I make love, not random booty
But every girl I try to get to know
Ends up tryin to do me, I said
I, am not, a whore
I, am not, a whore
But I like to do it”

How much you’ll enjoy LMFAO’s “Party Rock” depends to a great degree on how much of a sense of humor you have and to what level you think they are just goofing around and having a good time. If you tried to model any part of your life on the way they act here you’d be dead, in a hospital, slapped with a harassment lawsuit or any combination of the three in no time flat. It’s not like theirs is the first album containing rap lyrics to be far fetched though, as the rate of bullets flying through some gangster LP’s would make even the most war torn ghetto look like a walk in the park. For argument’s sake let’s assume LMFAO purposefully made the most over-the-top hedonistic music they could for their own amusement, and that by hook or crook they lucked into the public enjoying it too. On that level “Party Rock” might not be anything you’d want to act like, but you can live vicariously through the absurdly lascivious behavior of the protagonists and enjoy their flippant lifestyle. Where a lack of rhymes fail them, the hip-rock-electronica music carries them forward into music that’s passable even when it’s not profound. So long as you get it, LMFAO may not change the world, but it’s a fun way to kill time. Just don’t drink like they do or you’ll kill brain cells too.