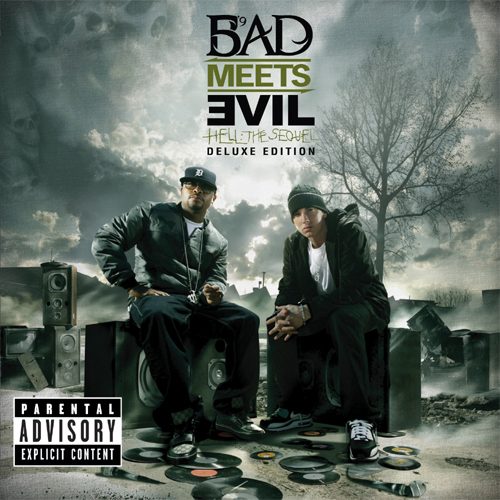 It’s been a long time coming, but Eminem and Royce da 5’9″ have finally done it. “Hell: The Sequel” is an EP – and for good reason, too, as we’ll see later – as opposed to an official album (even if the Deluxe Version has eleven tracks and clocks in at three quarters of an hour). After so long, however, most fans will just be glad to have anything from the duo that genuinely terrorised the hip hop landscape over thirteen years ago. A lot of water has passed under the bridge since then, and it would be unrealistic to expect exactly the same visceral thrill that BME used to provide on tracks like “Nuttin’ To Do” and “Scary Movies” – or even the original version of “Renegades” that Jay-Z hijacked for his “Blueprint” album. I mean hell, when these guys were spitting in a PHONECALL to a radio station for five minutes, it is still more attention-grabbing than most of the free hour-long mixtapes released nowadays.

But that was then, and this is now. Eminem is no longer the force of nature rapper that emerged on the scene. He’s older, wiser and sober. Yes, that flow isn’t quite as incisive and, of course, he’s developed that unnecessary habit of screaming his verses, but he can still deliver flows, lyrics and well-written songs. If that seems like a dampening of expectations, then don’t worry – for while Em may have changed a touch for the worse, please recognize that Royce da 5’9″ is even better than his ’99 counterpart. Over the last couple of years in particular, he’s been on fire and totally found his comfort zone: brilliant lyrics, the brashest flow in the game, devastating punchlines and the ability to dominate break loops. He brings all of that, plus more, to “Hell: The Sequel” and at times, it’s utterly thrilling. Let’s be clear from the off – this isn’t a mass market Eminem album with Royce playing hype-man: it certainly won’t sell like “Recovery” because that’s not the aim in the slightest. This is a few tracks of two old friends HAVING FUN, egging each other on lyrically and, for the most part, it works well. That’s why any misgivings about concepts/sequencing or the lack of cohesiveness should be left at the door. This EP is all about lyrics, punchlines, flows and playing off each other. You know, all that good old-fashioned stuff.

The first time you listen, it’s probably not going to be all that impressive: there are some “solid” beats with some “decent” choruses, but those are extracurricular subjects. But spin it a few times and adjust your vision accordingly. Focus on the interplay between Em and Royce, which kicks off in style with the Havoc-laced “Welcome 2 Hell”; bump the single “Fast Lane,” which has absolutely nothing to do with anything, it’s just two rappers trying to impress on wax with wittily shocking lyrics; follow that up with possibly the best song on the EP, “The Reunion,” where Royce’s verse is so unbelievably hot, the last couplet has already become a favourite retweet on Twitter. There are a couple of tracks that sound like out-takes from “Recovery” sessions – most specifically “Above the Law” and “Take From Me” – but that’s not a criticism, merely an observation, with the former probably sounding a better fit here. It leads into the superb Mike Epps sample on “I’m On Everything” – ok, we know in real life that Marshall is sober now, but Evil isn’t, and if anything it’s good to know that Mathers has put enough distance between himself and addiction to take the piss out of himself.

One distinct advantage to Slim Shady’s career having been such a closed shop musically – with only Dr Dre and a couple of others really being allowed to supply him with beats until “Recovery” – is that since his last album, it’s been so utterly refreshing to hear him spit over beats by any other producer. Recently, Just Blaze brought the heat, Alex Da Kid laced his hits, and Em sounds so boosted and re-energized. Bangladesh is up next, and the “A Milli” producer provides the score for the controversial “A Kiss” â€“ which takes shots at Lady Gaga, amongst others. It’s all blink-and-you’ll-miss-it meaningless wordplay, however, so should be taken with a liberal pinch of salt. The eerie beat fits well, and it’s actually a slight departure for Bangladesh from his usual 808 bass heat, though it does bizarrely lead into the completely out of place “Lighters” featuring Bruno Mars. It’s not a bad song – a cheesy but soaring chorus, emotional confessionals from both rappers in the uniquely Shady way – but it comes in so randomly that the sequencing leaves a lot to be desired. The aforementioned “Take From Me” has a very “Space Bound” feel to it, and although it’s perfectly alright, it’s not particularly gripping. Finally, the Slaughterhouse feature “Loud Noises” is fine, but it recalls why their first album had the feel at times of a bunch of spotty thirteen year olds, camping in their parents’ back garden and measuring their penis length by torchlight. The Deluxe Version contains the excellent (but ironically titled) “Living Proof”- which kicked off the collaboration in the first place – and the subtly impressive “Echo.” It’s a great way to end the proceedings, and many listeners will probably sub them in as replacements where necessary.

Cards on the table time. It’s become a real thing to constantly bitch about the state of hip hop, and how it’s nowhere near as good as it used to be, with lyrics relegated to the bottom of an A&R’s list of priorities. Can we not just finally admit that that viewpoint can now be considered lazy? Good music and great lyrics are still around in abundance – you just have to LOOK for them a bit harder. Fortunately for you, every now and then, a couple of artists decide to get together and release something hot, a pet project that still has enough commercial appeal to get a bit of traction. Last year, you had Nas & Damien Marley gifting you “Distant Relatives” and within the next few months (or maybe sooner), you should even be receiving “Watch the Throne” from Kanye West and Jay-Z. Today, “Hell: The Sequel” proves to be an extremely welcome addition. It is, most definitely, not an album: there is a slight lack of cohesion, the artists don’t particularly stretch themselves conceptually and the music certainly doesn’t compare to the past classics that either MC has dropped before. However, the whole point was to get Eminem and Royce back in the booth, and to spit fire. Whilst it’s a shame that we will never again see that ’99 flow from Shady (going over BPM’s from 90 to 105) with him now insisting on the double/triple time verses (plus screaming) a bit too much, he is still at least on point. As for his partner in crime, Royce is excellent, and to many, far preferable over his younger self. He’s grown into a confident, dominating rapper who can pretty much do it all. I’m willing to bet that if you asked almost any MC in the world at what point they were happiest, it would probably be those first few years: when there was no deal, no pressure and the most important thing was to improve, have fun and impress your peers. That era is perhaps what Eminem and Royce da 5’9″ represent to one another, and probably what they’ve attempted to recapture on “Hell: The Sequel” – and if those were the terms, then job done.