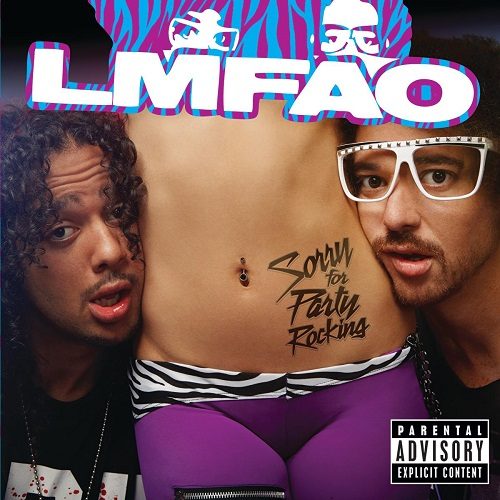 About a month ago I decided to backtrack and get caught up on LMFAO’s debut album “Party Rock.” It’s safe to say that I discovered that Redfoo and SkyBlu were not lyrical giants, but there was a relatively harmless and carefree attitude to the album that when paired with good production made their music listenable. Their content, while admittedly vapid, was at least unapologetically so. If you’re going to make an album with nothing better to say than how many shots of Patron you can drink without puking, and how many women you can sleep with and not catch a venereal disease, then you might as well go the full length and not half-ass it. I can give LMFAO the credit they deserve for taking what could have been a one hit wonder song like “I’m in Miami Bitch” and actually developing a following and a slew of hits for the club (and the after party).

For that reason I’m also not surprised that they came back with a new album for the summer of 2011 called “Sorry For Party Rocking.” Much like when they first debuted, their first single “Party Rock Anthem” came out well in advance of a full length, and much like “I’m in Miami Bitch” it’s an infectious albeit misogynistic ode to having a good time. The biggest difference is that while “Miami Bitch” made use of a simple bean and a memorable hook, the lead single modifies their party aesthetic with the idea of “shufflin” to the beat and features a more layered production with singers and synthesizers. The lyrics are the one place where nothing whatsoever has changed – they’re simplistic and to the point:

“Yo… I’m runnin through these hoes like Drano
I got that devilish flow rock ‘n roll no halo
We Party Rock! Yeah that’s the crew that I’m reppin
On a rise to the top no +Led+ in our +Zepplin+”

“Step up fast
And be the first girl to make me throw this cash
We gettin money, don’t be mad
Now stop, hatin is bad
One mo’ shot for us (another round)
Please fill up my cup (don’t mess around)
We just wanna see (you shake it now)
Now you home with me (you naked now)”

If every song was at the level of “Sorry For Party Rocking” then LMFAO’s second full-length album would be an unqualified success, even with rhymes that are at times a hot mess. Unfortunately there are some songs which are just as hit as miss. “Miami Bitch” may have had a simplistic beat, but it was an danceable one with a hard hitting bassline. “Sexy And I Know It” doesn’t have either – it’s just repetitive and annoying. Thankfully it’s offset by “Champagne Showers” featuring Natalia Kills, which is also the next single off the album. The interesting or maybe ironic thing about “Champagne Showers” is that even for a purposefully over-the-top group their excessive waste of champagne (“it’s about to be a champagne monsoon”) seems like a parody of LMFAO, as though the song was a Lonely Island send-up.

There are a few guest stars here and there, which is a change for the Gordy duo given their biggest (and only) contributor the last time around was Lil Jon. Busta Rhymes shows up for the appropriately fast paced “Take it to the Hole,” Eva Simons and will.i.am are on the ultra-slick “Best Night” (another sure shot single for radio and the dance floor, and sure to heat up clubs in Vegas), and their friend Goonrock makes repeat cameos on songs like the previously mentioned one and “We Came Here to Party,” which has a nice old school 1970’s feel to it were it not for the AutoTuned singing. It’s also got some of the best lyrics I’ve ever heard on a LMFAO song:

“Just cause a guy got a suit and a tie don’t mean he gonna tax ya
Just cause I walk with a limp like an old school pimp don’t mean I’ll slap ya
But if you wanna talk tough and you wanna puff then I might just have ta
But I ain’t come here to clock your mouth (whoa)
I came here to rock the house (hoooo)
Yeah, I get crazy wild; anything for the fans to make ’em smile”

It’s hard to know what to make of these dudes. Redfoo is clearly a good producer when he takes the beats seriously, and is credited as the man or among the men on most songs – exceptions being the Rami Afuni laced “Take it to the Hole,” the guest starring and produced “Reminds Me of You” from Calvin Harris, and GoonRock’s turn behind the boards for the bopping and funky “With You.” Unfortunately on some songs he really seems to phone it in and as a result they’re bad enough to be borderline unlistenable – I never need to hear “Put That A$$ to Work” or “Hot Dog” ever again. If there’s one thing that “Party Rock” had going for it back in 2009 it’s that it was almost consistently playable from start to finish, the music more than making up for a regular lack of depth. When the production becomes substandard the weaknesses of their rap game are more glaring, which is why I believe that even though this album may sell more copies, it’s not as good as their last one.