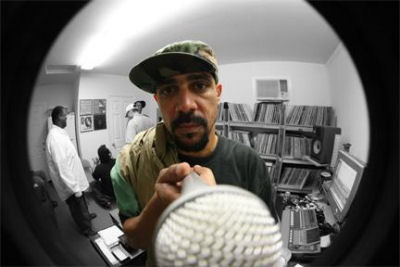 n8 the gr8 (The Cuf) Interview

“From Oakland to Sac Town / the Bay Area and back down.” Every hip-hop fan knows these 2Pac lyrics by heart, but how many know there’s actually been a thriving hip-hop scene in the aforementioned Sac Town since the 80s? Most people only think of LA and the Bay when they think California hip-hop, but when we sat down with n8 the gr8 of the Sacramento rap group The Cuf, which also includes Pete, Crush and Brotha RJ, we received an education in Sacramento hip-hop history. n8 the gr8 also broke down the one very simple thing he needs in order to sell albums, and why after over two decades of making music he only recently just started putting his all into it.

Adam Bernard: Let me start this off by saying condolences in advance for the loss of your basketball team. Being from Connecticut I know what it’s like to lose a sports franchise.

N8 the Gr8: They didn’t leave yet. They’re gonna leave, and they pretty much lost their fans. Some fans are still there. My son’s a humongous Kings fan, so he’s sad.

AB: Overall, how do you think losing the Kings will affect the area?

NG: I live right by the arena, I’m probably five minutes away, and there are all kinds of developments and different stuff that thrives off of the arena, and the Kings in general. In the summertime it’s a little bit different, but in the season… it’ll hurt the economy. It definitely will.

AB: Moving to a team that ISN’T leaving Sacramento, let’s talk about your group, The Cuf

. Hit me with some deep history. I know you all met in 1993, but how did you end up coming together and what were you doing before then?

NG: Me and Crush, I’ve known Crush since I was in junior high, we used to beatbox together, rap together. Another one of our friends, Mike Russell, he’s kind of the guy who taught me how to rap. Us three used to hang out in high school. We would just play around, we didn’t really take it seriously. I think we paid for some studio time when I was 18. That was one of the first real beats I made. The Cuf came together in ’93. I think Pete was out in the Colorado Hills with a guy named Fat Jay, they had a group called Stone Age. Brotha RJ was kind of the most known in Sacramento because he dealt with, I think they were called the Head Nod Squad, that was like Funky Socialistics, they had a deal with Priority back in the day. It was one of the first things to ever happen to Sacramento. RJ actually had a group with Brotha Lynch (Hung) when they were in high school, too, so RJ was known in the scene a lot more than we were.

AB: We know about The Bay and we know about LA, but is there a decent hip-hop scene in Sac Town… and am I allowed to call it Sac Town?

NG: Oh yeah, definitely. {*laughs*} There’s definitely a scene out here and it’s thriving right now. We have quite a few people trying to make a run towards some real exposure, which is awesome. Back then, as far as the mid 80s to 90s, I would say there was a humongous scene. There was Gift of Gab, who I went to high school with, there was RJ, there was Kevin Mann, which is Brotha Lynch, and then there was Shawn Thomas, which is C-Bo. Those were the four main emcees and they would battle every Friday. All those people ended up doing things.

AB: How many albums deep are you? The distro sheet says your latest, Cuf Caviar Vol. 1, is your fourth, but then lists five previous albums.

NG: Well, as far as The Cuf, I think… we put out cassettes, we probably put out four or five cassettes before we ever put out a CD, and then we put out some vinyl, too, that never came out on CD, so altogether I think we have 13 or 14 different projects that we’ve put out. We’ve done all kinds of stuff, and then on top of that we had Deep Fried Funk Brothers, which was me, Pete and Mad G, our ex-DJ. We got a new DJ, Riff Raff, and he’s a beast.

AB: Why was there a ten year wait in-between Cufdaddy and Caviar Vol. 1

NG: You know, it’s weird, it wasn’t like a wait, we just kept going. We always practiced once a week. We had a set practice day. We kind of aren’t doing it right now, but we had it for years and years and it was our way of making sure we got together and kept with the music. Crush went to Costa Rica for three years. RJ moved to Atlanta. Everyone else was moving around trying to figure out life, but we were still making music. If you listen to the Deep Friend Funk Brothers albums, and Pete had a couple solo albums, we’re all still on em, so it wasn’t like we stopped, we just hadn’t done anything as The Cuf in that long because we weren’t all in the same place at the same time.

AB: Had there been Skype back in the day…

NG: {*laughs*} Yeah, for sure. Skype and everything else. We were on the road a couple weeks ago and I just had a flashback on when none of us had a cell phone, when there was no GPS, when you would get lost and drive two and a half hours out of your way. There are so many differences now, even the internet, Facebook and Twitter, man if we would have had that back then who knows where we would be right now.

AB: I notice on your bandcamp page you had a special offer that included a signed physical copy, amongst other things. That offer was limited to 100 and has already sold out. How quickly did it sell out, and what led you to come up with that idea?

NG: That sold out pretty fast. I think it was within two weeks. That was something the label came up with, they wanted to put a little something special on it to try to get some pre-orders.

AB: With album sales being at an all-time low, what other methods of innovation are you working on to get your music out there?

NG: The difference between where we’re at and the rest of the industry is, I guess it’s hurt us a little bit, but I still can sell CDs, I just have to be able to do shows. If I can get on stage in front of 200-300 people I will sell 10-15 CDs that night. So it’s really more of trying to book more shows and have a little bit more visible presence online. We have a couple videos we’re working on right now. That’s something we’ve never done as The Cuf before. We did a Deep Friend Funk Brothers

video, but as The Cuf we’d never done a video. Our first video we shot about two and a half weeks ago and it’s really cool. We start it from a picture that we took in 1993 where we’re sitting at the Crocker Art Museum, it’s one of our little Sacramento monuments, and we’re sitting on the steps. We went back to the same place and took a picture of us now, shot the whole video from there, and we’re going to tie it in with a bunch of old footage. We’ve traveled and done so many shows over the years, we’re just gonna bring em back and show em if they don’t know why they would want to know. That video is for “Keep the Flame Lit.”

AB: Is it weird to you that after 18 years of being a group the is your first Cuf video?

NG: Yeah, it was kind of weird. That’s another one of those things. It wasn’t easy to do a video back then. It cost so much money it just wasn’t an option. Now, shoot, you can get a good camera for $500 and shoot it yourself if you really want to.

AB: Is there any part of you that’s still waiting for a big break, or are you really happy with what you’ve accomplished?

NG: You know what, to be honest, I’m actually working with a singer, her name is Maryann, I’m working with a male singer named J.Kendall, I’m working with a couple other artists, I’m actually trying to make it somewhere else. I’ve really been pushing my production lately, trying to become more of a producer and not just making beats and rappin, I’m making songs. I don’t even really sell beats anymore because as I make music I try to fit someone from my team into the song and figure out what essence the song is supposed to capture as opposed to just makin stuff.

AB: It doesn’t really help the resume when a wack rapper buys your beats.

NG: True. It really doesn’t. Even that, it doesn’t help your resume if you sold a beat that could have done something else and you sold it to someone and they never even put it out. That happens all the time.

AB: And you’re still working on The Cuf?

NG: We’re working on Cuf Caviar 2. We’re trying to shoot this documentary because, like I say, when we started going through this old footage we have so much old stuff and there are so many friends, like Planet Asia and Rasco, there are so many random other people from our careers and friends that we’ve dealt with and times that you kind of forget about, so we’re thinking with that kind of push, too, it will help The Cuf to get a little bit more exposure and our music is only getting better, so I don’t think that will ever be a problem.

AB: Is there anything else you’d like to add about you, your music, or The Cuf?

N: My son, Takticz, he’s getting ready to graduate high school here in a couple weeks and he’s working on a project. He is amazing. And then The In Crowd, that’s what I’ve been working on, also. We have a bunch of stuff that’s getting ready to drop in a row. We have Maryann, Jay Kindle, the Lost Tribe, which is Justluv and Agustus thElefant, we got Talib Kweli on that, Casual, Grouch, Gift of Gab, we kind of pulled out our little bit of clout that we have to try to pull in some more features to try to help my guys from Lost Tribe. They did ten or eleven songs on the Afro Samurai video game soundtrack. Then me and Mayhem have a group called The Klear Channelz that we’re working on right now. It’s kind of a concept project. I’m pushing more now then I ever have and I’m just focused on getting better and better.

AB: Is there a reason that now is when the focus has been found and you’re pushing 10,000%?