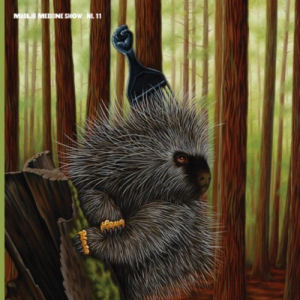 Madlib’s Medicine Show was producer/rapper/musician/crate-digger/pot aficionado Otis Jackson, Jr.’s attempt to release an album a month in 2010. Odd numbered editions were collections of original work, while even numbered editions were mixtapes from Madlib’s four-ton vinyl collection, exploring jazz, Brazilian music, reggae, soul, and psychedelia. (I don’t know what is more impressive: the fact that Madlib has four tons of vinyl, or the fact that all of that music could fit on about five pounds of hard drive space.) With the final installment of the Medicine Show project being released this month, some summarizing observations can be made:

Volume 11 speaks to all three points. It is creative, it feels tossed off, and it is not unlike the comps that Ivan puts together over at Hip Hop Is Read. The difference is that Ivan’s collections of odds, ends, and rarities are available for free. Madlib is charging you $13.99 for the honors (or $9.99 for MP3s, and a whopping $19.99 for the vinyl). I’m not begrudging an artist for wanting to get paid for his art, but it has to be said that the only reason why Stones Throw is getting away charging premium prices for this stuff is because Madlib is Madlib, and has a ample list of dedicated fans/suckers (myself included) who are willing to shell out their hard earned cheddar for his musical musings.

Does “Low Budget High Fi” suck? No. It’s Madlib, and even his toss-offs are better than a lot of artists Grade A material. There is some great stuff here. It contains a variety of collaborations, instrumentals, and even a track from the Jaylib sessions. It’s worth picking up for the tracks by A.G. spitting some hardcore East Coast realness, Madlib nailing his blunted flow, Guilty Simpson waxing poetic about a woman who wronged him, Strong Arm Steady’s “Charlie Hustle,” and Madlib’s many instrumentals. I was less impressed with the tracks by the Professionals, and the general noodling and stream-of-consciousness vibe of the disc. Many of the tracks are less than two minutes long, and there is often thirty seconds of skits and random weirdness at the top of a track. The result is an album whose high points are held back by a lack of cohesion.

Is this album worth the sticker price? Well, there is a reason why Stones Throw did a gimmicky vinyl release, complete with hand silk screened covers using Hennessy -infused ink. The music contained inside the flashy packaging doesn’t really warrant the price tag. It’s basically odds and ends left over from various projects Madlib has worked on, with equal amounts of interesting and unremarkable material.

I’m a Madlib fan. I bought five of the eleven Medicine Show albums, and out of respect to both Madlib and Stones Throw, I’ve refrained from illegally downloading the other six. I’m probably going to pick up the final installment, a collaboration with rapper Frank Nitty. Still. this album, and the whole Medicine Show series, is if not a let down then at least too much of a good thing. It mainly proved that Madlib has beats and records for days, but even someone as prolific as Otis Jackson Jr. himself can’t deliver twelve quality albums in a year. I’d settle for one great album a year versus twelve ok albums. Madlib has been pretty silent in 2011, so maybe he agrees.