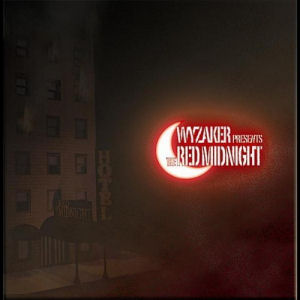 A long time ago in a galaxy far away called the 1970’s, “Hotel California” was a hit rock single that that crossed over from the world of music and like the song itself became a metaphor for something bigger. The Eagles drew their inspiration for the lyrics from the corruption and greed of the music industry, describing their stay in the allegorical hotel as a “lovely place” that “you can never leave,” essentially a fantasy that turns into a nightmare. Though he’s far removed by both age and geography from the L.A. rock scene that gave birth to the Eagles, Wyzake has similar intentions on “The Red Midnight.” The title at first seems to reference a surreal atmospheric phenomena like the orange tinted harvest moon, but in actuality it is a hotel “located on the corner of 3rd Ave and Sticky Street East, in the core of the city of fire.” (The lower case spelling of the city’s name being the artist’s preference.) Who would go there, and who’d willingly stay in such a hellish place? “Popsickill the Dizzy Kid” would:

Even in the introductions to songs, a sense of sick and twisted reality pervades. “Officer Murphy” opens with samples from the TV movie “Desperation,” itself based on a horror story by Stephen King. A police officer played by Ron Perlman calmly and matter of factly reads a couple their “rights” while throwing in an unexpected random tidbit: “You have the right to remain silent. If you choose to not be silent, everything you say can be held against you in a court of law. You have the right to an attorney. I am going to kill you. If you cannot afford an attorney, one will be provided for you.” The line and the actor’s delivery of it combine for one creepy sample, and given this is only the second song of “The Red Midnight,” it really sets the tone for what’s to come.

It’s fair to say that there is nothing much lovely about the place called “Red Midnight” and much like the unfortunate travelers who arrive in the town of Desperation, people are being dragged there against their will. The rooms are populated by a circus cast of freaks and rejects: “Boris the Spider,” “Good Ol’ Ray,” “Buzz the Bullethead” and “Jack O. Lantern” among others. The latter track is pretty typical of Wyzaker’s album both in creation and presentation, as the liner notes describe it as “produced, written and performed by Wyzaker.” This makes the song exactly what he wanted it to be, which is exactly what it is – dark, brooding, electronic, with gravelly vocals delivered at a level barely audible above the noisy backdrop. I suppose this is what his label means when they refer to Wyzaker as “innovative” and “slightly industrial.”

There is a method to Wyzaker’s madness, even if it’s occasionally hard to find on a challenging 21 track album that clocks in at over an hour long. The biblical battle depicted in “Gabriel vs. Damien” featuring Sirkuss is definitely intriguing, and the guest production by Mantrakid makes the lyrics a little more discernible to the ear. There’s some surprising beauty to be found in the short instrumental “Broken Elevator Muzak,” showing Wyzaker is not just grim and gruesome because he doesn’t know how to make something pleasant. Every part of “The Red Midnight” can be understood as an artistic choice made by an intelligent mind as part of an overall theme, so to criticize what Wyzaker is doing one must at least recognize “The Red Midnight” is actually typical of art that explores the dark side of humanity. It’s not enough to simply call it unenjoyable, because it’s meant to challenge you as much or more than it is to please you. Some great art is meant to make you think, not to make you smile. Unfortunately for Wyzaker “The Red Midnight” is not part of a museum showcase, a cinematic arthouse exhibition, or a college lecture slide show presentation.

I’ve always appreciated that the beauty of art is that it’s not always beautiful, and there’s no doubt Wyzaker has made an artistic statement that is FAR from beautiful. One could perhaps even argue that it is beautiful in just how ugly it is. One could also argue that it’s incredibly hard to listen to from start to finish without taking several breaks, which is not endemic to intentionally macabre rap albums. Gravediggaz for example raised the concept to a high art by combining beautiful beats with disturbing rhymes which you could clearly hear, because the production was precise and meant to entice. The contrast between the two was stimulating and the metaphor of “raising the dead” could be understood as a reference to being MENTALLY dead, not willing to see the world’s truth. Wyzaker may have similar intentions but he’s not the compelling rhymer that any of RZA’s crew were, nor is he producing sonic backdrops as enjoyable. The art is here but the message is being lost in the medium.