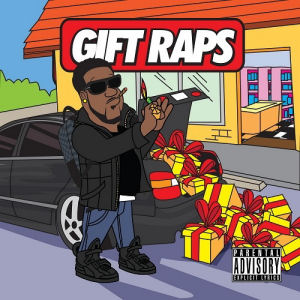 For nearly two decades, the quintessential name in Cleveland hip-hop has been none other than Bone Thugs-N-Harmony. Prior to that, there was MC Brains and his Michael Bivins-produced “Oochie Coochie” and a group called 116 Soljaz that was signed to Def Jam for a minute. There’s still a bubbling underground scene in Cleveland, but nowadays its biggest noisemakers are Kid Cudi, Ray Cash and Chip Tha Ripper. Born Charles Worth, Chip has been on the mixtape scene dating back to 2007. His projects “Money” and “Can’t Stop Me” were well received and he even appeared on Cudi’s “A Kid Named Cudi” mixtape. By the time 2009 rolled around, Chip had been featured on “Hyyerr” from Cudi’s “Man on the Moon: The End of Day” album and his mixtape “The Cleveland Show,” while somewhat bloated, had become a major hit for him. In the time since then, he’s collaborated with the likes of Pac Div, Big Sean, Freddie Gibbs, Kidz in the Hall and The Cool Kids. Chip announced that he would be recording his latest release, “Gift Raps” with production primarily from Chuck Inglish of The Cool Kids and the project became available for download this past March.

Fittingly, “Gift Raps” kicks off with “The Entrance” and advises anyone who might even think of getting in his way to make room. The inevitable Bone Thugs influence can be heard in the stutter step flow that Chip switches to from time to time on the project. As one might expect with a title like “Light One Up,” the track is an ode of sorts to the sticky green. “U.A.F.” stands for Ugly As Fuck and insists that anyone that’s not enjoying the evening or has any complaints has to be either broke or just ugly as…well, you know. “The Big Bang” is Chip’s outlook on a world that “compares God to Santa Claus” and allows people to die from the effects of alcohol, but locks people up marijuana. On “Everyday Chillin,” Chip reflects on how he used to beat on the table and even gets a little motivational, beckoning the listener to reach for the sky before getting braggadocios with his rhymes again. “The Coldest” finds us in the mind of Chip as he attempts to process his thoughts after an attractive woman walks past him. A few notes on what sounds like an organ, open “LIFE” and Chip waxes motivational once more, telling the listener to take advantage of any and all opportunities that they may come across in life. In Cleveland, DynoMan is a football game where the ball is thrown in the air and whoever comes down with it is on their own as they try to score a touchdown while everyone else is trying to tackle and bring them down. Essentially it’s every man for himself and Chip applies that logic to the song of the same name. One of the standout tracks on the project is the upbeat “Jumanji,” which touches on how wild the city streets can be at times, as Chip raps:

“These niggas is some bitches, that’s just how I feel
You say you’re cut from a different cloth, well bitch I’m cut from steel
Make a phone call, get you tough niggas killed
Niggas hate on the Net, but I know where they live
Got a big list and some hungry hood niggas
Send ’em to your house while I’m out of town chillin’
Cavs took a L and the Browns ain’t winnin’
The whole city bitter, ain’t nobody grinnin’
On top of that, niggas still gettin’ shot down
Total anarchy ain’t too far-fetched now
The city where the sun always hide behind them clouds
Winter time, ain’t no love in this whole fuckin’ town
Don’t drive too fast on St. Clair, slow down
Get your kids in the house, it’s about to go down”

The synth-heavy “Hang Out” has Chip hoping that he and a certain young lady are on the same page as it pertains to just what hanging out consists of, because you know there’s hanging out and then there’s “hanging out.” Blended Babies provide co-production on “Plural” and on “UnderDogs” Chip voices some of the frustration that can come along with being at the bottom and the joys of rising up through the ranks to the top. Things come to a close with “The Bio” which is a brief recollection of some of Chip’s life experiences that have gotten him to the point where he is now. Overall, the album has an interesting feel to it. “Gift Raps” doesn’t really feel that cohesive to me, almost as if I could listen to it on shuffle and get the same effect as I would listening to it straight through. Perhaps that’s the idea here. On the cover, we see a bunch of boxes individually wrapped up with a bow. So yeah, maybe that’s it…each track is a new present for the listener’s ears. Inglish’s production does well to complement Chip’s flow in most cases, so it doesn’t really matter in which order you open the gifts. These gifts may not be tailored to everyone’s preferences, but they’ll do for now, until the next gift giving season comes up.