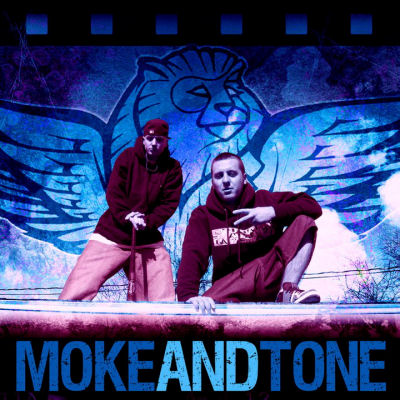 Tone of Moke and Tone Interview

A whole lot of east coast and a little bit of west coast. That’s the recipe for Moke and Tone, the Massachusetts based duo whose backgrounds include a life in MA for Tone and life that began in California and continued in The Bronx for Mokeout. Their 2011 release, Shot Heard Round The World, has garnered them a lot of attention and praise and this week RapReviews caught up with Tone to find out more about the backstory of Moke and Tone and their music. Tone also discussed the pain of perfectionism, the many false idols he sees being worshiped, and why, despite having controversial content, he’s not worried about anyone coming after him.

Adam Bernard: If someone’s mad lazy and only reads the first question and answer of this interview what do you want to make sure they know about Moke and Tone and your music?

AB: You guys haven’t always been a duo. What were you both doing before the Moke and Tone project Shot Heard Round The World?

T: I have been producing, recording and playing shows with my other group, the Problemaddicts, since 2006. We’ve released two LPs and a mixtape. Most of it is posted for free, available to download at www.soundcloud.com/mystika-music. Mokeout has been putting out music with Hard Times Records for a long while now. Definitely check them out!

AB: How did you come together? If it’s really just “the internet” please take the liberty to create a more interesting backstory.

T: Through mutual friends. We heard each other’s music and talked about collaborating for a long time. The first song we recorded was “Shit is a Trip,” which was definitely the jump-off point for Shot Heard.

AB: Not every artist plays well with others, so to speak. What led you each to believe becoming a duo would work?

T: It’s not about being a duo, it’s about making good music with artists you respect. That being said, I definitely feel Moke and myself have a unique chemistry when it comes to songwriting. We’ve produced material together that neither of us would’ve created on our own.

AB: Let’s talk about Shot Heard Round The World. Did you name your album this because one of you is a direct descendant of Bobby Thompson?

T: I’m horrible with naming shit. Case in point – the last Problemaddicts mixtape, Burn This Shit. Moke came to me with the idea of Shot Heard Round the World and its many underlying implications. What are they? Google it and figure it out. We originally played on a baseball theme for the album, but sort of abandoned that concept in favor of a more broad one. More than a reference to any one thing, a Shot Heard Round the World is a specific, important event with repercussions. That’s why we chose the title.

AB: How does Shot Heard Round The World differ from your previous projects?

T: For me, it was definitely more of a “street album” than any of the Problemaddicts records. I was less focused on tongue twister, simile and metaphor, rhyme scheme raps, and more focused on content. This album is more about what’s being said than how it’s being said, especially relative to my past work.

AB: Did you learn anything about yourself through the recording and completion of Shot Heard Round The World?

T: Garrett, another key member of Team Genius besides myself, shared a quote with me the other day, something to the effect of “the mix is never finished, it just gets abandoned.” There comes a point where you have to let go of perfectionism and start putting songs out. Left to my own devices, I’d probably never release anything, but since I’ve learned that lesson, this should be a big year for me. I have a lot of stuff I’ve been getting ready for release.

AB: Speaking of things you’ve been releasing, talk to me about the “False Flags” video. What are you hoping to accomplish, or get across, with that song and that clip?

T: That song is meant to spread truth. Since some people who reviewed Shot Heard seemed to miss the point, let me clarify that I’m playing a CHARACTER in that verse. Quoting me out of context and calling me a Nonphixion wannabe just makes you look like a hater. Did I fuck your girlfriend after playing a show in some random town? Okayplayer gave us a 90, so you win some, you lose some. I’m sorry, I got off track. What are we talking about? Oh yeah, that the U.S. Government orchestrated the events of 9/11. That’s basically the point, at least for my verse.

AB: The phrase “False Flags” is quite strong and potentially controversial. Are you worried some long lost relative of Betsy Ross is gonna come for that ass?

T: I’d rather share my interpretation of the truth than walk on eggshells trying not to offend people. Someone’s always going to be offended, I try not to let that limit my creativity. Besides, if I got shot for my political views that would just legitimize my work as an artist and make me a martyr. The CIA probably knows that.

AB: What do you feel are some of the other false idols out there that are being worshipped on a daily basis?

AB: Finally, because I want to end things on a lighter note, tell me the most embarrassing album in your collection.

T: I know I have a good three albums worth of pre-Problemaddicts material that’s embarrassing for me. Anyways, Adam, thank you, and good looking on the interview! We definitely appreciate the support! Thank you rapreviews.com and anybody who made it to the end, especially if you’re one of those lazy rap fans.