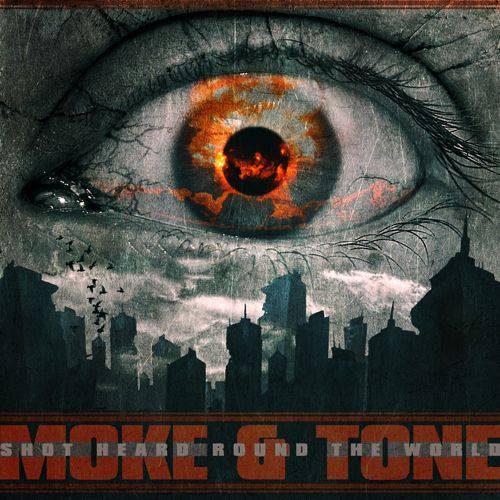 Last month, Minnesota congresswoman and presidential hopeful Michele Bachmann embarrassed herself during an appearance in Concord, New Hampshire, telling a crowd how proud she was to address a congregation in the state where “the shot heard ’round the world” was fired in Lexington and Concord. As any graduate of third grade knows, the Concord she was referring to in fact lies in Massachusetts and not New Hampshire, a fact unlikely to be forgotten by Moke & Tone. I’m not sure if their stage name is an unfortunate coincidence or an ill-advised reference to the Trackmasters’ alias Poke & Tone, but Tone, a member of the Problemaddicts, calls the Commonwealth home, while partner-in-rhyme Machete Mokeout is listed as Cali-born and Bronx-bred. Whip out the liner notes of “Shot Heard Round the World” and you’ll see a pair of scowling, hoodie-clad white fellas toting Louisville Sluggers, which provides a pretty good indication of what lies within. Theirs is of the gritty East Coast school of rap, and a number of the songs on their debut recall Ill Bill and his ilk with references to government conspiracy and futuristic scenes befitting of a sci-fi film. “Shit Is a Trip” proclaims the apocalypse Non Phixion-style, and “Shining” and “False Flag” follow in suit.

“Here we are, just another spectator
Rescue workers runnin’ inside the buildings with respirators
I wonder if they know the threat’s greater
When I make the call, they trigger the charge set to my detonator
Firefighters dashin’, emergency lights are flashin’
I like the ashes, it’s like a snow globe inside Manhattan
You’re probably watchin’ Fox broadcast the flights crashin’
I be watchin’ put options and stock prices crashin'”

“Emergency Broadcast” and “Destiny” continue the Armageddon theme, painting a future where each MC has “seven million siblings.” The most noteworthy track is the Illmind-produced posse cut “Respect” featuring 1ne Man Sound, Black Buddha, Crooked I, and Mr. Metaphor, not because it’s particularly different from the rest of the material but because Illmind and Crooked lend a level of quality unusual for the LP. The production throughout “Shot Heard Round the World,” handled mostly by Team Genius, is acceptable but faceless, sonically decent but sorely lacking any trace of soul. “Pitch Black” and “This Thing of Ours” use too-obvious samples, the latter based on the Rolling Stones’ “Paint It Black,” and a few tracks feature extensive breaks with DJ cuts. The only time the tempo breaks the gloom-and-doom boom-bap is on “The Dark and the Light,” a comparably sunny and upbeat track that while unexpected provides a welcome respite. “My Life” is the late standout, anchored by a smooth, sobering chorus and the duo’s most introspective rhymes on the LP.

Most of “Shot Heard Round the World” works at face value but altogether comprises a forgettable listen that lacks direction. It’s never terrible but only rarely exceeds ordinary, too frequently lacking energy and inspiration. Moke & Tone are capable enough but neither has a discernable identity, and their debut LP only serves to cast them as Non Phixion wannabes.