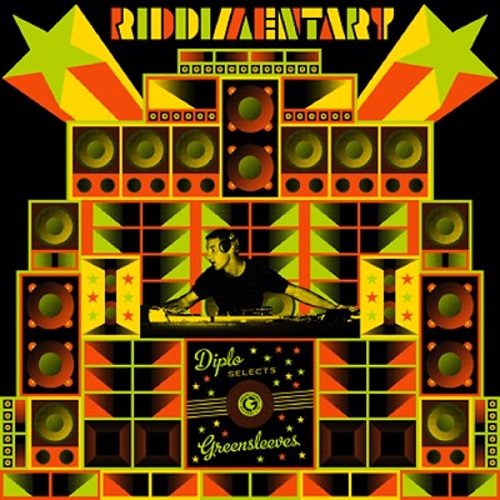 Thomas Wesley Pentz, better known by his stage name Diplo, is an unlikely champion of reggae and dancehall. The Philly-based DJ and producer first gained  notoriety for his personal and artistic collaborations with M.I.A., and then blew everyone’s expectations by introducing dancehall to a wide audience with his partner Switch as Major Lazer.  A skinny white kid from Philly isn’t the most obvious person to make dancehall that would get both Jamaicans and American hipsters ratcheting their partners, but that’s exactly what he did.

In between recording the new Major Lazer album, Diplo took time to release this mix CD featuring tracks from British reggae label Greensleeve’s early 80s output. The label initially wanted him to do a more contemporary mix, but Diplo chose to highlight the music that turned him on to a reggae when he was growing up. The result is a mix that highlights some of the classics of the era.

The album contains a mix of dub, dancehall, roots reggae, and lovers rock. It starts off with Alpha and Omega’s trippy  “Who is the Ruler,” a mellow digital dub songs that starts things off slowly. John Holt’s roots comeback “Police in Helicopter” is represented, as is Gregor Isaac’s 1982 lovers rock smash “Night Nurse.”  “Police in Helicopter” is an impassioned indictment of the Jamaican government’s war on marijuana, and proof that reggae didn’t lose it’s consciousness as the roots-heavy seventies rolled into the digital eighties.

The biggest revelation for me was Eek-A-Mouse’s “Anarexol.” It was my first encounter with this very popular artist. He used to play my hometown of Santa Cruz, California regularly when I was growing up, but I had never actually listened to him. His high voice and bingety-boingety delivery make him one of the most unique dancehall artists out there. Other dancehall tracks include Ranking Dread’s “Fattie Boom Boom,” Lone Ranger’s “Gunshot Mek Daughter Drop,” and Tristan Plama’s “Joker Smoker.”

While the cuts are solid (with the exception of the saccharine “Telephone Love”), I was somewhat disappointed by this collection. It proved to me that reggae lost a lot of its soul as the production values changed during the eighties. I’m an avid fan of seventies reggae, which has a much deeper, warmer feel. The music on this collection sounds colder and less interesting. Joe Gibbs dub of the Abyssinians’ classic “Satta Amassa Gana” here is a good example. It’s a decent dub of reggae’s unofficial national anthem, but lacks the warmth of the dub Gibbs did fifteen years earlier on “Dub Serial.” There is a parallel to American R&B: both genres got slicker and more electronic post 1979, and as a result I stopped following them.

In the end, “Riddimentary” is a good collection of 80s reggae hits, although the music lacks the depth of 70s reggae and the excitement of more contemporary dancehall and ragga. It’s still worth checking out, especially if you want to hear the roots of Major Lazer.