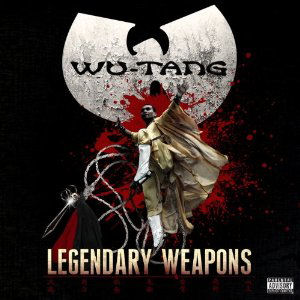 “Legendary Weapons” could properly be called a sequel to the 2009 release of “Chamber Music” for a whole variety of reasons, not the least of which is that this isn’t a Wu-Tang CLAN album per se. That reality comes with the realization that in 2011, this may be as close as we’re going to get to one. The core membership that made the Wu so vital in the early 1990’s is increasingly fractured; they’re more involved with promoting their own albums, movies, and projects from their proteges than they are in hitting the studio as one unified Clan. Now let’s not exaggerate this to a great degree – the core Clan are obviously still friends and routinely make cameo appearances on each other’s albums. With that said the unifying “all for one and one for all” force that kept them all together when they revolutionized New York/East coast hip-hop no longer exists. Nobody’s starving out there on these streets when the Clan doesn’t unite, and beyond their hip-hop bond of brotherhood many now have their own wifey and seeds to provide for, keeping everybody hustling.

In short let’s not cry over spilled milk that you’re not going to hear all of the surviving members of the Wu (obv. sans the late great ODB) together on one track at one time any more. It’s probably time to dead that issue. Instead let’s recognize the times when we can get more than one of the core members on the same song at the same time, accept that as “21st Century Wu” and move forward from there. In that respect “Legendary Weapons” actually gets off to a very strong note by having long time favorites Raekwon the Chef and RZA collaborating on the appropriately titled “Start the Show.” Street Radio provides a rolling slap bass funk straight out of the 1970’s and both drop bars like the days of old, which should also kill any stories of tension between RZA and Rae once and for all:

Raekwon: “Revolutionary gangster, the will to kill
Everything up, my roots is steel
Do a big time march through the desert and shine
Let the seeds live free while we open the minds
of every black man, white man, no color my writing hand
is like dynamite, I fight for land
plus fans yo, gettin money in fact the plan
We travel to Beijing and end up Japan
Hoods everywhere, bring the goods and gear
and teach ’em how to hold mics and grow them beards”

RZA: “They tryin to take us back to Reaganomics with atomic bombs
on Islamic countries to stop them from being Islamic
But Islam is a way of life, Islam is the way of Christ
Islam means peace, the beast must pay a price
for his wickedness, politics is the trickiest
business on this planet, the bandits are the slipperiest
snakes who ever slithered, you ever stop to consider
who’s pulling these strings, from Napoleon to Hitler?
Is there an unseen hand with the unseen plan?
The unclean man from the unclean land”

Opening with martial arts movie samples and leading into more swordplay on the opening of “Laced Cheeba,” the first two tracks certainly have the feeling of a traditional Clan album, and Ghostface’s rap leads the song:

“Fierce, I travel across seas on glaciers
Four shoguns that got fucked by geishas
Still gracious, still able to twist out darts
Just screw tougher skins for swimmin with the sharks
Broken ankle, fuckin with the Wallabee Clarks
Got them bitches still screamin my name! (Whattup Starks?)
I’m a bone crusher, ox’ll split your face like a Dutch Master
No more mixes polar bears from Alaska”

“Yo everybody get paid, everybody get laid
All these bitches dirty, everybody got AIDS
Everybody get played, everybody get sprayed
Everybody do what I say, everybody my maids
P! Crack sellin black felon
Gat clap, rat-ta-tat-tat tap melons
Sun thugs, one gun, one slug
Shot caller, like ‘Yo let me speak to young Bugz’
Listen, it’s Mandela pah
I grab whack emcees, I smack ’em hella hard
I kill niggaz with the birdie blig banga
My Wu-Tang niggaz call me the +36th Chamber+”

Keeping the vibe right and tight, Method Man follows up with the opening verse of “Diesel Fluid,” which features an able performance by Trife Da God (who was also on the previous cut) and a marginal one by Cappadonna (who as always I can take or leave). Some tracks exceed expectations in unexpected ways – Roc Marciano and Killa Sin compliment Ghostface well on the Lil’ Fame produced cut “The Black Diamonds.” Roc has come a long way since his Flipmode Squad days. Speaking of Lil’ Fame, he and Billy Danze both make appearances on the title track, with an AZ rap that’s a throwback to his “Doe or Die” days. It should be noted that Fame and Noah Rubin co-produce a majority of the tracks on this CD, with only RZA’s solo song “Only the Rugged Survive” being done by Rubin alone.

Much like “Chamber Music” this is a relatively short album, clocking in at just over 37 minutes in length. Furthermore out of 14 tracks in total, 4 are just interludes or filler with no bars being spit by anyone, although the percentage of unnecessary filler was significantly higher on the previous release. If you’ll pardon the unscientific word for it, there’s more of a feeling of “Wu-ness” to this release. Hearing Inspectah Deck and U-God together on the somber and deliberately paced “Never Feel This Pain” may not be every head’s dream, but U-God’s deep voice and staccato bars are well suited to compliment the thoughtful and fluid verse of Rebel INS, and Tre Williams holds it together by singing the hook.

Even at times where it seems like a song might be watered down by lesser Wu affiliates, you find that on a track like “225 Rounds” that Bronze Nazareth adds the right note to the intensity of the funk – even Cappadonna shines on this one. Other than the interludes the only track I could really do without is Killa Sin’s “Drunk Tongue,” and even that’s an acceptable inclusion within the context of the whole. Now if you’re one of the hardheads who just won’t accept a Wu-Tang Clan album unless you hear GZA on a track, you’re going to be sorely disappointed. If Raekwon is your favorite member and you wanted his bars on multiple songs, you’re going to be sorely disappointed. Pick an example of what you think a Wu-Tang album should be, and it’s possible that “Legendary Weapons” doesn’t have it. Then again it does what it can do well, and should be highly commended for it. If this is the Wu-Tang of the 2010’s, we need more albums like it.