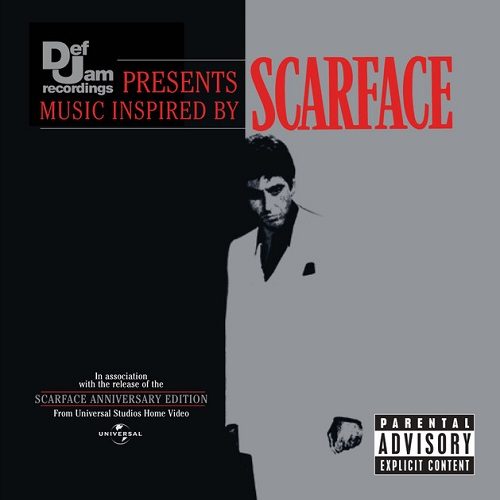 Unless you just got back from an interstellar vacation to Upsilon Andromedae (44 light years away from Earth) odds are you’ve at least HEARD of the movie “Howard Hawks classic, the modern day version left a far more indelible print on the hip-hop generation. In fact, if you’re one of the many people who recently picked up the 20th anniversary DVD release, you probably noticed a segment on disc two where various rap artists recounted their experience seeing the film and how it profoundly impacted their lives and careers. Hell, one is even NAMED after the flick.

Why does the film resonate with urban communities, rap artists, and rap fans alike? There are a multitude of reasons, but three are chief among them. First, Al Pacino’s dynamic (and admittedly over-the-top) performance as the Cuban gangster Tony Montana. Even before The Source coined the idea of a “Hip-Hop Quotable,” Montana was himself the voice in everybody’s mouths. “This town is like a great big pussy, just WAITIN’ to get fucked.” “All I have in this world, is BALLS, and my WORD.” Et cetera. It’s no wonder that dialogue from the film is among the most sampled in hip-hop. Secondly, Montana’s story is the kind of rags-to-riches tale everybody can relate to. He came to the United States as a poor immigrant, and rose up to be the kingpin of one of the nation’s largest cocaine empires. This leads directly to the third and most important factor of all – the downfall of Scarface. If the saying “power corrupts and absolute power corrupts absolutely” has any truth, it’s in Montana’s increasingly erratic behavior. Rampantly paranoid, refusing to trust even his own best friend, and breaking the rule “don’t get high on your own supply,” Montana’s ego and vanity become his own undoing in a climactic violent finale. It’s an object lesson for both neighborhood pharmeceutical representatives and rappers alike – don’t let money change you or greed blind you.

“Def Jam Recordings Presents Music Inspired by Scarface” chronicles how these factors and more have been introduced into two decades of hip-hop music. This is largely not a compilation of original music, but rather a selection of songs which Def Jam either owned or licensed to showcase the Scarface influence. The album starts just like the movie, with the Fidel Castro intro where he ships off all unwanted Cuban criminals to the Florida coastline. In a stroke of genius, the song that follows is Mobb Deep’s “It’s Mine” featuring Nas – a song which was built entirely over a sample of the title credits music. The song was dope in 1999, and it’s still uncut today. It’s followed one of only two new songs on the album – Cam’Ron’s “Yeo.” Unfortunately, it has none of the energy of the Debbie Harry “Rush Rush” which appeared in the film and which producer Charlemagne samples. It’s worth skipping over this song to hear the dialogue snippet which includes the Harry song in the background, which includes two “lessons” about being a drug dealer. It was this segment that inspired Christopher Wallace to pen the classic rap song that follows it on this album, the “Ten Crack Commandments”:

“Rule nombre uno: never let no one know
how much, dough you hold, cause you know
The cheddar breed jealousy ‘specially
if that man fucked up, get your ass stuck up
Number two: never let em know your next move
Don’t you know Bad Boys move in silence or violence
Take it from your highness (uh-huh)
I done squeezed mad clips at these cats for they bricks and chips
Number three: never trust no-bo-dy
Your moms’ll set that ass up, properly gassed up
Hoodie to mask up, shit, for that fast buck
she be layin in the bushes to light that ass up
Number four: know you heard this before
Never get high, on your own supply”

Next up is the Scarface song “Mr. Scarface,” one of the many rap songs which borrows directly from the film – in this case taking Montana’s “All I have in this world” dialogue and looping it for the chorus. Ironically, the equally ill Jay-Z song “Streets is Watching” that follows samples from an entirely different film called “Sleepers.” Still, there’s no denying that the ex-dealer Jigga drew the sense of paranoia that infects this song from Pacino’s inspired lunacy as Montana degenerated towards the film’s end. Another dialogue snippet is inserted here, and film fans will note they were not arranged in chronological order – this one occurs BEFORE the previous snippet. Still, it serves as the perfect lead-in for the N.W.A. classic “Dope Man,” since it’s the scene where Tony and Manolo learn of a big Columbian drug deal they can be part of. You’ll notice that Ice Cube also references the “don’t get high on your own supply” rule, showing that from the East coast to the West, aspiring rappers everywhere drew the same inspiration from the cinematic masterpiece.

The “You Wanna Go to War?” interlude that follows is a dialogue snippet near the end of the movie, where Montana openly (and foolishly) challenges his South American connection to come after him. “Criminology” by Raekwon featuring Ghostface Killah used this same snippet in the intro, so it’s inclusion immediately following is no surprise. Then the album’s other original song, “Pusha Man” by Joe Budden, makes an appearance. The only problem is that by referencing the Curtis Mayfield classic, Budden seems to be more inspired by “Superfly” than “Scarface” here, so the inclusion makes little sense. The compilation gets back on track though with the vintage old school song “White Lines (Don’t Do It)” by Grandmaster Flash & the Furious Five. Like “Scarface” the song is a much borrowed and sampled source of hip-hop inspiration, which is not surprising given that it too is two decades old. “Something like a phenomenon?” Indeed.

Following the infamous “balls and my word” film snippet as another dialogue interlude, The LOX song “Money, Power, Respect” is included. This is somewhat odd, given that the track’s title and Lil’ Kim’s intro both reference a completely DIFFERENT section of the movie, where Manolo and Tony are strolling the beach discussing how to seduce beautiful women. Even though all the recycled hip-hop songs included are dope, there are times like this where the organization of them and clips used to support them could have been rethought, so that it came off as dope as the intro and it’s Mobb Deep companion. Still there’s no reason to front on how ill the cuts that follow this one are: “A Bird in the Hand” by Ice Cube, “Good Times” by Styles P, “1-900-Hustler” by Jay-Z and the Roc-A-Fella Fam, and “Bad Boyz” by Shyne and Barrington Levy. Even without the “Scarface” theme to tie them together, the tracks included here would make a fine mixtape to push in your whip any day. The lone mistake to this reviewer would be putting the mediocre “DipSet Anthem” by The Diplomats on the album, although Def Jam makes up for it by including the Mobb Deep classic “G.O.D. Pt. III” to close the disc. It does seem like an odd choice though, since although the song samples from the Scarface soundtrack the title and chorus were clearly inspired by the GODFATHER films. One should have given up making sense of the structure anyway. Judged strictly as a selection of dope rap songs, “Music Inspired By Scarface” is still a winner.