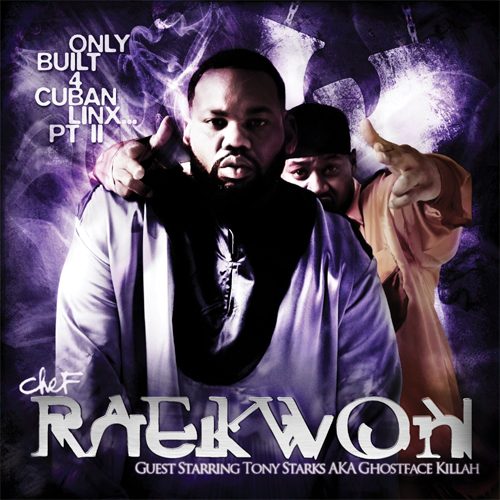 Raekwon the Chef has been cooking this one up for 14 years. Ever since the release of the seminal classic “Only Built 4 Cuban Linx…” Wu-Tang Clan fans have been clamoring for a worthy sequel to the original. There’s no one to blame but Rae for the fact it’s taken so long to enter this new chamber. In the interim since the original, every rap head’s Top Chef has been cooking up some very unusual cuisine. “Immobilarity” was praised lyrically but fell completely flat musically, and the album’s bizarre title became the punchline for a million bad jokes. Rae attempted to get some momentum back by embracing his Lex Diamond alter ego, but the mainstream retail wasn’t up to par and it was largely left to hardcore Wu fans to support the release. With a six year span from then until now, some fans might have rightfully believed that Raekwon gave up his solo career aspirations altogether.

It’s impossible for “Only Built 4 Cuban Linx… Pt. II” to recapture that magical moment in August of 1995 when Wu-Tang seemed to have the entire hip-hop world on lock and every solo album held the promise of brilliance, nor can it make up for the errant career path Raekwon has followed since then. Put those negatives aside though because “Pt. II” has a lot to offer and many pleasant surprises in store. In fact one of the positives of the long interim between the original and “Pt. II” is that Wu-Tang’s core membership has become increasingly willing to embrace producers outside of RZA and his disciples. That’s not a knock on Robert Diggs, but if variety is the spice of life, our Chef has certainly embraced new flavors to the fullest here. West coast meets East coast on the Dr. Dre laced “Catalina” featuring Lyfe Jennings, rolling along over hot piano chords and a simple but effective clap beat. Dre even managed to produce his own version of the trademark Wu-Tang “buzz” in the background just to let you know the killer bees are still on the swarm.

This isn’t even Dre’s best track though as comes in heavy for “Nigga Me” featuring Busta Rhymes. The guest rapper blazes here, telling listeners with no exaggeration that their union is “so euphoric, document this moment, shit is so historic.” The late great J Dilla makes his presence felt on the old school Clan revival “House of Flying Daggers” featuring Inspectah Deck, Ghostface and Method Man. The soulful reminiscing over Ol’ Dirty track “Ason Jones” also has Dilla’s deft touch, eerily apropo given both left their physical form behind and are only still with us in the spiritual essence. Light a candle while listening. That’s not to say RZA has been left off “Pt. II” or that his contributions aren’t right up there with Pete Rock (“Sonny’s Missing”), Alchemist (“Surgical Gloves”) or Erick Sermon (“Baggin Crack”). In fact by keeping RZA’s chambers on “Pt. II” fewer and farther between, his focus seems to have been sharpened, allowing him to give Raekwon the very best beats and make their dishes more delicious. “Black Mozart” lives up to the title as Inspectah Deck and RZA make cameos over his track, and the whole song feels like a lost chapter of the “Kill Bill” story. The pre-release leak “New Wu” thankfully survived to the official album, and RZA’s harmonized backdrop is doo wop meets hip-hop in another Clan reunion that will spark 1990’s nostalgia. “Fat Lady Sings” is one of the album’s shortest songs, but the sizzling violins and simplified slow tempo bop give Raekwon the perfect format to narrate one of his cinematic street stories.

By the time the album reaches the concluding “Kiss the Ring” produced by Scram Jones, you’re left wondering whether there was one bullet in any chamber that didn’t fire successfully. They didn’t all hit the bullseye, but none of them missed the target either, and Raekwon seems to have found his mojo again as the Wu’s pre-eminent orator of “Criminology.” He paints vivid lyrical pictures with his commanding yet often soft-spoken flow, featuring just a hint of lispy vocabulary which only adds spice as opposed to making him harder to understand. In days gone by Raekwon would have obsessed over inventing new slang for the heads to copy and recycle, but his flow has matured to the point he just wants to make soulful songs that share his inner thoughts. Whether happy or sad, violent or playful, ready to go to war (the Necro produced “Gihad”) or seek redemption (“Have Mercy” featuring Beanie Sigel and Blue Raspberry), Raekwon runs the gamut of emotions but always keeps an overriding dark tone to his gritty reality – and that suits him just fine. One can’t fairly make the claim that “Pt. II” picks up right where the original left off, but this is the best Raekwon we’ve heard lyrically and musically in a long time, and barring a late entry this should be the best Wu-Tang related album of 2009.