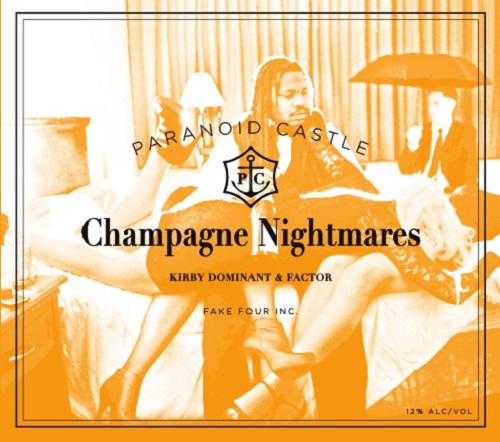 Building a fort or a castle is inherently paranoid. It suggests a level of fear from the occupants within – they expect to be attacked by some opposing (possibly savage) group who will take anything of value within. It doesn’t matter what’s inside really – it could be gold, it could be food, it could be royalty, it could be women and children. All that matters is that it’s worth protecting at all costs. Build the lookout towers higher to survey the landscape for invading forces. Build the fortress walls higher so they can’t easily be scaled. Dig a moat around it so that attackers have to ford the water to reach you. Wood is good, stone is better, and steel is the shit. The more you have, the more paranoid you can afford to be. That’s why rich people live in secluded enclaves like The Hamptons and Greenwich and keep their money hidden in Swiss bank accounts. That’s paranoia personified. Hide your kids, hide your wife, and hide your assets because they takin’ every dollar out there.

Producer Factor is, pun somewhat intentional, a known factor in underground hip-hop. You don’t have to look far or hard to find albums he’s done with the likes of Awol One and Ron Contour (Moka Only) among others. Rapper Kirby Dominant is a little more elusive. To keep what could otherwise be a long story short, this Bay Area rapper was at one time on the fast track to the grave, braving bullets and jail time in pursuit of a quick buck. He eventually decided to give higher education a try, only to wind up spending his financial aid for Berkeley on producing and recording albums. One can only assume he knew something his family didn’t and would have argued vociferously against, but it worked out pretty well for Kirby – he’s gotten good reviews and done both solo albums and collaborative projects for the better part of the last ten years. “Champagne Nightmares” is in fact his second album with Factor, the first having come out way back in 2004.

“The unfadeable Kirby Dominant is goin federal
The reason I mention it so that you can let your girl now
She get my attention well then, it’s gon’ be a problem
I ain’t trippin cause I’m into problem solvin
I’m lovin the women but still I keep ’em revolvin
like doors of course until, I produce an offspring
And even then I still might be down for big fun
We can all share, like that dude on Big Love
I’m up in the club, poppin hella bottles
I ain’t got no models, bitches with stretch marks
But whatever though, I’m an animal
Drivin you crazy like a Fine Young Cannibal”

“Audacity of Me” is perhaps not endemic of the Paranoid Castle experience as a whole, but it is instructive in illustrating a few things about the group anyway. Factor’s music on the track is a mixture of sharp vibrant drum beats with ambient swirling background noise, loosely resembling a melodious form at times, but it isn’t until an extra layer of synth jumps into verse two that its shape is obvious. Kirby is spitting quickly on the track, but not tripping over his tongue, and while he’s being braggadocious there’s also a sardonic humor to it, as though he may be mocking the very convention he seems to be celebrating. Kirby has the stature of E-40, the dreadlocks of Bob Marley, and a vocal tone best described as a mixture of Del the Funky Homosapien and mc chris. So yeah, he kinda sounds a bit like a nerd, but these days what used to be nerdy is the new chic. Regardless you won’t mistake him for Rakim or Chuck D.

There’s clearly a chemistry between Factor and Kirby that has led them to collaborate in the past, and results in a natural yet slightly warped chemistry on “Champagne Nightmares.” Factor’s biggest strength may be that he doesn’t allow his beats to dominate Kirby or hide his voice, and that balanced and nuanced mix gives Kirby even more power as a verbalist and vocalist. He’s certainly not obliged to do so, as in some respects he might be the more known of the two, but that deft touch allows Kirby to be as Dominant as his name while still tapping into the paranoia that makes up their group’s name. You can hear it clearly on “Feeling Inside,” a song in which Kirby seems to be in love with his success, yet doubtful that the good times will roll on forever:

“It’s kind of difficult to describe the way that I’m feeling
It’s like I’m on top of the world, yet under the ceiling
of a casket, things in the past have been tragic
POOF, I wanted to disappear like magic
And it won’t go away and the tears are sporadic
And I’m probably one drink away from becoming an addict
Lonely habits of depression I reckon
I could conjure up more questions
But fuck it! I’m lucky, I’m still here living
And I got a lot of homies and the women wanna kick it”

Most swag rappers don’t take the time for introspection about their lives, nor do they question whether or not they are filling the void in their soul with conspicuous consumption, but Kirby is far from typical and that’s what makes him far more interesting. I can’t remember the last rapper who used a whale as metaphor for himself – not in the “big roller at the casino sense” but in the “big animal isolated in the deep ocean” sense on “Orca.” “I feel like a whale, I look like a whale/I drink like a whale, can’t you fuckin tell?/I’m drownin in the sea of life.” Now that really is deeper than Atlantis. Perhaps song titles like “You Don’t Understand” are apt, since some people are just not going to get where Kirby Dominant is coming from. He even prefaces songs like “Weed Man” with declarations like “This song, is kind of ironic.” Who does that? Kirby does.

It’s hard not to recommend Paranoid Castle to everybody reading except for one thing: it’s just not going to be boom bap enough for some or macho enough for others. The open-minded will definitely enjoy the Paranoid Castle experience all will appreciate that champagne CAN be a nightmare and not just a symbol of opulence. Success and wealth can also be hell.