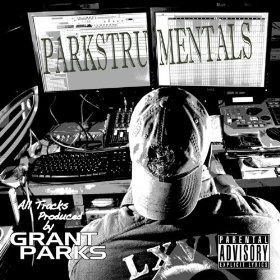 I didn’t know what to expect going into “Parkstrumentals,” the latest album from Chicago producer Grant Parks, as I’m always a little skeptical of albums that feature a number of instrumental tracks. Unless the producer really brings something unique and creative to the table, the beats often feel empty without an emcee to spit over them, leaving the listener unsatisfied. And with 12 of the 19 songs being purely instrumentals, I was worried that there would not be enough depth to keep the album interesting throughout. On the other hand, though, “Parkstrumentals” features several big names in old-school hip-hop, including Masta Ace, Sadat X of Brand Nubian, General Steele of Smif-N-Wessun, and even KRS-One. I had high hopes that, given the strong supporting cast of guest emcees, “Parkstrumentals” would be a throwback to the boom bap sound of the golden age that has disappeared from mainstream hip-hop today.

The album starts off with a short but sweet intro, featuring vibrant piano keys and a heavy drum beat, but Parks takes a step backward with the first full length instrumental, “State of Consciousness.” With a weak, run-of-the-mill drum kit and an eerie but otherwise unremarkable synth, things quickly grow repetitive, and I started to have doubts about the rest of the album. Luckily, though, things quickly turn back around, and while not every beat is up to par, Parks delivers a handful of solid old-school instrumentals.

On “Cornerstone,” Parks uses sampled drums to create an authentic sound, and a powerful uplifting horn sample drives the track, giving it a soulful flavor. “Put Em Up High” has a similar upbeat feel, with gliding orchestral strings laying the foundation and a high-pitched vocal sample thrown in for accompaniment. “Fragments,” on the other hand, has more of a jazzier sound, with a flowing piano atop a steady set of drums and a few other samples scattered throughout to keep things fresh. Perhaps the most complete instrumental, though, is the bass-heavy “Lux Life,” which features a hard-hitting snare and an aggressive synth. The funky acoustic guitar pluck is a perfect complement to the hardcore feel of the rest of the track, and a pulsing electronic synth rounds it out. While several of the other beats throughout the album have a somewhat repetitive feel that quickly grows old without an emcee present to spit a verse, there are certainly a number of instrumentals that can hold their own as independent tracks and showcase Parks’s talent as a producer.

Some of the best moments on “Parkstrumentals,” though, come in the form of verses from an impressive group of guest emcees that Parks assembles for the album. “The Rap Game” features Bobby Rockwell, Kenny Bogus, and the legendary Masta Ace spitting over a smooth but hardcore instrumental about the problems of making a living in the hip-hop business, with selling out as the only option for many emcees looking to strike it rich. K. Sparks absolutely tears apart “They Want More,” spitting two verses full of tongue-twisting lyrics over a rolling bassline and an upbeat set of horns. On the flip side, “The Berry Lounge” is one of the mellowest tracks on the album, with slow piano keys, a simple but effective drum beat, and a jazzy trumpet sample on the chorus that meshes well with A.G. of D.I.T.C.’s laid-back delivery. “So Refined,” also has a more relaxed feel, with meandering grand piano chords and a deliberate drum pattern setting the tempo, and Phil G spits an impressive first verse, rapping:

“The elegant embellishment be effortless
See I’m the quintessential measurement to pessimists
Tryin’ to size up my excellence
‘Cause they know I bring a breath of fresh air just like a peppermint
Better get your act together baby before you step to this
You rockin’ with the hottest shit outta Chicago pimp
Who be the most prominent, yo
Who keep it poppin’ like pop rocks and bottle rockets
Who be that mayhem accomplice named Phil G
Who got the tendency to bring the energy throughout the vicinity”

In the end, while “Parkstrumentals” is far from flawless, the album certainly has enough of a boom bap feel to warrant a listen from fans of hip-hop’s golden age, who will be happy to find several familiar faces throughout the release. The instrumentals on the album are somewhat of a mixed bag, with a number of quality beats and a few unexceptional repetitive tracks that don’t bring much to the table. What makes the album, though, are the tracks featuring vocals to go along with Parks’s beats, and the only song that really disappoints is “Know Your Role,” featuring Sadat X and Grand Daddy I.U. For the most part, Parks is able to construct beats that match each emcee’s flow, and the result is a number of quality tracks that give the album some depth. It’s certainly true that the album could do without a few of the instrumentals, but if you’re an old-school aficionado simply looking for some hard-hitting beats, then “Parkstrumentals” is worth checking out.