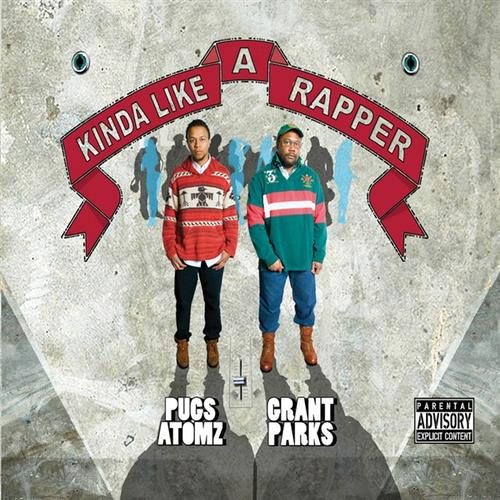 Resilient Windy City native Pugs Atomz is back again – back from a recent European tour with DJ Vadim and back in record stores with a brand new LP entitled “Kinda Like a Rapper.” The title is a curiosity we’ll address in a minute but even more curious is the fact this time Pugs Atomz has a partner in crime by the name of Grant Parks. Parks doesn’t have his partner’s reputation as an up and coming rap spitter but he does have a who’s who list of rappers he’s produced beat for – A.G., Grand Puba, KRS-One, Sadat X and Twista among others. Working with one producer often adds a quality and consistency to albums, along with allowing an emcee to focus on his writtens instead of where the next beat is coming from, so in theory this move can only make Pugs even better.

Now the $64,000 question – why does Pugs Atomz declare he’s KINDA like a rapper instead of boldly proclaiming his decade+ years of paying dues on the rap scene? Pugs is making fun of the expectations of what a rapper is supposed to be, meaning he’s kinda like the stereotype non-rap fans would have of rappers, but ultimately far beyond those limited expectations of guns, money and drugs. To hammer this point home Pugs poses for the album cover in the kind of hand knit sweater with oversized sleeves people get as Christmas gifts from Aunt Pawdab – as thoughtful and snugly warm as it is tacky and impossible to wear except at a holiday dinner. He rocks these threads with pride though, refusing to strike a mean mug pose, possibly embarrassed but not near as much so as he’d be creating a fake tough guy image. “Pay No Attention” expresses those ideals clearly in a flow that’s as much whispered as rapped, over a beat sounding tailor-made for Twista:

“Now I was just laid back like minding my own
Call on the phone, I just ignored it
Never know who might, darken your doorstep
Troops like ah baby, please pass the forceps
Eight all around me, I move like Dorsey
It’s in the chatrooms, it’s in the blogs
It’s in the front row, it’s at your jobs
It’s in the eyes, it lies in the lies
I try to ignore it but it gets enormous
Like back in high school, tryin to find cool
Like I can’t find you, may I remind you?
I’ve done it all too, salty like DAMN YOU
What can a man do? Stand on his own
Make his own lane, not listen to lames”

Pugs is definitely moving down his own path, a hater free road to artistic independence. “All Right” has a mellow vibe of reverberating keys and sharp clave notes, where he declares that it “feels magical when you’re doin it right/wish I could bottle it and sell it on sight.” That it does. “Yes I Did” sounds a little church in a good way musically and lyrically, as Pugs states his claim that the song’s protagonist is what the female he desires was looking for all along, in the process making the same claim for his rap. His punchlines can be a little left of center on tracks like “Stereo” when he declares “Pugs is back like spinal columns,” but it’s that unconventional style and a subtle Chi-Town tone to his delivery (a 70/20/10 mixture of Rhymefest, Kanye and Twista) that helps him stand apart from the crowd.

The union of Pugs Atomz and Grant Parks can be summarized like this – when the proud native from the City of Broad Shoulders teams with Grant Parks on the track he’s not “Kinda Like a Rapper” – he very clearly IS. One can’t be too quick to heap praise on this tandem though, as there are times when Parks loops can become repetitive and occasionally sound like a parody of other more famous beatsmiths – “Forever” and “All Y’all” immediately come to mind. There’s nothing inherently unpleasant about it or any one track that’s just outright awful, but there’s a slight tendency toward mediocrity that one would notice more clearly without Pugs Atomz rapping. “Kinda Like a Rapper” is kinda good, but it kinda leaves you feeling it could have been even better.