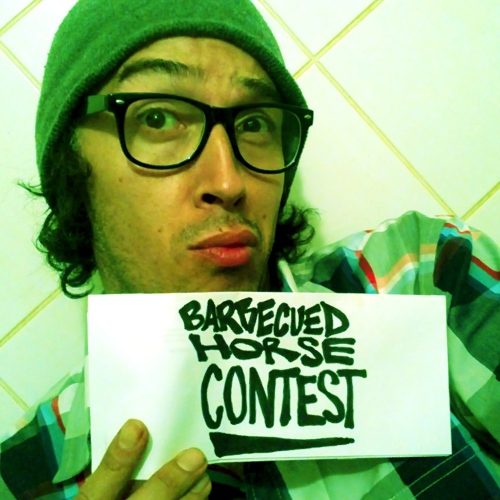 Emcee, producer and all-around man of mystery Moka Only is back with his latest album “Barbecued Horse Contest.” This title is clearly going to offend some people at the outset, but if you think the Vancouver based artist gives a shit, you’d be mistaken. He enjoys challenging, confusing and befuddling even his most loyal of fans. In fact on this very website M.O. gave us an interview where he insisted his alter ego Ron Contour was in fact his cousin and not him, and we played along with it (to a degree). When you are as talented and artistic as Moka Only is, you can get away with that sort of thing, because people presume being eccentric/weird/colorful/reclusive/bizarre goes hand-in-hand with being talented. One can certainly make a compelling case for that when studying both the behavior of and works by famous artists ranging from Vincent Van Gogh to Wesley Willis. Let’s just put it like this – you don’t HAVE to be an oddball to be artistically gifted, but it probably doesn’t hurt.

Moka Only doesn’t speak on this latest release, so it arguably could have been released as an album by Ron Contour or any other nom de plume he wanted. The entire 15 song, 34 minute long album is instrumentals sprinkled with samples from pop culture sources and Moka’s own personal library of sound. Admittedly it’s fun trying to pick some of them out and identify them, one of the things that’s harder to do when you have a lyricist flowing over the instrumentals. Rarely do they ever relate to the title of the album, nor for that matter does the cover of this release (thankfully) show a barbecued horse. The closest to a direct reference is the song “Barbs n’ Cues,” which other than a single reference at the end is not about barbecue either. Instead an unnamed interviewer seems to be soliciting patrons of a jazz festival, asking them what instrument they’d like to be – or sleep with. The set-up obviously comes from a sketch comedy series on TV or YouTube, where a camera crew follows somebody around acting like a normal interviewer only to ask bizarre things and see how people in public react to it. Inexplicably this all gets interrupted by Jon Lajoie’s “Show Me Your Genitals 2.”

Song titles that might at first seem to be typos actually aren’t. I double checked “Portland, Organ” before this review to make sure. It’s not about Portland, it’s not about Oregon, but it could be about an organ – either a musically synthesized instrument or a part of the human body. I do hear a horse neighing now and then, and the sound of Darth Vader’s air breather, among other things. Some samples are solely offered for their humor value and do relate to the song title though such as “The Plural of Jazz,” which lifts snippets from a YouTube video called Ghost Brother by Sunset Television. As the album moves onward you find yourself drawn into the layers of sampling and the headnodding beats that Moka Only provides, entering an atmospheric relationship with the sound going beyond individual samples on any track. Songs can change direction mid-stream – “Noodle Expansion” goes from a breezy keyboard and crisp drum sound, to a heavier stepped down jazz bass, to marimbas which disguise a harmonized chorus singing “you be there, we’ll be there.”

Albums like “Barbecued Horse Contest” are as enjoyably to listen to as they are mystifying to easily define. A short explanation would be that if you enjoy well-produced, jazz influenced, hip-hop instrumentals with esoteric samples this album is for you. A longer explanation would be that Moka Only thinks the sound of an oncoming train on the railroad tracks is just as right as a good beat on a musical track, and on “All You Need” he sees no need to separate the two into individual components. There’s something akin to how a painter works with a palette here – while he/she may have many individual colors to work with, it’s how those colors are blended together before being brushed onto a canvas that creates art. Moka Only’s paintbrush approach to instrumentals makes for an invigorating, occasionally challenging, but always interesting album. You won’t get any lyrics here, but you won’t regret the lack of them in any way. If this is how a horse gets barbecued, perhaps it’s not such a bad thing.