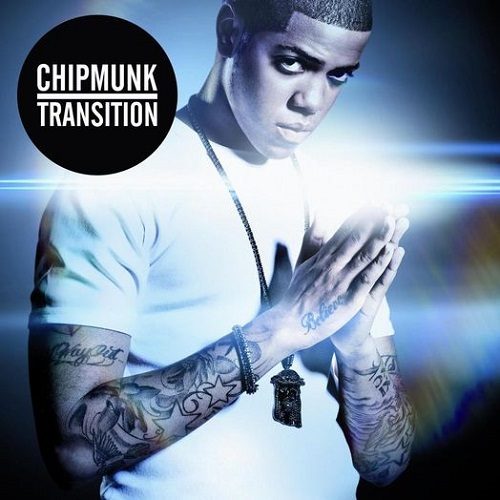 It’s interesting that we are kicking off “UK Hip Hop Month” on this site with “Transition” – the second album from 20 year old rapper Chipmunk – as, out of all the works we shall be reviewing over the next few weeks, this is by far the “most American” by quite some distance. The UK release was all the way back in April, with it touching down in the US mid-July, and it fits in perfectly with the current sounds on Stateside radio. As for Chipmunk, his debut (“I Am Chipmunk”) was a runaway chart monster with four big singles, going platinum in the process and a blueprint for success that has been carbon-copied by British labels ever since. Fortunately, he’s (wisely) decided not to rehash the winning formula, instead opting to rewrite the rules from the ground up. Great news for us; bad news for his label.

Whereas “I Am Chipmunk” was extremely poppy, with radio friendly hooks and teenybopper moments aplenty – understandable, given his age – his sophomore effort is different in every single respect. Recorded almost exclusively in the States, we find him collaborating with the American producer H-Money. Given that H-Money executive produced “Transition” and also laces ten out thirteen beats, this is almost a throwback to the 1980’s – where the DJ produces and the MC spits. So you should know early on that this album gives rise to the birth of a new star producer, for H-Money really delivers the goods. Sure, he has done bits and bobs before, but this is a new level for him, and he’s stepped up with aplomb: “Transition” is a musical treat, as the instrumentals mesh perfectly with the tone and ambition of the artist. The melodies are outstanding, it all flows so well together from front to back, and it’s infinitely repeatable.

It may seem strange to give props to the producer before the supposed star of the show, but after a few listens, you realise that it is only fair. Chippy and H-Money just work so well together, evident from the off. The title track is the perfect way to start, ultimately heading towards the cracking military beat of “Follow My Lead” featuring new singer Eric B on the chorus – one can’t be sure if these are ironic titles and names (err, ERIC B and FOLLOW ++ MY ++ LEAD?). But if you can forgive this bizarre transgression, it’s a strong number. Possibly the most strange instrumental is also the most melodic, with “Flying High” missing the mark as a single (it was the subject of much ridicule, initially, and failed commercially) but within the album format, it works brilliantly. Next up, the track that helped put Chris Brown back on the map, “Champion.” Of course, “Deuces” pre-dates it but here Breezy does the chorus AND spits too (the first time he did so on a single). It’s a solid enough verse, but truly notable for the genuine confessional feel: “I used to see my momma getting beat down… Is that the real definition of ME now?” The song is a six minute epic, and superb in every way.

Parker laces the next beat with a cleverly stripped-down Fruity Loops feel, leaving Chipmunk to carry the whole song – fortunately “Foul” will possibly be many a listeners favourite joint, a cocky and confident number with the kind of chorus that rappers will be kicking themselves for not thinking of first. Keri “The Kiss of Death” Hilson shows up to once again prove the theory correct on “In The Air” – a failure of a lead single, but definitely a solid album track. One of the best songs follows, with the Dready-produced “Then & Now” feeling reminiscent of that incredible title joint from Game’s “Doctor’s Advocate” (featuring Busta), as a lush beat, cracking chorus and introspective lyrics really stay with you. “White Lies” is a decent effort, but perhaps the first misstep of the album – the chorus just doesn’t quite fit the beat, and it doesn’t add much, although Chipmunk is better than average. Dready pops up for his second beat with “Every Gyal” – a supposed dancehall number featuring an interesting chorus from Mavado. Unfortunately the beat just doesn’t work well enough – it’s just about passable within the confines of “Transition” but it’s missing a kick.

It’s followed by the incredible “Take Off” featuring man of the moment Trey Songz. The Arabic strings are a winner, the chorus fits and the whole song is a success – it’s one of those songs that has bubbling for a while and just needs a push to make it hit commercially. The final stretch of the album is somewhat variable, with “Armageddon” (featuring Wretch 32) demonstrating lyrical prowess but a beat that just sounds a touch too light; “Picture Me” falls into an almost identical trap, and is probably the weakest number, although Chipmunk does a good job on it; and things wrap up perfectly with “Pray For Me” – it fits well into the theme of the album, the sonic feel and the sense of drama, as Mr Munk spits acapella at the end.

There are a few obvious things to note. It has not done well commercially, and it’s easy to see why. “Transition” is an incredibly “American” album delivered by a British artist, and that was never going to sit well with a UK fan base becoming emboldened and fiercely nationalistic, with “more British” sounding artists charting with regularity. It’s also an LP that doesn’t particularly care for singles, as it takes the art of making a coherent and interest long play SERIOUSLY. That is great news for us, and for album lovers in general. However, his record company must be pretty pissed off, and preparing some sort of Deluxe Version with a tacked-on pop single to remedy the situation.

It must also be said that Chipmunk’s way of rhyming is in a transitional phase, too. When he first burst onto the scene, it was rapid fire grime. Then, it was faster paced pop rap. Now, he’s spitting couplets in a very “#Hashtag Rap” way, and it’s initially really quite disappointing – put it this way, if you listened to the album once, you’d think it was wack. But after a while, you realise that he is slowly redesigning his art into a more universal flow – it’s just that he is going to have to work harder in order to balance writing VERSES that contain memorable couplets, writing songs, just pure spitting… It’s a massive learning curve, and he falls a touch short on “Transition” but it’s forgivable because practically the whole album works so well. Plus when he asks us to imagine how good he’ll be when he is 25, it’s an entirely valid point – he’s only 20, and if he keeps improving, works incredibly hard and learns how to balance it all, people might look back at “Transition” as the underrated gem it is, not to mention a glimpse as to the potential this lad has.

If you recall the parting shots in my review of “I Am Chipmunk,” virtually every point has been addressed: this doesn’t sound like an effort to please his label; there aren’t too many guests; the production is brilliant (the very antithesis of “patronising”); and Chipmunk genuinely sounds happy and proud at the end, like he’s actually achieved something special. He has. Almost half a year on, this has easily become one of the most well put-together albums of 2011, and a pure listening treat (particularly musically). It’s just unfortunate that so few people think so, because they are the ones missing out on the true definition of what an album is supposed to be.