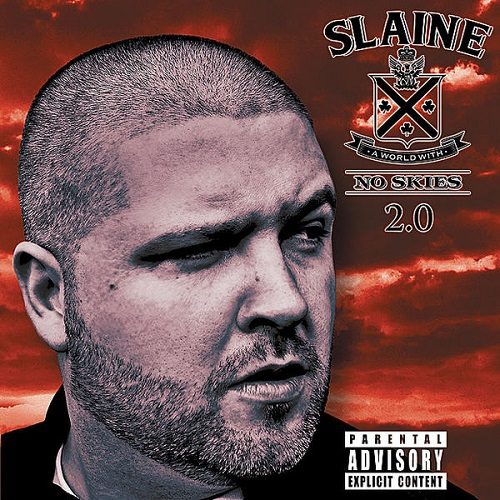 If you’re getting deja vu right now, don’t blame The Matrix. We originally reviewed “A World With No Skies” back in January 2011, right at the moment the long-delayed album seemed to be on the precipice of getting released.Suburban Noize sent us a shrinkwrapped promo copy straight off the production line, with only a notch cut out of the side to denote it was for review only, and online retailers were taking pre-orders to ship “as soon as the product is available.” We found the album to be well worth the wait and gave it 8 out of 10 overall.

Unfortunately for all of those people who pre-ordered the album, the ship dates came and went, and most orders were canceled. A few lucky people from Slaine’s fan club got the original version of “A World With No Skies” in the mail, and most of the rest of the public was S.O.L. Blame whatever you want on the fact an album that got all the way to the manufacturing stage didn’t get released to the masses, but the usual suspects are sample clearances and other labels objecting to guest appearances. To my surprise the SubNoize fam sent us a SECOND copy of the album, appropriately dubbed “2.0,” baring a sticker on the cover letting us know this was the “F.Y.E. exclusive deluxe 2CD edition featuring 5 bonus tracks.” Despite the obvious similarities in the cover art, it was clear this edition of “A World With No Skies 2.0” with a whole new disc worth of songs needed to be reviewed.

Let’s get the similarities and differences between the original release and disc one of the new release out of the way first. “1.0” had 18 tracks, “2.0” has 16. “1.0” started with “A World With No Skies,” while “2.0” starts with “Black Horses.” One of the samples clearly at issue was from “Voices of Apocalypse” – the new song interpolates the sample Mr. Eon used on “The Half” instead of sampling from the same source, and the song winds up four seconds longer as a result. “When I Shoot You” is also four seconds longer, but it’s much harder to discern the difference. After the first four tracks the two versions diverge radically, as “2.0” has four straight songs not found on the original: “Zombie,” “Can’t Go Home,” “YOU” and “Jumpin’ Out the Window.” The Silvamore produced “YOU” is the best of the bunch – it’s a minimalist piano ode to anger with Slaine voicing his frustrations with the whole world that seems to be against him:

“Do I stitter-stitter-stutter, who’s the idiot that muttered
The cocksucker who hated on me, every word I uttered
Who had the balls and the ego to be called an amigo
Like they down for the cause, but we saw shit and we know
You a faker, a phony, a fraud, guess they don’t know me at all
Can’t even look in my eyes, you ain’t my homey or dawg
You just a bitch and a snitch, you just a fag with no balls
I’ll throw my fist in your face, watchin you stagger and fall
You sick of my fat face? Sick of my fat basslines
and unapologetic rhymes that I spit cause I’m sick of (YOU)
In this rat race, I’m stuck at a fast pace
So everybody back up and fall in line, yeah I’m talkin to (YOU)
With this anger, that’s fuelin my engine
When I’m back with a vengeance, to aim every sentence towards (YOU)
I’m breakin in windows, and hoppin the fences
I’m here lookin for (YOU, YOU, YOU, YOU-YOU, YOU-YOU, YOU)”

Some of the omissions on this new version are worth being as angry as Slaine about. The excellent “Landscapes” featuring Reef the Lost Cauze is now missing in action. Statik Selektah’s productions have disappeared – “The American Way” and “Mistaken Identity” are gone forever. I wish you could hear the slick uptempo Sicknature beat for “Body of Christ,” but forget about it. Another victim of this re-release is the Q-Unique produced “Crillionaires” featuring Ill Bill and Q himself. While Q didn’t get his spot back on “2.0,” Bill does find his way back onto the new version on “The Boulevard.” The new track is a boom bap stompie co-produced by Lü Balz and Silvamore, and the all-star lineup includes Blacastan and Sean Price:

Sean: “P! The earth maker, the earthquaker
The Doctor Killpatient is urgent to nurse pager
My fifth fire first, motherfucker the first blazer
Asiatic, black man, fan of Fantasia
Boot Camp Clik, Nike all of my life
Might ball up my fist hit you with all of my might
BOW!!!!”

While there are a few similarities between the two albums on disc one, it’s on the second disc where things diverge wildly. NONE of the songs from the “F.Y.E. exclusive” are on the original version: “Unstoppable” featuring JL, “The Most Dangerous Drug in the World,” “What it Feel Like” featuring V Knuckles, “The Problem” featuring XL and “Insomnia.” There are no liner notes or production information available for the bonus disc tracks as of this review, but the harrowing “Insomnia” is the best among them – the kind of dark and moody hip-hop Slaine does best.

“Lately I’ve been feelin stifled by my addictions and reckless ways
Drownin in the depths of depression dreamin of yesterday
Breathless haze starin out the window while the record plays
Before the penmanship pennin lyrics in second grade
Let’s just say I was raised holdin onto silent rage
’til the day my anger manifested to my violent ways
And now they’re here to stay, they keep tryin to hibernate
They never sleep, I never sleep at night, I’m always wide awake
I try to make a break away, but I’m always pulled back
The winter’s cold, my knuckles are red, I rock a skullcap
I walk the streets at night, slidin on the ice
My own reflection in the sidewalks I’ve been fightin all my life
I’ve been writin all my life, schoolbooks to bar napkins
Product of froze streets, cool crooks, and hard rappin
I hear your palms clappin, I hear your cars crashin
I hear you livin and dyin this is how stars happen”

In an ideal scenario “A World With No Skies 2.0” would be entirely equivalent to the original CD, with the new and additional tracks making up for the lost or removed ones. If I could tell you that was 100% true I would, but there’s no mistaking the fact that “Zombie” is an inadequate replacement for “Landscapes” and “Can’t Go Home” doesn’t go far enough in making up for “The American Way.” Don’t get it twisted – the new songs aren’t horrible – they just sound like they belong to an entirely different album. This becomes self-evident when you hear politically incorrect jokes about Ryan Dunn on the second disc, given his accident just occurred in June of this year.

I understand both the temptation to save what could still be used from “No Skies,” particularly given what must have been the cost of the studio time to record them, but the odd juxtaposition of wholly new songs next to salvaged and re-recorded cuts from “1.0” is disconcerting if you were fortunate enough to hear both. This won’t be nearly as much of a problem if “2.0” is the only version you ever heard, though the number alone would make you curious as to what was on “1.0” – and sadly, you missed out. They should have just done a whole new album from scratch, given that for over 50% of this album they did anyway.