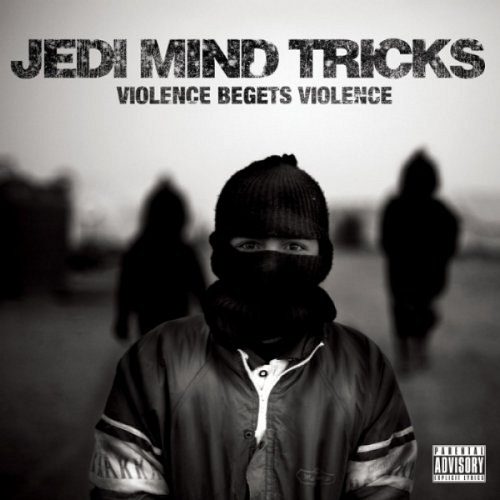 “Yes, I am evil
Not a hundred percent, but I am evil
Evil has always existed
The perfect world most people seek
shall never come to pass
And it’s gonna get worse…”

The introduction may explain the philosophy of Vinnie Paz as well as any song he’s done, but it doesn’t BEGIN to explain what’s going down on Jedi Mind Tricks’ “Violence Begets Violence.” While Vinnie Paz has been more than willing to embrace outside producers on his solo projects, the hallmark of albums like 2008’s “A History of Violence” has been the deadly lethal musical production provided by Stoupe the Enemy of Mankind. To be fair we all had to know this couldn’t last forever, and after a fourteen year run dating back to when Vinnie was called Ikon the Verbal Hologram, it’s time for the Jedis to learn a few new tricks.

Yes, that’s “Jedis” plural, because just like the last JMT album, you can count Jus Allah as a member of the crew. He was rolling as a member way back on their second studio album “Violent By Design” but amicably parted ways with JMT and was absent for the majority of their run on Babygrande Records. It appears that he’s back for good now, though to be honest I disagree somewhat with my colleague Complejo that the group suffered without him. To me Vinnie Paz grew into his own as an emcee during the interim, becoming a true verbal pugilist who used the guttural flow of his esophagus to spit phlegmy acidic tracks on wax. In many ways he became the prototypical underground emcee – the rapper who would never look and sound pretty enough for the mainstream that honestly didn’t give a FUCK if they ever liked him and rapped like it.

Throughout the fourteen tracks of “Violence Begets Violence,” Paz continues to display the ferocity and anger that made him such a fixture of the underground, where self-styled nicknames like “O’Drama Bin Laden” seemed entirely apt. It’s hard to argue he’s not the star of the album given his penchant for foul-mouthed punchlines and visually disturbing imagery, but on tracks like the C-Lance produced “Burning the Mirror” we do see Jus Allah holding his own:

Paz: “I’m Kool G. Rap, Kaczynski and God wrapped in one
I keep a stupid bitch around me just to stash the gun
Fuck a crucifix, I’ll use it just to stab a nun
What y’all have did is incomparable to what Paz has done
I’m Black Sabbath, you savages get a lashing tongue
I’m black magic and ravenous, you a passive crumb
I’m a Russian AK and youse a gatling gun
I only listen to black metal and raps from Pun”

Allah: “My babysitter hung herself, I was way too young to help
There’s no way I coulda lifted her and strung the belt
Wish she coulda gave me somethin else, cruel summer
But I’m always elated to meet the newcomers
I like to stare at models, to compare brothels
Puttin air in bottles, sharin pot and Aristotle
With the baddest dime, inhalin the traffic line
And we don’t talk about pastimes and astral signs”

Besides expanding their production sound beyond Stoupe, the group also features more cameos than on previous albums, many of which will be completely unexpected to the listener. Now you’d definitely expect members of the Official Pistol Gang like Demoz to rap on the Junior Makhno produced “When Crows Descend Upon You,” and friends from Army of the Pharaohs like King Magnetic on “Imperial Tyranny.” Those make perfect sense and they’re flowing on typically hard hitting JMT beats. Things take a turn toward the Outsidaz though when Pacewon and Young Zee rap on “Design in Malice,” then get REALLY wild when seminal Fu-Schnickens rapper Chip Fu helps the Jedis go Carribean in sound and style on “Chalice.” The Illinformed melody may be mellow, but Paz is still spitting hard:

Paz: “Everybody think it’s sweet is now Obama out here
He the third cousin of Bush, he lyin out here
You the lamb, I’m the motherfuckin lion out here
Where were y’all when my step-father dyin last year?
I’m once in a lifetime, Hailey’s Comet out here
Gods and Earths and more as we Islamic out here, yeah”

The key to the success of “Violence Begets Violence” is the tracks that offer what Stoupe would do, even when Stoupe isn’t there to do it. In that sense Nero may be best equipped to claim the title of his protege, because “BloodBorn Enemy” 99.9% captures his style, down to the eerie menacing sounds driving by you on the beat, and the feeling you’re trapped in a pounding hip-hop horrorcore dungeon of doom, right down to the Rakim scratches in the chorus promising “a kill or be killed kind of attack.” Shuko also shows himself to be a worthy replacement on “Weapon of Unholy Wrath,” and even C-Lance captures his tendency to be brutal yet beautiful with “Willing a Destruction Onto Humanity.” I was initially skeptical of a JMT album that didn’t include ANY production by Stoupe, but “Violence Begets Violence” lives up to the standard set on previous albums and won’t disappoint their large cult following.