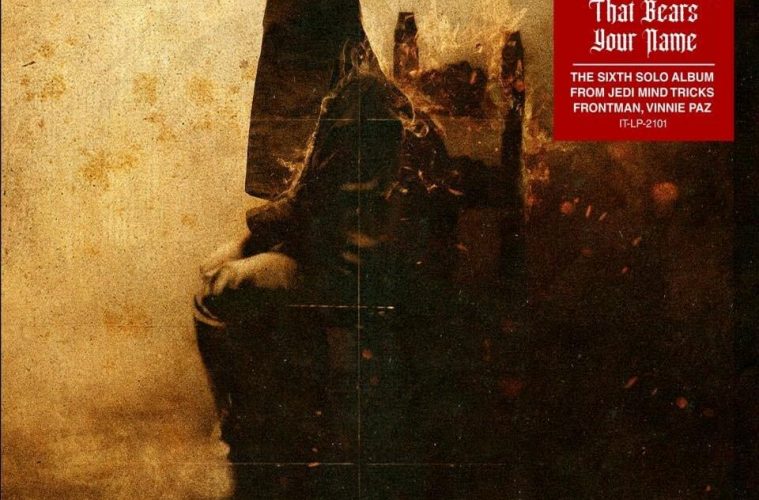 Burn Everything That Bears Your Name

Vinnie Paz :: Burn Everything That Bears Your Name

Purists may cite Jedi Mind Tricks as a trio (Stoupe, Vinnie Paz and Jus Allah) and they did reunite in 2008 but for the bulk of their career, Jedi Mind Tricks records have essentially been Vinnie Paz records. Stoupe does provide a unique soundscape for Vinnie that has never really been replicated, but Vinnie’s style has been fairly similar since 2003’s excellent “Visions of Gandhi”. Looking back at the Vinnie Paz discography is genuinely overwhelming for any new listeners but the records specifically released as Vinnie Paz solo albums (not under the JMT moniker) do have a different feel to them. They possess more personal storytelling and it shows more depth to Vinnie’s usual style of spitting pure vitriolic hate. He had outgrown those limitations that came to define him.

My own opinion on Vinnie’s style is that his earlier work was more creatively written, even if it was simply spitting hot 16s. The line that always sticks out is “I’m savage, I write rhymes in pitch blackness, any motherfucker that fronts is left backless” from 2000’s “Genghis Khan”. There’s some neat wordplay there but it’s the vivid imagery combined with that vicious delivery. It’s a great recipe that has been the engine behind much of Vinnie’s success. If you want some hard shit, you throw on some Vinnie Paz. It didn’t so much matter what he was saying, it was how it was written and how it was delivered. In fact, if you read too much into what Vinnie is saying, you’ll want to check he doesn’t have all these guns he boasts of because it’s pure psychopath rap. The best verses are where Vinnie strayed outside of the realms of reality (“I’m the one that hammered the first nail in Jesus”) and into the sublimely ridiculous (“I got degrees in being ignorant and weaponry”). When Vinnie is sublimely ridiculous, he’s often ridiculously sublime.

Much like his collaborators RA the Rugged Man and Apathy, Vinnie increasingly includes songs covering more mature themes like mental health and fatherhood that a young Vinnie Paz (or Ikon the Verbal Hologram) would have looked down their nose at. So there has been growth where some may criticize him as being one-note, but it’s a growth often at odds with what makes Vinnie unique in the first place. One minute he’s craving murder, the next he’s offering parental advice. It’s a balance that Vinnie has successfully managed but other than a couple of tracks, this is primarily hardcore kill-kill-killl Pazienza. Boxcutter Pazzy.

“Burn Everything That Bears Your Name” is the sixth solo album from Vinnie and it’s as solid as you’d expect. You’ve got the usual producers here (Stu Bangas, C-Lance, Scott Stallone) that have given Vinnie that tough industrious sound in the 2010s that is different from what Stoupe’s dramatic offerings provided.

“Danger Is My Business” sticks out as a highlight, thanks to Oh No’s dramatic production that sounds like gridlock at rush hour. You can imagine Vinnie stomping through the streets tearing up the concrete and causing carnage, which is where he has always excelled. The same could be said of “Torchbearer” with its Ghostface Killah hook – Vic Grimes lends it a really satisfying swing you can’t help but frown and nod to.

A solo Vinnie Paz album clocking in at 69 minutes is going to be an arduous listen for some, but the guest verses help break things up. Willie the Kid, an underrated emcee if ever there was one, blesses a haunting Giallo Point beat on “Battle of the Camels” with some Wu-Tang-like philosophy. Giallo really nails that Stoupe style – I’d love to hear more Vinnie and Giallo.

The trademark reflective moment arrives with “I’m Thinking of Ending Things” that’s got a solid if underutilized piano loop. It’s a welcome break halfway through the record (which is a hefty 22 songs), as is the CZARFACE style “Don Eladio” that provides something different for Vinnie to rap to. I really like the pure savagery of “Warhead” as it harks back to the raw stabs of “Put ‘Em In The Grave” (a JMT highlight). It’s great to hear Chino XL continues to eat up microphones, although the “you’re pussy like Erykah Badu’s perfume” line is really played out at this point.

Billy Danze pops by to share some “Machine Gun Etiquette” but without Lil’ Fame, his guest verses often fall short and while the beat slaps hard, it doesn’t pack the punch it should. Block McCloud and Ill Bill do their thing but I enjoyed hearing the likes of Jay Royale and Eto more – they offered something different and the latter in particular has the best verse on the album. Also, Eamon’s voice is an acquired taste and on “Angels With Dirty Faces” it leans dangerously into corny.

If you’ve followed Vinnie’s career, it’s easy to feel numb to much of his music in 2021. Once Vinnie found his successful formula, his records have largely sounded similar as the Philly veteran finds himself in a “damned if he does, damned if he doesn’t” situation. A Jedi Mind Tricks album was distinguishable, unique even. But more importantly, it was entertaining. A Vinnie Paz album rarely meets the heights of them great JMT records but they always feature plenty of tough tracks that will have you feeling like you can punch through brick walls. It’s something few artists can pull off and Vinnie does it effortlessly with another worthy addition to his extensive catalog.