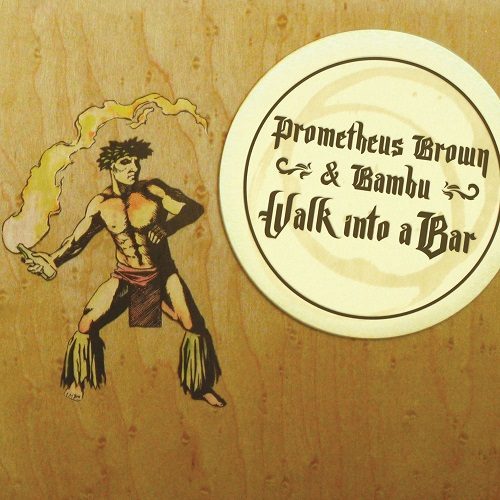 Before jumping into the deep end of the pool on this album, it probably helps to know that Prometheus Brown is also (and arguably better) known as Geologic from the acclaimed Blue Scholars crew out of Seattle, WA fame. Bambu also hails from a recognized hip-hop group, he of Native Guns fame (their name an admitted parody of the Native Tongues) from Watts. Both rappers are known for being politically active in their respective communities, with both Bambu and Geologic credited for speaking out about Filipino issues while crafting dope hip-hop tracks. Bambu in particular is recognized for using Taglish in his raps, a mixture of both English and Tagalog, the latter being a widely spoken language in the Philippines. Few popular rappers in the U.S. can say the same, with apl.de.ap of the Black Eyed Peas being a big exception.

Despite their being outspoken and politically active, Prometheus Brown and Bambu are not without an impish and playful sense of humor in their raps. They salute their heritage and wink at Jay-Z at the same time by declaring “All brown, ah-ah-all brown everything” on “National Treasure.” They also show the kind of baldfaced affection for a fly and famous actress not seen since Slug & MURS created odes to Rosie Perez and other fly honeyhips on their collabo albums. “Rashida Jones” was a good choice – she’s definitely a looker who stands out whether on small screens like The Office, or Hollywood film screens like The Social Network. The song incorporates rapping, singing and even a little bit of AutoTune crooning, while producer Budo provides a delightfully understated beat so the emcees can be disarmingly charming:

“I’m down to chop it up, was your dad around
or was he out of town?
I know he from the town
What was it like when ‘Pac was around?
Or Michel Jackson came around?
Was he still brown?
You wanna talk about something else now?
I said alright then, you ask the question
Oh okay alright I’d love to meet your boyfriend”

Did I forget to mention that Rashida is also Quincy Jones’ daughter? My bad. It adds another level of humor to the song to know that they’d be flirting with her while simultaneously asking invasive questions about the famous artists her dad produced. Even serious sentiments can be expressed in a humorous way on “Walk Into a Bar,” such as the Osna produced opener “Fuck Dog the Bounty Hunter,” with lines like “Make me want to shoot my TV up/Duck Hunt.” The song flows like a Curtis Mayfield funk jam from the 1970’s, making it that rare hip-hop combination of intelligent and witty while also making you want to head bop. Pop culture references come at random and smack you in the face, like rallying against capitalism and jingoism with “Off the top, Jimmy Snuka to that ruling class/cause I never liked, Hacksaw Jim Duggan, with his goofy ass” on “At It Again.”

At only 35 minutes in length, “Prometheus Brown & Bambu Walk Into a Bar” is over far too soon, though at least it can be argued that it’s a pure uncut hip-hop hit not bogged down with fillers or skits. From Just D’Amato’s heavy bottom and sparkling pianos of “Mahalo,” to the militaristic drums and echoing vocals Fatgums provides on “Lookin Up,” to Vitamin D helping them get funky at “The Bar” while simultaneously raising it for other emcees, this album fires on all four cylinders and is a quick high octane burst of dopeness. If that means the gas runs out too soon, all you have to do is hit rewind to get another fill, because it’s worth going back to hear more.