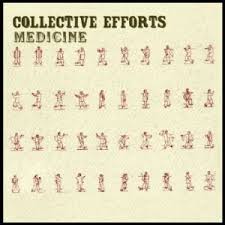 Do not listen to this album while driving a vehicle or operating heavy machinery. That message should be slapped on the jewel case of Collective Efforts’ new album “Medicine” instead of that omnipresent message Parental ADVISORY Explicit Content. The four man group that has been paving its way through the Atlanta underground jungle for years avoids the use of swearwords altogether, but decided to go with lullabies instead.

You ought to have respect for the way Collective Efforts (CE) have been working ‘hard to earn’ their reputation in a Gangstarr sort of fashion. They have performed on many shows and tours, and dropped numerous studio albums to provide for the vinyl backbone of all the live stuff. That attitude has brought them a dedicated fan base, with whom CE keeps in touch through their beautiful, professional looking website. The group lets their admirers have a say on new tracks or remixes, and keeps in touch with them in a way that every music artist should. No doubt, they will be ultimately pleased with the newest ‘effort’ of their favourite foursome, MC’s Ben Hameen, Bambu, Dj Creashun and, last but not least, mc/producer J-Mil.

Outside of that select groupof fans, not a lot of people will feel like they have just been hit with a brick after listening to “Medicine.” The album starts off with a solemn piano riff over which CE kicks it off with the lines: “Clap your hands everybody, and everybody just clap your hands.” A momentous jump-off indeed, but perhaps they could have gone for something you don’t hear everyday during an average open mic night. They continue with:

“Sit back, relax and let the CD play
This is an introduction to the CE way
The way we live, the way that we stake
Dedicated to the rhythm and the music we make”

Did you feel the brick? … How about now? A bit under the belt, I know, but unfortunately the first track “Introduction” is exemplary for most of the eighteen tracks on this record, including the two hidden ones. MC’s Ben Hameen, J-Mil and Bambu De Asiatic have a story to tell that goes well beyond the thoughtless contemplations of the random thug-in-the-club. Most of the time however, the tales the three Atlanta MC’s want to share with their listeners don’t seem to rise above philosophical chatter. Their intentions and ideas sound sincere, but creativity is something they forgot to include. It’s like being stuck reviewing the application letters for a new desk clerk, and all the letters sound exactly alike. It’s not like each applicant hasn’t put a lot of effort into his letter, but after the first couple of sentences your mind starts to wander off and you reach for the next one, forgetting the one top of the pile you just read.

But this is not a job interview, but an album review. In the music department, CE have concocted a melodic formula that works well for the MC’s. The beats sound serene and soulful with an important role for live instrumentation and laid back piano samples. DJ Creashun cuts are precise and abundant, and a comparison with an act like the Los Angeles-based People Under the Stairs is within reach. CE misses P.U.T.s’fuzzy funkiness, and all they end up with is dreamy lounge music. The spacey sounding “In Your Mind,” with the pretty guitar solo is the occasional exception to the rule.

Esteemed co-reviewer Pedro ‘DJ Complejo’ Hernandez concluded after listening to CE’s last album “Trail Mix”: “With 25 tracks, this release is one of the few cases where an artist might have given fans too much. Cut down to 15 tracks, “Trail Mix” could have been much more impressive.” Without trying to be a copycat, this record suffers from the same problem as the mixtape before it. If CE had been more strict when selecting their material, they could have murdered some of their darlings, and would have ended up with a better enjoyable album. “Medicine” is more of a sleeping medicine than a melodic remedy, and should be considered excellent background music on a lazy afternoon in the hammock. This is a headnodder, but it’s the kind of nod you make when you dose off in the sunshine.