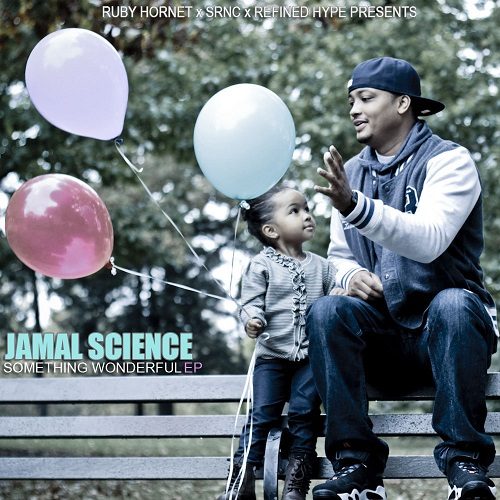 Chicago’s Jamal Science is the type of rapper you can feel okay about playing in hearing range of your kids. His “Something Wonderful EP,” unveiled as a free download earlier this month, features eight tracks worth of nostalgic, soulful production and unpretentious, harmlessly righteous lyricism. Jamal’s not reinventing the wheel here-he’s somewhat of a street scholar, delivering conscious rhymes with a hint of been-there-done-that wistfulness, but he’s impressive from a technical standpoint and the music is consistently rich. Just check out the bright, funky instrumentals of “Life Is Like a Jungle,” where Jamal shines between a chorus constructed with Nas and Grandmaster Flash samples:

“Lookin’ through the eyes of a man who’s seen it all
It’s fuckin’ with my mind, makes me wanna not see at all
See my people fall victim to the street life
Girls sellin’ their bodies, leanin’ against the streetlights
Niggas tryin’ to hustle but tryin’ to avoid three strikes
I feel like Jay sometimes, this can’t be life
Temporary layoffs, but now they’re permanent
It ain’t no good times in the hood, nobody earnin’ shit
Schemin’ just to make some money to eat
Doin’ what you gotta do to make it out on these streets”

“Dreams” is an ethereal-sounding introspective song reminiscent of music from Blu & Exile’s “Below the Heavens,” and “The Power Of” is a headier track exploring material evils of urban living:

“Niggas’ doors open up, winos waitin’ to get their sip on
Throwin’ back some Thunderbird, laid on the curb
Tryin’ to speak, but his language is slurred, mumblin’ words
Gettin’ crazy, fightin’ the air, yellin’ at birds
Like that chick from the Hitchcock flick, zonin’ out
On some hip hop shit, dancin’ to the tunes in his head
That hundred-proof got his eyes lookin’ half dead
Pants hangin’ off his ass, walkin’ round screamin’
This his town like Mister Sinatra
Chuggin’ a fifth of vodka
Hundred proof smilin’ with a chipped tooth
Leanin’ across the liquor store tryin’ to bum change
Politickin’ with all of the other bums that hang
By the liquor store, drinkin’ Wild Irish Rose
By the liquor store, even when the store closed
By the liquor store, thinkin’ ’bout your next sip
Losin’ yourself in the midst, the power of the liquor”

DJ Tune’s “Recognize” is a sunny, piano-heavy track with sharp vocal cuts, and “The Becoming/Rose” is a two-part opus featuring a self-examination followed by a female characterization over a separate beat.

Jamal Science doesn’t win too many points for originality, but he’s a skilled, precise rapper with his heart in the right place. The jazzy instrumentals throughout “Something Wonderful EP” make it an effort befitting of its title-a feel-good listen serving as an enjoyable introduction to the MC.