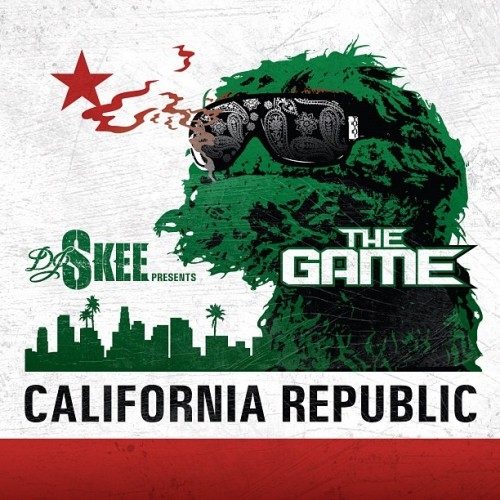 Sooner or later the “music store” as we all knew it growing up is going to be obsolete. I’m not saying this as conjecture or speculation; I’m going on the record as saying it WILL happen sooner than later. I can personally attest to the fact that half of the albums I buy these days are downloads, another 30% are free download’s like Game’s new “California Republic” mixtape and maybe 20% at most are physical compact discs. Even two years ago the ratio of physical to digital would have been 50/50, and five years ago it would have been 80/20. I still like the oversized cover art and needle driven analog sound of vinyl, but compact discs now seem like an unnecessary intermediary step between me and my MP3 player that takes up storage space.

I bring this up largely because the audio input jack in my whip and albums like “California Republic” are largely what bring me to this conclusion. A CD player in the ride is still nice occasionally, but the proliferation of free downloadable mixtapes has all but made the idea of buying hard copies from a street vendor or retail store extinct. Even rappers who started their careers long before the digital revolution took over have caught on. They know you can have a hundred or more albums on your MP3 player, and it takes up less space in your ride than just a couple of CD releases do – and you can’t put a CD in your pocket either (not without breaking it anyway) when you get out said vehicle. The new game (pardon the pun) is to put out enough FREE downloads to appease your fanbase, then drop a retail album through a major label every once in a while they’ll be happy to buy since you broke ’em off so much quality music for nada. It’s a competition for your hard drive – whoever gets the most space wins the cyber race and is likely to profit from it sooner or later.

The competition for that space is fierce given that even retail downloads from sites like Amazon.com

are pretty cheap these days – most under $10 and quite a few go on sale for $5 the week they are released or shortly after. It’s almost like nuclear proliferation at this point – every free album is armed to the teeth to compete with their well funded record label counterparts. “California Republic” is the logical extension of what’s been going on for a long time now – giving away free shit you would have paid for just a few years ago. Game’s cover is a little silly – looking like Oscar the Grouch smoking a joint while wearing John Morrison’s shades – but this album is deadly serious. It’s not just that Game is releasing music for free, but PHARRELL produced music for free. “When My Niggas Come Home” features Snoop Dogg too:

Game: “I got a nigga locked up, for about another month
He did nine years, he’ll be home before I finish this blunt
(What else?) I just bought an ounce of skunk
Me and my nigga ’bout to go hard like when LeBron dunk
(Yeah) We +Ridin’ High+ like Southern niggaz in the dump
And e’rybody and they momma know U.G.K. in the trunk
(What’s in the backseat?) North Cakalak’ freaks
And the shit that we smokin can melt the Mac on they cheeks”

Snoop: “One thing you can count on when you touch down
You gon’ have it all, laid out, everything is paid out
Comin home eventually, you in the penitentiary
The homies like to mention me cause I looks out, essentially
[…]
My cousin Flip been locked up for 25
And Dre-Lo, he’s a real 20 Crip for life
Now if I mention yo’ name, you know the business cuz
When you get it – you know we livin it up!”

Now obviously like any good mixtape, not all of the beats here are going to be originals. “Red Bottom Boss” featuring Rick Ross employs the same Just Blaze beat as Drake’s “Lord Knows,” but the lyrics from Jayceon Taylor are a good fit on the beat and give a little insight into some of his beefs:

“I’m ’bout to tear this fuckin track out
Pretend that it’s Keri Hilson and blow her fuckin back out
Twenty-second mixtape, half of ’em diss tapes
But fuck who I was dissin cause I never made a mis-take
Bleek got what he deserved, Jay I mighta been trippin
I was fallin, I was slippin; he was Jordan, I thought I was Pippen
He was winnin, I was losin; he threw a jab, I start bruisin
So I, threw in the towel just to separate all confusion
Ivy Blue is beautiful, me sayin that’s unusual
That’s just the father in me, don’t think I’m tryin to be cool wit’chu”

When you look at the amount of artist cameos and read the production credits though, even the recycled beats add up to an incredibly large amount of value for something that costs NADA to download. I count four songs produced by Cool & Dre, three songs featuring Rick Ross, four songs produced by AND featuring Pharrell, and a who’s who of other hip-hop stars who are participating: Drake, Ace Hood, Meek Mill, Busta Rhymes, Lupe Fiasco, 2 Chainz, Fabolous and Fat Joe just to name a few. Some newer artists get several chances to show out too – like Lifestyle, who you can hear on “The Logo,” “Come Up” and “Hit the J” among others (quoted below).

“Different J’s, different locs, different days, +Different Strokes+
I smoke that shit that made +Arnold+ and +Willis+ broke
You know my lifestyle, Swishers in them light styles
Bitches in the White House, red Camaro piped out
I’ll be iced out, my blunts be packed in
I’ll smoke them ’til there’s no more, I’m like the Pac-10
I’m ’bout to pack ten bitches with them accents
Then we ’bout to pack twelve Swishers in that black Benz”

Game has been accused of being a name dropper in his rhymes in the past, so if you don’t like hearing about Dr. Dre, LeBron James, Diddy or Lil Wayne then you might want to start looking elsewhere right now. Personally it doesn’t bother me so much since more often than not they’re part of a punchline like “me and my nigga ’bout to go hard like when LeBron dunk” so that’s fine with me. On the other hand, I don’t need to hear “Detox” teased for about the thousandth time, because I’m not sure Dr. Dre is ever releasing it nor that I could still care by the time he finally gets around to it. I’m lying – I’d still buy that on CD, that is if the CD format still exists by that time. Sure you can burn “California Republic” to a disc if you want, and even use a color printer to make a tray insert for it and that Oscar the Grouch artwork to slide in the front, but I’m not going to. I already have a plethora of Game’s albums in hard copies as it is, so I’m endorsing this release even if I’m slightly concerned he gave away a little TOO much.