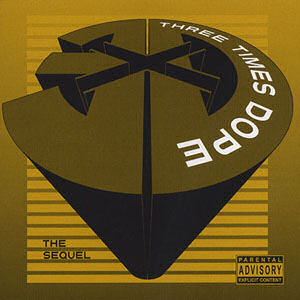 The term ‘sequel’ often raises the question “To what?” In this case, there are two options – Three Times Dope’s “The Sequel” was meant as a follow-up to either the first album, “Original Stylin’,” or the second, “Live From Acknickulous Land.” The evidence at hand suggests that the North Philly crew meant to go back to their heydays in the late ’80s when they had the rap world’s attention with the singles “Greatest Man Alive” and “Funky Dividends.”

Recorded around 1994, “The Sequel” spent a few years in the vaults before it got a limited run in 1998 in two different formats (the CD being labeled “The Sequel 3”) and on two different labels. In 2011, it is being reissued under the resurrected Joe ‘The Butcher’ Nicolo imprint Ruffhouse Records.

While EST (acronym remains unsolved, something with Sinister) still kicked the rhymes and Chuck Nice (not to be confused with the comedian of the same name) did the beats, DJ Woody Wood was replaced by DJ Jake Da Stripper (it’s probably too late to suggest a name change). After the short big band introduction “Enter Acknic[k]ulous Land Intro,” the first song, “Hell Yeah It’s On,” indicates that the previously inoffensive 3-D had updated their formula with the hardcore data:

“I hope that you wear a fat lyric-proof vest
Nigga, cause I’m about to bust rhymes like a Tec
Then I’m out like shout in a turbo ‘Vette
Sucka, as you’re lyin’ there wet
with nothin’ but a promotional package and a bunch of cassettes”

But where other rappers between ’89 and ’93 flipped the script completely and banked on profanity and violence, EST adjusted only his vocabulary, despite the aggravation stressing, “I like to be at peace with my brothers.” The next song introduces the album’s main theme – ‘freestyle type rhymes’ as a vehicle ‘to go back to the essence of Hip Hop,’ as the liner notes put it. “Off Da Head” is the second track that mentions something called Ill Kids Inc. and likely features contributions from its members. With incomplete credits, it’s difficult to figure out the album’s guest list, but appearances of RuggedNess, Ve Borne and Crush are confirmed. “Off Da Head” is typical of its time, the jazzy groove and the hook “Off the head – that’s how the rhyme is said” propelling the cypher. “Kick Dat Style” is similar, just musically darker, while EST goes for delf on “Freestyle Mania,” sending the track “out to all live freestylers worldwide” over a sparkling Chuck Nice beat and the looped Leaders of the New School chanting “Many styles, many styles.”

A few songs also cover specific topics. “See You Like Dat” is a polite, PG-rated joint about wanting to see the object of your desire in the buff. On “I Got the Cash” ES contemplates fame (“I know the story too well…”) and on “Sadly Missed” he reminisces about fallen friends, also slipping in these cautionary words:

“You can have props and mad money
ride around, flex downtown when it’s mad sunny
blow your horn at the honeys in they poom-poom shorts
or roll by the old basketball courts
– and get smoked
Just that fast you out, loc
leavin’ your squad grievin’ and your old lady’s heart broke”

Musically “Sadly Missed” may be a touch too depressed, and guest producer RuggedNess also doesn’t fare all that well with the title track, particularly considering that it hopes to succeed “Greatest Man Alive.” Still if the effort to return to the glory days falls flat almost entirely, EST is to blame, who throughout the album is the proverbial shadow of his former self. Given the pedestrian flow and verbiage on the track, the self-description “The rejuvenator, takin’ tracks apart with shock therapy to jump start your heart” applies only to “the one that used to rock that ‘fro to the side with the original slang,” not this 1994 version of EST.

There is one exception, and that’s the closer “Real Skills.” The producer laces a melodic, booming track, the DJ throws in L.L. Cool J scratches, and the rapper musters all his experience and expertise to sum up the past and present of their career:

“I’m 23 and look about 18
I hit skins in a Benz on my sweet 16
And at the ripe age of 20
was gettin’ more money
than I knew what to do with
– and blew that shit
[…]
Started like a jewelry
Kid, they made a fool of me
Sellin’ me that fake carat shit for top dollar, G
I used to sport it like a S on my chest
like a damn royal crest on the top of my vest
I made a lot of bad moves when I was younger
But I was gettin’ loot and wasn’t thinkin’ ’bout hunger
To divorce it our label started doin’ that dumb shit
Promotin’ our material like it was that bum shit
Then they wanna bitch about recoupin’ they profits
But we survived that, cause them cats can’t stop hits
It’s all about independence
plus a couple kids you know with the dough to make investments
I pull capers with the movers and the shakers
the ghetto legislators that can orchestrate the paper
As I formulate the flavor to make the party bounce
graduatin’ out the ghetto with Swiss bank accounts”

Rare is the rapper who admits to being conned with fake jewelry and wearing it proudly under the assumption that it’s real. With more such insight, “The Sequel” would have been a noteworthy addition to the 3-D catalog. Without it, it struggles to keep up with just about any random release from that era. Instead of original stylin’it was “Like Wu-Tang I’m nothin’ to fuck with” and jacked beats from The Beatnuts (“Gimmi[e] Dat Beat”). In theory, Three Times Dope had it right. As the hook to “Real Skills” goes: “People don’t forget when you got real skills, remember that / See, all we had to do is come back.” That’s how it should be. But when your once sharp skills have gotten rusty in the meantime and you think you can cover the fact up with cuss words, you’re bound to set your fans up for disappointment. If a reissue makes such strong arguments as to why the album wasn’t properly released the first time around, it’s hard to see the point of it.